Nightbreed is the greatest movie of all time 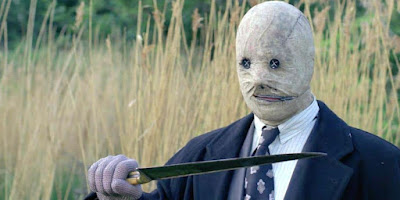 Nightbreed. The Director's Cut. Apparently people didn't like the original.

"Everything is true. God's an Astronaut. Oz is Over the Rainbow, and Midian is where the monsters live... And you came to die." I loved this movie. It is batshit, but interesting and visually insane. It is at least equally as good, and way more fun than Clive Barker's better-known hit, Hellraiser.

Released in 1990, most people thought it sucked. Considered a "dark fantasy horror film," it stars Anne Bobby as the female lead (only know her from this but she was in this weird show I watched in the early 1990s called Cop Rock), Doug Bradley (Pinhead from Hellraiser), David Cronenberg (the director of The Fly among other things), Charles Haid (do not recognize), Hugh Quarshie (don't recognize him either), and Craig Sheffer (the quarterback from The Program). Sheffer plays the lead. People bought a lot of Craig Sheffer stock in the 1990s. I wasn't among them, though he is solid here. 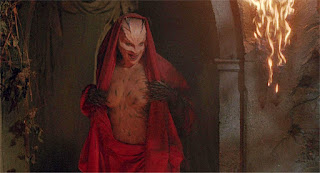 Gist is a mental patient played by Sheffer is led by his shrink, played by Cronenberg, to believe that he is a brutal and truly terrifying masked serial killer. Fucking sweet mask, I shit you negative. Anyway, the police catch up with him while he is hiding out in a cemetery named Midian. This post escape from said mental institute where a buddy of his rips off the skin from his head. It's pretty much comedy with the guy handing it to Sheffer with a move like, "well, here ya go." (Check out the video of that below.)

Turns out a group of monsters (who look fucking awesome) called "Nightbreed" hideout and maybe eat humans in this Midian place. One of the monsters tries to eat him but just takes off a chunk of flesh. Figures, might as well go with the cops, but Cronenberg sets him up saying he had a gun. So the cops do what they do and shoot the fuck out of the guy. But after getting bit, he becomes Nightbreed. This causes some issues and all hell breaks loose over the last act of the film in a big fucking way. 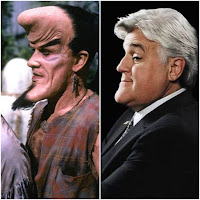 So, yeah, the monsters look amazing. One freak has a straight-up Jay Leno head. It was to the "point" where I googled "Nightbreed" and "Leno" and this came up.

Another favorite was the one with dreads that looked metal as fuck. Then there was the "hot" one. She was like a porcupine/human hybrid. I liked how at one point she chick killed a dude with one of her poison quills and then this maniac cop who saw it all go down looks over at her. She is topless at this point and he is all like BOOBS! and he goes to grab them and dies. Fucking hilarious.

Some serious action when everything goes to shit in that last 3/4 of the movie. Talking massive explosions, the earth opening up and swallowing trucks, trigger happy cops and militia types mowing down monsters just because (of course they are the real monsters), flamethrowers, monsters flipping cars, bazooka friendly fire. It's a half-hour of carnage.

Cronenberg is great in this. Whoever designed his mask and the Nightbreed is a fucking genius. Clive Barker's vision was fucking sick as well... But I'm giving the MVP to the Boston Terrier. Such a sweet, cute, good boy. Bostons are the best. Always.