Vampires vs. the Bronx is the greatest film of all time 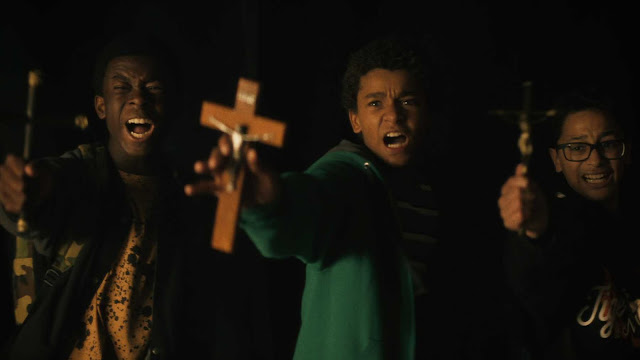 Yo, check out the courthouse. They are turning it into apartments. You know how this starts. White people with canvas bags. That is always the first sign. Pretty solid flick. Had some Attack the Block vibes. Not quite as good though. Sort of falls apart a little at the end. Still really fun though. For sure recommend this new flick available to stream on Netflix now.

Rotten Tomato Consensus: In the sharp, socially conscious battle of Vampires vs. the Bronx, comedy and horror blend brilliantly -- and the audience is the winner.

Gist is that a group of kids from the Bronx fight to save their neighborhood from vampires that are moving in and trying to gentrify their block. Pretty solid social commentary as well as a comedy horror movie.

Directed by one Osmany Rodriguez. Looks to have done a lot of TV and shorts, but this one of his first, if not the first, feature film. He also wrote it with another guy. Mostly follows around three dudes that are 15ish. Playing these parts are Jaden Michael, Gerald W. Jones III, and Gregory Diaz IV. I've seen none of them but they are all great. Also in their crew is one Coco Jones, who is female. All of the acting is pretty great.

Other's you'd recognize include Sarah Gadon who plays the head vampire. I mostly know her from the Stephen King adaptation of 11.22.63. She plays the role of Sadie Dunhill, the female lead. She's a pretty lady. Method Man, who plays a no-nonsense priest. Chris Redd, who is just some dude on the block. And a vampire or two sort of stick out.

Like I said, sort of falls apart at the end. The head vampire chick is like 700 years old and brags about how she is the shit and all. However, she makes a bunch of rookie mistakes that end up getting her killed. Ends sort of on a, "well, that ended up being pretty easy," which was kinda weak.

Gotta give the MVP to the three kids. They are pretty perfect and totally great as buds. Really fun movie that henges on their roles. Even though the ending is weak, they always shine.