The Hunt is the okayest movie of all time 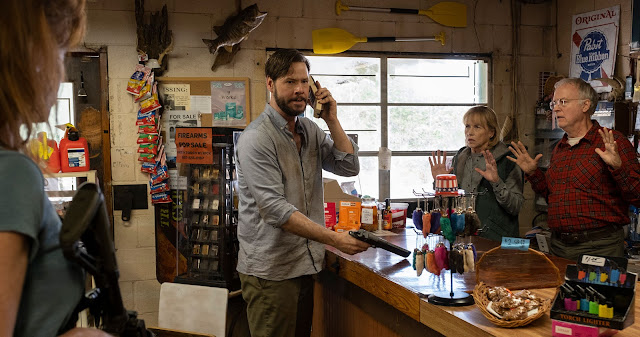 The Hunt. "Globalist elite liberal cucks." This movie. Blumhouse flick. Extremely polarizing. Political satires do that. I thought it was fun but problematic. Controversial, supposedly. I get it, for sure. A lot of people saying it wasn't worth all that drama. Probably right. I mean, it was just a movie that no one was going to see that didn't really say a whole lot. Like The Joker but not exactly going to get a standing O at Cannes. I think it was supposed to offend pretty much everyone, but I suspect it gets Trump supporters more accurately than the "liberal elite." It is sort of lopsided. As a liberal, I don't identify with anyone. Maybe the main chick, but not really. For the right-wingers, there is probably a stereotype for you.

Rotten Tomato Consensus: The Hunt is successful enough as a darkly humorous action thriller, but it shoots wide of the mark when it aims for timely social satire.

It's alright. Love the main girl. Betty Gilpin from GLOW. Not crazy about the MAGA agenda. Gist of the movie is that twelve mostly "deplorables," self-identifying, wake up in a field and are hunted by liberal elites for being terrible. These are the type of people that kill endangered species and throw around words like "cuck" and "snowflake." This hunt was sort of a Pizzagate type of myth in conservative talk cirlces. People were getting shit for it like liberals do when jokes are made so they figure, if we are going to lose our jobs and what not for this joke, let's do it for real. Whatever. It's dumb. Also, this is basically how Trump supporters see themselves: persecuted by liberals for their racism and cruelty. Fuck off.

Most of the people are easily dealt with. They are all real dumb. Not Gilpin though. She is basically The Bride from Kill Bill. Like Kill Bill, the action is pretty sick. I'm usually not a big fan, but I love the close-quarter, hand-to-hand shit that this Gilpin chick and the heavy, played by Hilary Swank, do so well. Their final blowout is indeed amazing. Top three chick-on-chick fight scene, for reals.

Bone I have to pick is that there is a pig and it dies. Have to watch it used as bate and get shot. Too sensitive for animal shit. Favorite scene though was when everything that goes down in the convenient store. This is shit is cray and not going to spoil it. When they find out where they are is also pretty fun. Plus, you know, the fighting.

People I recognize are many.  Ike Barinholtz who is the dumb guy in everything who is probably most known for The Mindy Project (I like this guy), Macon Blair from Green Room and Murder Party which are both solid AF, Dennis from It's Always Sunny,  Justin Hartley from that show I don't watch This is Us (he is the drunk one, so I'm told), Amy Madigan who was the mom in Field of Dreams, Emma Roberts from American Horror Story and Scream Queens, the singer Sturgill Simpson who is really having a moment right now (see The Dead Don't Die), and a much thinner Ethan Suplee who was the fat guy in Varsity Blues among other things whom I was happy for but then realized he is a Scientologist so fuck him.

No way that Gilpin doesn't win the movie. This probably launches her into stardom. But maybe not considering COVID-19 is tanking everything and probably ruining box office numbers/careers that aren't super established.