Gosford Park is the greatest movie of all time 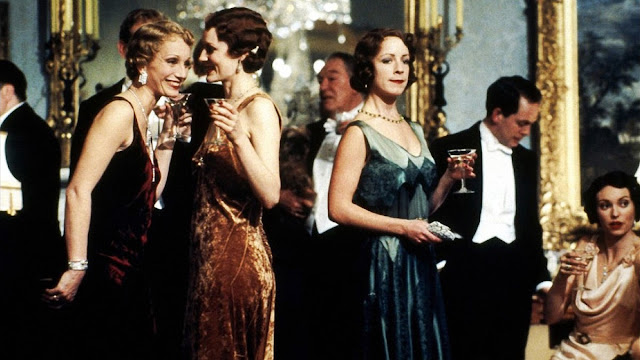 Gosford Park. If there's one thing I don't look for in a maid, it's discretion. Except with my own secrets, of course. What gift do you think a good servant has that separates them from the others? It's the gift of anticipation.

Been fixing to watch this movie for going on 20 years. Started it three times. Got confused. Gave up. Finally finished it this time. Love a good murder mystery. Wanted something like Knives Out. Yeah, sure, this was like Knives Out with 400% more people and 400% more confusion.

Gist of this is that a rich family and some socialites gather at the castle of this rich factory owner. They all have servants and there is a dichotomy between the classes. Everything that is happening above is also happening in the servants' quarters, just with less prestige. There is even a hierarchy based on who they work for which is a great little social commentary. You see, none of these rich people can do anything by themselves. Patriarch (played by Dumbledore) ends up dead. Everyone is sort of a suspect but the inspector is a complete idiot and lets everyone go. No just for Daddy Warbucks. Also, Professor McGonagall is also in the flick. They pretty much have the same relationship except slightly more tumultuous.

Directed by Robert Altman. Cast is pretty stellar. MVP was Helen Mirren, who is the head of the personal servants, but notably not the cooks. She is such an emotive star who has a lot going on. Close second for Clive Owen who is always damn cool.

Others you'll recognize are Stephen Fry, Ryan Phillippe who is this extremely rapey dickhead (no one likes him in either class, except for this rich bitch that he bones and the Hollywood producer guy [who played the President of NBC on Seinfeld] he is boning that brought him there), Tywin Lannister who is pretty much Tywin Lannister in this flick, that Richard E. Grant dude from Can You Ever Forgive Me? and Hudson Hawk, Emily Watson who was the blind chick in Red Dragon, and Kelly Macdonald (who I thought was Kate Winslet) who I guess was sort of the star. She's good. Reminds me of an ex I used to have. Everyone else basically looks like a rich person from 1930s England. 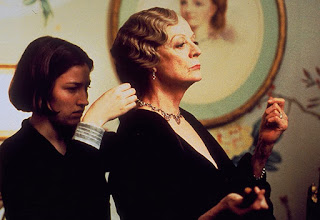 Issue I've got. Also, spoiler. Owen's character grows up in an orphanage. His dad was Dumbledore whom he is there to kill. Says his mom is dead and dad abandoned him. Has a picture of his ma that he takes with him everywhere. His mom is not dead, it turns out. She is fucking there, it's Helen Mirren, who poisons Dumbledore before dude gets a chance to kill him. Cops are sort of like, well it's weird that he was poison and stabbed. Oh, well. We are terrble at this. That is not what I took issue with though. It's that he has a younger picture of a highly visible woman that all these people know and see like all the time and he shows this photo to everyone. No one recognizes Helen Mirren? She looks under 50. I'm pretty fucking sure someone is going to be like, "hey, that looks like that bossy bitch who tells us who the fuck is what." But no one does. Could have reconnected with your moms, bro. But she cray.

So yeah. How was the flick in general? Greatest movie of all time, sure. Again, love a murder mystery, especially a period one. Especially of the Agatha Christie variety (fucking love that shit). But worth the 19-year wait? Nah. Also, the rich men go out and just shoot a bunch of probably now extinct birds. Great going, guys. I hope they all lose their fortunes in the war then get poisoned and stabbed post-mortem.