Fido is the greatest movie of all time 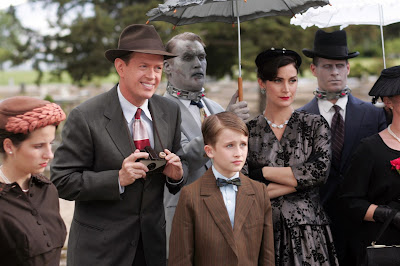 Fido. I'd say I'm a pretty darn good father. My father tried to eat me, I don't remember trying to eat Timmy... I knew you wouldn't eat me, boy! Expected this movie to be terrible. Pretty, pretty, pretty good. Think Lassie, except if Lassie were a zombie. Had to be the pitch for this. "Go get help, boy!" as his bullies turned zombies reanimate while he is tied up. "Is Timmy in trouble boy?" his mom asks when Fido gets to the house. Shit is genius.

Rotten Tomato Consensus: Making the most of its thin premise, Fido is an occasionally touching satire that provides big laughs and enough blood and guts to please gorehounds.

Gist of the movie is radiation turns all the dead people into zombies. Seems to be in the same universe as Night of the Living Dead. Show clips from it in news reels. Seen that flick probably in the 10-15 time range. I know footage of that when I see it. Everything else is 1950s Americana. Anyway, in this universe they have figured out a way to control zombies via a shock collar that also has mind-control capabilities. Now, the zombies are more or less slaves, doing menial labor. Some of them are also kept pets that do house chores... Some people even bone them. Which was pretty gross and sad. Then sort of touching. But then you realize that they are pretty dumb and definitely in this against their will. So there is that, which I don't recommend dwelling on, as I am, obviously.

BUT! A suprisingly moving and touching movie. Lot of pain, these people are carrying. Might be the whole being locked down and what not. But I feel your pain, movie people.

The kid who plays Timmy, as in Timmy and Lassie, is some kid I've never seen named Kesun Loder. Things haven't gone well for him since this movie came out. He also now goes by K’Sun Ray, which is dubious, at best.

His mom is played by Carrie-Anne Moss, whom I'm extremely attracted to, especially in Momento. Meow. Fido is played by one Billy Connolly. I think I recognize him from the Hobbitt movies, but I'm not sure. Other people you'd know are Dylan Baker who always seems to play a child molester or a bitch, Henry Czerny (total that guy), and Tim Blake Nelson. TBN is always great. He's the "Gofer Everet" guy from Oh Brother Where Art Thou? He is the guy having sex with a young zombie who died of a brain aneurysm. Jesus, man. But luckily this behavior is pretty much seen as socially unacceptable, and not that widespread. Though there was a moment I thought CAM was maybe going to ride Fido, which doesn't happen, thankfully.

Winning the movie is the guy who plays Fido. That guy has to be perfect for this to work. Emotive AF while also making you think he would probably eat another boy's face off. No universe does he not win this shit.