Ma is the okayest movie of all time 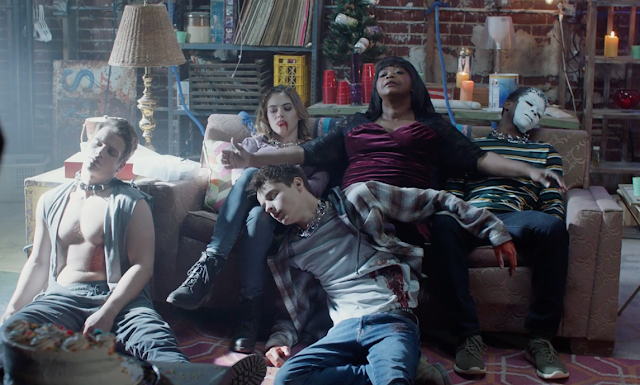 Ma. More like meh. "There's something off about Ma." "That bitch is crazy." That she is. Personal favorite quote is "There can only be one of us," Ma says whilst painting the black dude's face white. This movie was really not the best.

A movie about kids that "hey miss" a lady, she buys them booze, has them over to her house, and plots to murder them all in this act of revenge that is out there and completely implausible. Not really going to poke a bunch of plot holes in this. Just, like, what was she going to do if they never stopped her outside of the liquor store? I guess this was sort of a crime of opportunity, but this bitch was fucking ready for this shit. Don't really need for this shit to be possible, I guess, but it just adds to the overall, well-I-guess-this-is-happening vibe of the movie.

Speaking of, there were about five times in the movie where I had to back up and be all, what the fuck is happening? Where are they? Juliet Lewis is just going to sleep on this shit? Wait, they went back Ma's house? What is happening? Why the dog's blood? So forth.

Bunch of people I sort of recognize and kids I don't. Crazy ass Ma is that Octavia Spencer chick from The Help. Juliet Lewis playing the shitty mom of the main girl. That Luke Evans dude from The Hobbitt movies who I always think is another dude from Game of Thrones. Missi Pyle who is a total "that chick" whom I always think of as the sexy alien from Galaxy Quest. Kids I may have seen but no idea. Also, Kenyon grad Allison Janney, for some reason.

Lot of ignoring red flags in this one. I was once a kid who wound up in a situation like this. I would have more been like an extra in one of Ma's big parties near the end for this comparison. It went down like this. I was a freshman or sophomore in high school. Dude I was buddies with who I was actually distancing myself from who was headed down a bad path (not really a friend you call when going through a rough patch, in case you couldn't tell) talked me into going to a party. He drove. This was pre-driving days for me. I get there and it was a bunch of kids (dudes, almost exclusively) I either didn't know or didn't care for and like one obviously 50-year-old man who was claiming 28. Everyone was fucked out of their minds except me. Yeah, got a bad feeling and demanded someone take me home. Got called a bitch or what have you, but I was not fucking around. Have a hard-fast rule about immediately leaving a fucked up situation on foreign land, if you know what I mean. Well, don't talk to any of these people for like a month when dude I was originally buds with shows up for the old surprise visit with 50-year-old dude. My parents were not around and I had enough sense to not let this dude in my house. It was awkward as shit but fuck that, main, and fuck you for bringing this creep here. More time passes. Bud calls me up for my now monthly disinterested call. Tells me that that dude was drugging the guys he was bringing over, molesting them, and was indeed 50-years-old. Cops want to talk to everyone. You aren't telling me anything I don't already know and also we are not friends anymore. This is what was going through my mind the whole fucking time I watched this meh fucking movie. Hey, I wonder whatever happened to that guy.

Anyway, on to more out-there shit. So I don't want to sound super insensitive, but I am about to be super insensitive. The shit that Ma can't get over, she gives a dude a blow jay in a closet at school with her whole class waiting outside, isn't really that bad. I mean, yeah, these people fucking suck. That shit would not have gone over well at my high school, bullying was completely socially unacceptable, but this isn't the type of shit where you plot to kill everyone in your graduating class's children 30 years down the line.

Winning the movie was that Evans guy. He was way too good for this flick. His performance was really strange in that he was so solid in a movie that so wasn't. Basically, didn't call for all that. Don't waste your effort, my man. Plus, dude almost get's his man cut off. Instead, Ma pumps him full of dog blood, as mentioned, and slits his wrist. Lot of weirdness in this one.