Elvira: Mistress of the Dark is the greatest movie of all time 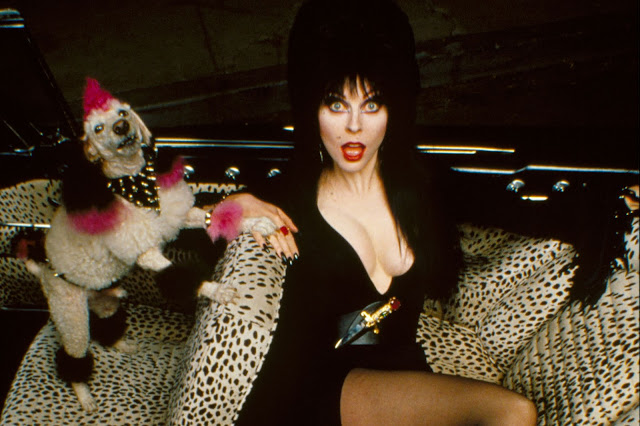 Elvira: Mistress of the Dark. How's your head? I haven't had any complaints yet... If they ever ask about me, tell them I was more than just a great set of boobs. I was also an incredible pair of legs. Not going to win any awards but it was a lot of fun. A lot of talking around Elvira's breasts, which are stunning. Witty one-liners a plenty with some semblance of a plot. That'll do. Greatest movie of all time.

Gist is that Elvira inherits her aunt's dilapidated mansion in an uptight New England town. The treasure, however, is her book of "recipes" which consist of spells. You see, her aunt was a witch and her surviving uncle, who wanted the book for himself, a necromancer of some persuasion, tries to steal the book and kill Elvira. That is the gist but the flick is mostly humor that comes out of Elvira being an outrageously groovy chick in the repressed town that was probably a lot like the one in Footloose. Also, dudes are basically constantly trying to rape her.

In addition to the lovely Cassandra Peterson (still gorgeous as a senior citizen) as Elvira, more on her later, there are actually some actors I recognize. Some include Edie McClurg (she was a high school student in Carrie and was the one who called Ferris Bueller a "righteous dude" in Ferris Bueller's Day Off) plays one Chastity Pariah, the guy who played Kenickie in Grease (his name was Jeff Conaway), Frank Collison who I think of as the "she r-u-n-n o-f-t" guy in Oh, Brother Where Art Thou and the guy obsessed with hotdogs in The Happening, William Morgan Sheppard who is such a that guy, Kurt Fuller who always plays someone who is super punchable, and Dick Miller, he was the guy that knew what gremlins were in Gremlins, is in a movie that Elvira watches at some point.

I am sort of in love with Elvira/Peterson here. Doing half-assed internet research I saw that an unknown Brad Pitt auditioned for one of the teenage boy roles. Peterson thought he was way too hot and felt that Elvira would not be interested in Bob if Pitt was one of the teenagers trying to get her. On her casting notes of his audition, she wrote next to his name, "Yum Yum!" She is a different breed, this one. Into horror, has a cool-ass dog, gorgeous, funny, lovely assets, you get the idea. A lot like my female companion, now that I think about it. Two things cemented it for me though. The first was her dance at the end, which is just indescribable. Then, whilst reading her Wikipedia page, I saw that she is a vegetarian who appeared in a humorous Halloween-themed ad for PETA. Right on, girl. Also saw that she was scalded on over 35% of her body in a kitchen accident when she was little. She said that her Elvira costume "showed only the good bits" but there isn't much you don't see in the movie. Anyway, totally wins the movie and life.