Chopping Mall is the worst movie of all time 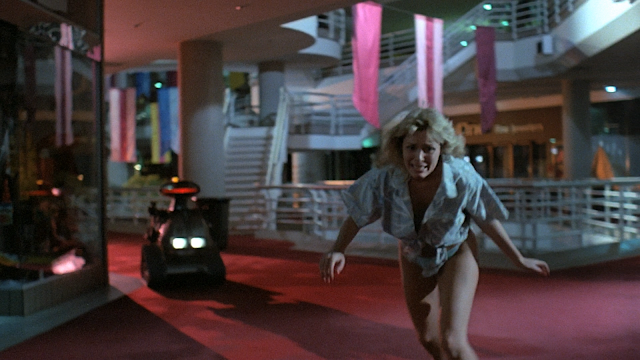 Chopping Mall. Let's send these fuckers a Rambo-gram. It is bad. Also, it is very bad. Not a single chop was made in this film. Was pretty sure they came up with the name of the movie, which is amazing, and then built a film around it. That, however, was not the case. Laser Mall or Fire-Extinguisher Throwing Robots Mall doesn't have the same ring to it. But yeah, worst movie of all time. 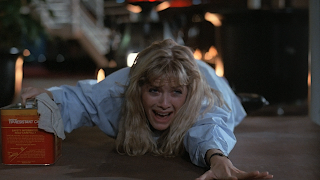 Gist of the movie is a shopping mall installs a trio of robots to police the mall at night, killing anyone that isn't an employee that is there over night. But them shits malfunction and then just kill anyone in the mall. Alright to kill anyone breaks in in this universe. Killing employees of the mall that are there to bone in a furniture store, that shit is fucked up and wrong though. Instead of smoking cigarettes and drinking, though, post-coital activities for these kids includes shooting at robots trying to kill them and dying. The robots malfunction after the building gets struck by the infamous blue lightning, ever present in the 1980s, which gets featured a lot in electrocution scenes in this flick. 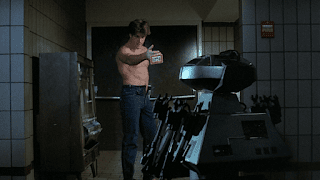 Directed by one Jim Wynorski, a guy out of the Roger Corman school of film making, has over 150 titles to his name. Kelli Maroney, who plays the part of Alison, and Tony O'Dell, as Ferdy, are the survivors who are notably the only pair of "teens" that don't get it on. O'Dell is one of the Cobra Kai punks in The Karate Kid and is also in the YouTube spinoff Cobra Kai. You may recognize Maroney from Fast Times at Ridgemont High or as one of the leads in dope 80s horror flick Night of the Comet which I'm going to have to rewatch. Director Wynorski claims to have cast her because he wanted to date her. That is one way to do it, I guess. Get a Dick Miller cameo. He was the guy that knew what gremlins were in the movie Gremlins. There are a couple attractive ladies in the film who have a little bit of gratuitous nudity but the only one I recognized was Barbara Crampton who is horror royalty in my book. She was the lead chick in Re-Animator and Castle Freak and more recently was in You're Next. She is great and very beautiful but was pretty annoying in this flick. She completely gets herself killed in a grossly unnecessary way. Her and the other girls are on their way out of the mall via the air duct but she keeps saying shit like, "my boyfriend needs me, I have to go help him!" She tries and immediately gets herself killed although the dudes have the situation sort of in hand at that point. 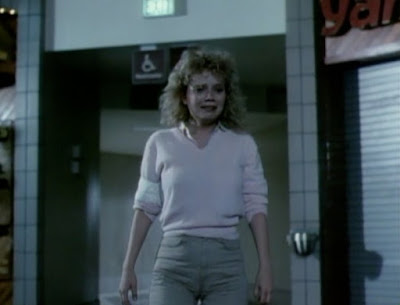 There is this raging asshole who is boning the mall owner's daughter who I thought was funny as a character. This was the guy with the mullet played by one John Terlesky. Oh he is over-the-top unlikable and offensive. You don't mind when he gets killed after going out to get the lady he just boned smokes out of an old fashioned cigarette machine. He has a super solid one-liner to the robots when they ask for his badge which is what I think set them off to rampage. When he shows them his badge he tells it "Klaatu barada nikto" which was the phrase used to stop Gort, the robot in the 1951 film The Day the Earth Stood Still, from destroying the world. It was also the line that Bruce Campbell flubs when he picks up the Book of the Dead in Army of Darkness which I am sure is also a reference to the Cold War-era film. This guy's girl's death is pretty solid, too. She gets shot with a laser and her head explodes. Always solid.

With a brief 77 minute run time, I still felt they could have tightened this movie up. Not a great sign. Also, nothing with the killer robots really makes sense. Deploying killer robots to work security at the mall, what could happen, am I right? Pity, that this movie isn't more watchable with a cast that includes Crampton and Maroney. Maroney, I guess, wins the movie though there really aren't what you would call winners here. She also has the worst camel toe I have ever seen in khakis of all things. It is fucking crazy. Googling that I see there was a How Did This Get Made? where this phenomenon in the movie was discussed. Will need to give that a whirl.