The Shining is the greatest movie of all time 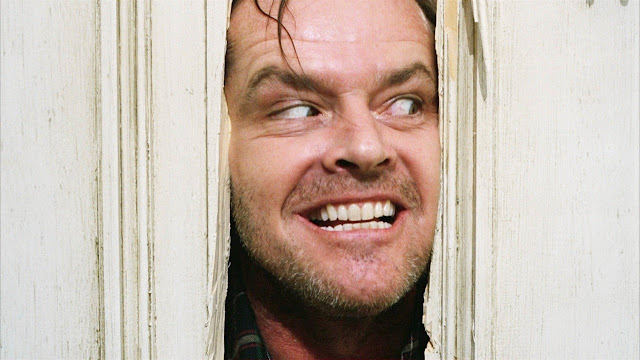 The Shining. Wendy. Darling. Light of my life. I'm not going to hurt you. You didn't let me finish my sentence. I said I'm not gonna hurt ya. I'm just going to bash your brains in! I'm going to bash 'em right the fuck in. Stanley fucking Kubrick. Maybe a top five most watched movie for me. First saw it when I was way too young. Like it a little less than I did the last time I watched it... But I finally read the book a few years back and see this film differently now. In the novel we get this super complex character in Jack with whole character arch. We also get a character that Stephen King was personally connected to with the same demons as he had. In the movie we get a raging fucking asshole who basically is just Jack Nicholson who becomes a full on maniac. Nicholson on coke, presumably. No real development nor any personal attachment. Still the greatest movie of all time though.

Rotten Tomato Consensus: Though it deviates from Stephen King's novel, Stanley Kubrick's The Shining is a chilling, often baroque journey into madness -- exemplified by an unforgettable turn from Jack Nicholson. 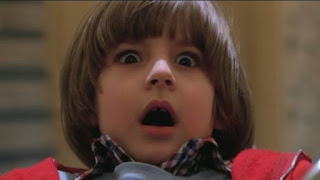 Should know all this shit and the people in this by now, but in case, here goes. Gist of the movie is a dude gets a job as the winter caretaker of the Overlook Hotel, taking his son and wife with him to this isolated location. Once they get snowed in, the ghosts come out (they want the boy who has a psychic gift him that the hotel's head chef calls "shine"), fuck with his head, convince him to kill them. He loses his fucking mind. Shit gets cray.

Directed by Stanley Kubrick, legendary director. Jack Nicholson, yeah, that guy, plays Jack Torrance. There are a few shots where it seems like a Kubric film. But more than that it feels like a Jack Nicholson movie. Nicholson definitely wins the movie, by the way. Total fucking psycho. Goes from being a prick to everyone to being a complete psycho. Also staring in the flick are Shelley Duvall plays Wendy Torrance, Danny Lloyd as Danny (his sweater game is on fucking point) and does a hell of a job for a very young child actor who thought he was in a family drama, and Scatman Crothers (mostly remember him from this, Twilight Zone: The Movie, and as the coach of the Harlem Globetrotters on various TV shows) plays Dick Hallorann, the psychic chef. Few other people in the movie but no one you are likely to recognize. Most notable are Philip Stone as Delbert Grady, Joe Turkel as Lloyd, and hottie Lia Beldam as the young woman in the tub in room 237 who makes out with Jack. 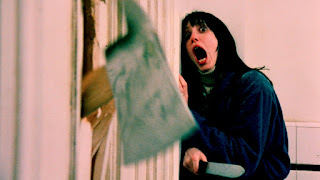 As I said before, me and this movie go way back. Used to watch it yearly, it felt like it was always on TV, but it has been more like every five years for the last 15 years or so. Still, every time I notice something new. Tis' how it is with Kubrick movies I guess. In this viewing, picked up on a bit of comedy I'd never noticed before. It comes when Jack is in the ballroom and Grady bumps into him and spills some custardy, thick, yellow beverage all over Jack's hands and jacket. Grady convinces Jack to go to the restroom with him to wash off. "It tends to stain," Grady says. It is then that Jack pats Grady on the back and leaves a hand print. Pretty sure he did this on purpose.

Also picked up something Jack says early in the movie. He tells Wendy that he "felt like he had been there before." Of course at the end we see him in the July 4th Ball photo from 1921. Hard to say if we are to take this literally or not. Hard to say what the fuck Kubric was ever thinking. Shit, I mean, he once called The Shining his most optimistic movie because it showed some sort of afterlife. Alright, buddy.

Think part of my affinity for this flick when I was young came from my mother being the spitting image of Shelley Duvall in this movie. It was crazy, though they have since adopted vastly different looks. Also, she was a a super fun mom, always playing with her little guy, just like my ma when I was a wee one. Aw. I love my mom. Wendy is a super sympathetic character as well. Husband is a major asshole but she is stuck there with him, eventually realizing that he is insane. I mean, the day before everything goes to shit, she just thinks her husband is an asshole, which is sort of crazy to think about. The next day she is beating him down the stairs with a baseball bat and then dragging him to the dry goods storage room, hoping to lock him in before he wakes up. Something else I noticed this time around, Wendy did all of Jack's work. She was the true caretaker, ironically, keeping the place that is trying to kill her and her boy from burning to the ground. She is the only one that gets anything done, the true hero of the movie.

So that, is The Shining, I guess. Something else I get now that I am older is Jack's freaking out after being interrupted while writing. That is exactly how I feel at work like 75% of the day. I bring this up as my female companion tells me that the trash is full and that I need to deal with it. Bebe. Darling. Light of my life...