Death Proof is the greatest movie of all time

Rotten Consensus: Death Proof may feel somewhat minor in the context of Tarantino's larger filmography, but on its own merits, it packs just enough of a wallop to deliver sufficiently high-octane grindhouse goods. 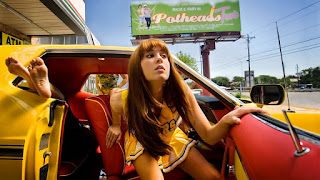 With Robert Rodriguez’s Planet Terror, which was also solid and probably a movie I'm going to rewatch soonish, was part of the "Grindhouse" double feature. This confused the few people in the theater where I originally saw the pair. Supposed to recreate the experience he loved as a child of going to exploitation double features. Tarantino's portion follows Stuntman Mike played by Kurt Russell who gets off by killing young women by crashing into them with his stuntman, death proofed car. But first he likes to fuck with them.

The movie is split into two halves. The first set, whom he meets at a bar in Austin, Texas, he hits head-on, crushing one, ejecting another from the car, ripping off one's leg, and running over the other one's face. This is after he has killed a woman played by Rose McGowan whom he is "giving a ride home" by pinballing her around in the non-death proofed side of the vehicle. It is probably the most terrifying moment in any of Tarantino's movies when McGowan's character, after ignoring many red flags and is in the stuntman's car, when he asks which way she is going and she says "right" and Stuntman Mike explains that they are going "left" and if she had been going left too, it would have been a while before she had gotten scared. The girls in this section consist of pretty lady Vanessa Ferlito whom I've never seen in anything else before or since, Jordan Ladd who is the daughter of Charlie's Angels star Cheryl Ladd, and Sydney Tamiia Poitier who is the daughter of Academy Award winner Sidney Poitier. This was sort of the second movie, the first being Jackie Brown, where Tarantino started using the children of stars he admired but the first that he really started to go all in on it (he has since done this again with Once Upon a Time in... Hollywood). This portion of the movie also features Michael Parks who became sort of a Tarantino and Kevin Smith favorite late in life (he played the villain in both Red State and Tusk), Eli Roth who plays a frat boy type, and Tarantino playing the bartender. 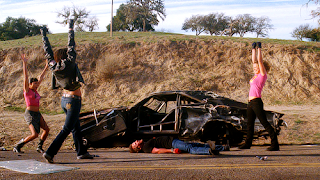 Second part of the flick, spoilers, Stuntman Mike tries something similar, trying to run a group of women off the road, one of whom, stuntwoman Zoë Bell, Uma's Kill Bill stuntwoman, playing herself, has strapped herself to the hood of a car in some dangerous as fuck thrill seeking shit. Unfortunately for Stuntman Mike, the women he has decided to fuck with include a legendary stuntwoman (Bell), a fictional stunt driver played by one Tracie Thoms whom I don't know, and pissed off hair and makeup person played by Rosario Dawson who wears shit-kicking boots and throws a hell of a punch. After Bell is finally thrown from the front of the car, Stuntman Mike tells them that "that was fun" but he doesn't get to enjoy the moment as Thoms breaks out a gun, wounding him with a shot to the arm, and then the ladies go on the offensive, eventually running him off the road, pulling him from the car and beating him to death. This was Tarantino's chick/car movie, obviously. 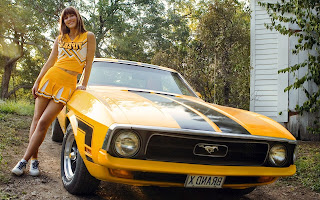 Couple of things that stuck out. Tarantino and the feet thing. There are multiple scenes featuring woman's feet, per usual. Feel this is the first one where it is like a real joke, notably when Dawson's character is sleeping with an eye mask on in her friend's car with her feet out the window and Stuntman Mike comes up to her and is a huge disgusting creep. Sort of Tarantino being like, "you think I am creep with the feet stuff? Here is some real creepy shit." There is a lap dance scene where one of the girls that dies in the car crash. This is pretty unnecessary and just sort of weird. You definitely don't like it when you see what this asshole does to her sort of thing. Finally, has one of funniest scenes from any of Tarantino's movies. The girls in the second part are trying to test drive this classic car they are into owned by some hillbilly (whom I remember as the lazy eyed dude in a couple Adam Sandler movies). As collateral on the car, they leave this actress/model dressed as a cheerleader played by Mary Elizabeth Winstead (she is extremely attractive) they are hanging out with. They imply that she will suck the guy's dick, unbeknownst to her. The guy asks Dawson's character how he knows her. "She is an actress," she says. "From porno movies?" he asks. "Yes, from porno movies," Dawson says. Funny shit but it gets scary as they take off and he walks up to the girl with a disturbing grin on his face. "Gulp," the cheerleader says.

Hard to say who won the movie, really, but I'd probably go with Russell. He plays a pretty convincing maniac, and without this role, I don't think we get The Hateful Eight and possibly not Once Upon a Time in... Hollywood (it is rumored that the Russell and his longtime stuntman were maybe the inspiration for the movie [or maybe Burt Reynolds and his stunt guy]). A case could also be made for Bell who went from stunt person to legitimate actress after this flick. Also, the minute or so that Parks is in the movie is an incredible heat check. That guy always made the most out of his 30 seconds or whatever of screen time.