The Blair Witch Project is the greatest movie of all time

The Blair Witch Project.  "I just want to apologize to Mike's mom, Josh's mom, and my mom. And I'm sorry to everyone. I was very naive. I am so so sorry for everything that has happened. Because in spite of what Mike says now, it is my fault." Anyone who doesn't like this movie got bamboozled when it came out. Another horror movie from my Greatest Years in Cinema Project. This one form 1999. The first time I saw this movie, before my junior year of high school,  was at the drive-in. I was at the concession though and missed the first few minutes. I missed the bit about Rustin Parr, the hermit who kidnapped and murdered a bunch of kids in the 1940s on the orders of the witch, stealing two at a time and making one stand facing the corner while he killed the other one. Sooooo, at the end when Mike is in the corner it didn't carry the impact intended as I thought he was taking a piss or something. I thought the movie was fucking dumb as shit because of this. When it came out on video I rewatched, forgetting all about that, just remembering I hated it and it was stupid. Oh, I thought, that shit is scary AF, actually. Greatest found footage movie of all time. 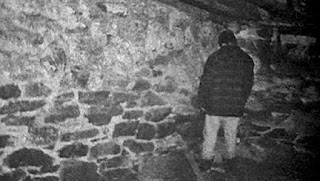 Rotten Tomato Consensus: Full of creepy campfire scares, mock-doc The Blair Witch Project keeps audiences in the dark about its titular villain -- thus proving that imagination can be as scary as anything onscreen.

Gist is that three film student who disappeared after filming a documentary in the woods of Maryland about the Blair Witch legend have their footage show up and shows a bunch of creepy shit. This is that footage. 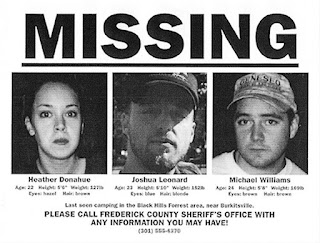 More or less just three people in this with a few extras. The three we care about are Heather played by Heather Donahue, Josh played by Joshua Leonard, and Mike played by Michael C. Williams. Josh pops up every once in a while but Heather and Mike not so much, which is unfortunate since they were pretty solid, in my opinion, and since they didn't make shit and couldn't really capitalize on the success of the movie. A lot of why they could was because of the viral marketing campaign that said these were real kids that died. People ate that shit up, this was the early days of the internet and people believed everything. They still do I guess. Bursting that bubble though was when Donahue showed up in the Steak 'n Shake commercials. But some people still believed. Probably Trump supporters now. Donahue was also in maybe the worst movie I've ever seen, Boys and Girls. My girlfriend at the time made me go see this piece of trash. When middle school girls were walking out of it and shit, I thought about breaking up with her for making me stay. I never forgave her for this experience.

I remember there was this "documentary" that came out the summer of 1999 that aired on the SciFi Channel in 1999 called Curse of the Blair Witch that detailed the legend and was maybe as cool as the movie. In it we learn that the witch, one Elly Kedward, was this woman blamed for these child disappearances in the late 1700s. The towns folk ultimately sentenced her to death by exposure and banished her to the woods. Her body was never found. Then we get the guy from the 1940s, Rustin Parr. That shit was hot. Honestly, that whole legend shit and the marketing around it was the best part about it. I mean, total bullshit but cool. That is the MVP of the movie for me.

20 years later for my third viewing, shit holds up. Lot better than that Blair Witch trash from a few years back. Real disappointed by that turd. Loved two of the director's, one Adam Wingard, other movies. You're Next and The Guest but have pretty much hated everything since that. You're Next though is one of my favorite horror movies of the last decade. Up there with Get Out and shit. Then there was the sequel to BWP called Book of Shadows: Blair Witch 2 which I like a lot but was extremely poorly received. It stared Jeffrey Donovan from Burn Notice and Shut Eye both shows I was somewhat into and Kim Director whom I found extremely attractive. Will have to rewatch that one as well to see if it holds up. Will get back to you on if it does.