Carrie is the greatest movie of all time 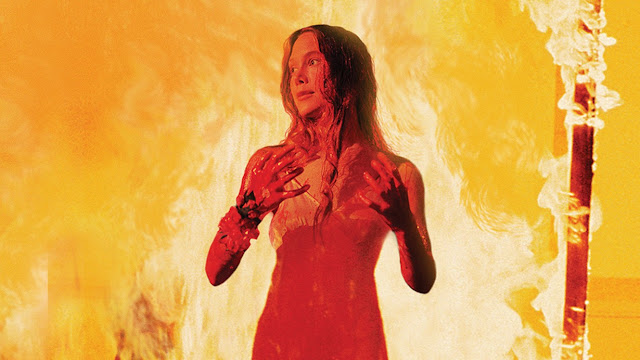 Carrie. These are godless times. Indeed. Finally getting back to one of my Greatest Years in Cinema flicks. First film from 1976. Skipping ahead to the horror movies since it's close to Halloween and all. Watch a shit ton of horror this month, obviously. It's been well over 20 years since I've seen this particular flick. Talking junior high days. This is what I thought high school would be like. Girls having their first periods. Not knowing what it was. Getting ridiculed mercilessly. Going to prom. Winning prom queen. Having pig blood dumped on them. Raging out and killing everyone with your telekinetic powers. You know, normal stuff. On rewatch, holy shit-balls, this was a great movie.

Rotten Tomato Consensus: Carrie is a horrifying look at supernatural powers, high school cruelty, and teen angst -- and it brings us one of the most memorable and disturbing prom scenes in history.

I pretty much set up everything you need to know about the movie already other than it is based on a Stephen King novel (which you probably know) and was directed by Brian De Palma. But her is some extra: Carrie White's mother is a religious nut job and blames the period on her sinning instead of biology. Because of her upbringing, she is bullied constantly. She does have an advocate at the school, the gym teacher played by Betty Buckley, who is smoking hot. She is basically the same age as all the actresses playing high school chicks but they pass for high school while Buckley is a woman. She is old now, of course, and has sort of become my surrogate grandmother in film, but she is still attractive for an old lady. She is the chick from Split, the psychiatrist that treats people with multiple personalities. I like her. So does Carrie. Just want to hug her. 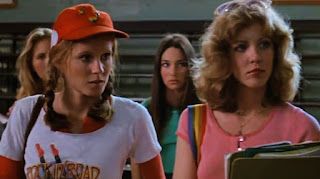 A whole bunch of other pretty ladies in this flick as well. Not only do you have Nancy Allen from other De Palma movies Blow Out and Dressed to Kill (my second/sometimes favorite of his)--who is just really something, though she doesn't really do it for me in this, probably because she is such a bitch--and P.J. Soles (the ditsy blonde from the original Halloween), you also have all these randoms in the standard De Palma gratuitous shower scene. Noice.

Unfortunately that leads to all the shit that goes down as Carrie, played by the Sissy Spacek, has her first period, which she knows nothing about, and loses her goddamned mind. All the girls in her class mock the fuck out of her as she screams like she is dying. The girls get in trouble from good old gym teacher Buckley and have to miss prom, which they take out on Carrie, and meanwhile telekinetic Carrie is traumatized as shit. The teacher then sends her to the principal, this idiot, who is like, "uh, hey, Cassie... uh, Wright, would you feel more comfortable if I shook you (which is his only move when it comes to 'consoling')? Ah, uh, go home, I guess, Corrie Night... Congratulations!" 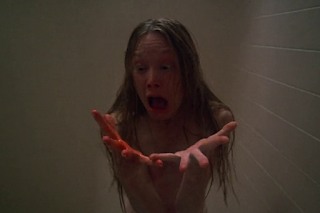 So she goes home and is like, "you should have, you know, given me a fucking heads up about this shit and whatever," except Christian like. And her fucking crazy-ass mom, played by Piper Laurie from Twin Peaks is like, "You have sinned! Eve was weak! And the Lord visited Eve with the curse, and the curse was the curse of the Christ's blood! Oh, Lord, help this sinning woman see the sin of her days and ways, show her that if she had remained sinless, this curse of the Christ's blood would never have come down on her!" So I guess old Marge here thought that her daughter could pray her period away but was also born of sin because of Eve. The point here is that sex ed has failed Carrie White she really has no fucking chance. Meanwhile Nancy Allen blows Travolta whilst saying his name at the same time which takes some talent.

Good time as any to talk about what a fucking catheter in my dick Travolta's character is. Going to a slaughterhouse and killing a pig with a sledgehammer like a maniac. Fuck this sick fucking asshole. No way to get me to hate a character more than some shit like this. The chicks are fucking awful, too, of course, taking advantage of this chick who is clueless as fuck, for no reason really. She just doesn't want to be funny and sort of makes a friend in one of the girls who has her boyfriend take Carrie to prom. This is stupid and almost backfires as it seems he is trying to low-key fuck. But it doesn't ever get to that post prom party where everyone loses their virginity if they've still got it as the mean girls dump the dead pig's blood all over her and the bitches laugh like fucking idiots. This is when we get the fucking shit storm to end all shit storms and it is not limited to the ones that wronged her. Shit is burning the fuck down. Also, hell'a scary ending.

Spacek would normally win the movie. She goes from naive bumpkin to out of control banshee. De Palma is solid as hell, too. But King is the hands down winner here. This is the first of his 100+  movies based on his works. That shit is insane. This has to be near the top of them as most of them are indeed trash. But still. This was his first book. The one that got him on the map. This flick being fucking great catapulted him into rock star.  Finally, don't fuck with people for no reason or they will kill you with telekinesis. Remember that.