It Chapter Two is the greatest movie of all time 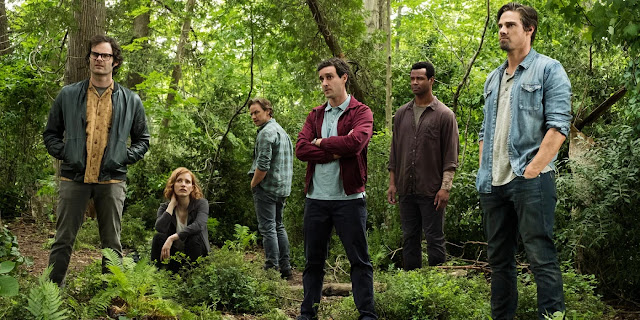 It Chapter Two. Just trying to add some levity to this shit. I’ll go fuck myself. Beep Beep Richie. Great flick. Really fucking loved it. Not quite an instant classic like It Chapter One but it's really fucking good. Also, not scary like the first one, though I jumped out of my seat like four times and there are moments. But super entertaining and really funny. Usually not a good sign but just roll with it and you'll have a good time. The ending, also, is just alright.

And to be fair, when I was pulling into the theater for the first one, the parking lot was more or less empty. Definitely no one walking around or anything. The way I came into the parking lot brought me up to the theater and I turned into a row of cars that faced the exit. When I did this, just sort of floating at me was a red balloon. It was fucking terrifying with no one obviously around and me going to that movie. I quickly parked, never seeing anyone around, and popped out my phone and took a picture as evidence (though by that time the balloon was sort of far away). Shit freaked me out and definitely fucked with me during the film, probably adding to my enjoyment of it. 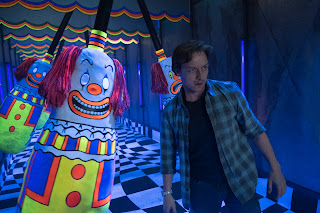 The gist most of us know. Follow up to It Chapter One from 2017. That film follows a bunch of kids (collectively known as the "Losers' Club") who in 1989 set out to a supernatural, murdering clown/demigod who feeds off the fear of children every 27 years in the town of Derry, Maine. This is the same shit, only now, in 2016, it's 27 years later and the kids are all grown up. Based on the dope ass 1986 novel by the Stephen King, this is considered one of his masterpieces.

Directed by one Andy Muschietti, who also directed Chapter One, the film stars Andy Bean who is sort of in the movie plays Stanley Uris, Jessica Chastain as Beverly, Bill Hader as Richie Tozier, James McAvoy as Bill Denbrough, Isaiah Mustafa as Mike Hanlon (which was also the name of my first newspaper editor and most significant influence when it comes to style), James Ransone as Eddie Kaspbrak, and Jay Ryan whom I've never seen before in my life plays Ben Hanscom, are the adult versions of the Losers'. All of these actors (except for I'd say Chastain, McAvoy, and sort of Hader) are spitting images of their younger counterparts. All of the them are also fucking great if some of them are under-utilized (Chastain and McAvoy sort of barely feel in the movie for long stretchs, for example). Bill Skarsgård reprises his role of Pennywise the Dancing Clown. He's still great as well as super creepy. And all the kids also returns to play their parts. 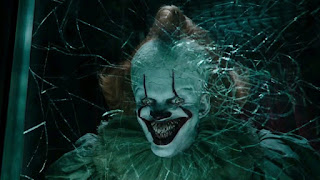 One big complaint is that they included the kids, honestly, who have obviously aged a couple of years, in the film. Other than one of them turning out to be sort of gay, none of the kid stuff really adds anything. Also, all of the violence is extremely off-putting. Don't like stuff happening to animals or kids in movies. Stuff, spoiler, happens to kids. It's hard to watch... But expected.

Hard to not to note some of the solid AF Easter eggs sprinkled throughout the film. A couple, like a high profile cameo, I'll leave to the viewer. A couple others are sort of harder to notice. Like the actor Brandon Crane who played 12-year old Ben Hanscom in the 1990 version of the film showing up in a boardroom of executives Skyping the new Ben who gets a call from Mike to come back to Derry. Then there are things that I am sure if they are Easter eggs or what. Like Peter Bogdanovich playing himself directing a Denbrough movie at the beginning. (Something weird about this that has little to do with the movie is that after I watched this I went to a used book store and went to the Director Biography section and found a book by Bogdanovich, one Who the Hell's In It. It totally felt meant for me. Then I opened it up and saw that it was signed by the author which was fucking awesome.) 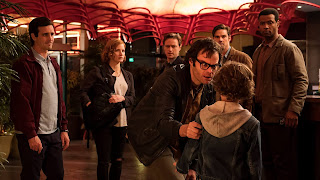 Winning the movie was Hader as Richie, as everyone basically agrees, but I thought a lot of that performance was lifted by Ransone as Eddie and their chemistry together. Just like Finn Wolfhard (who played young Richie) and Jack Dylan Grazer (the young Eddie) their comedic timing was impeccable and you really feel like they are homeys razzing each other. There is the stuff they say to each other. Like when Eddie is petrified with fear and Richie hypes him up by asking him who did all of these things that took extraordinary courage like taking a knife to the face, pulling that knife out, and stabbing the guy who stabbed him with it in the face. "Me," says Eddie. And "who married a woman ten times his own body mass?" "Me," sayeth Eddie. On that note, one of the biggest chuckles I got, sort of spoiler, was when Richie talks about boning Eddie's mom and then says that afterward she leaned down and whispered to him "Jabba amu intoe tah parena" or some such shit in his best Jabba du Hutt voice out of nowhere. They both get pretty good lines in reference to murdering bully Henry Bowers (played by one Teach Grant). More spoilers. Eddie, after he stabs Henry but doesn't kill him, tells him "You should cut that fucking mullet. It’s been like 30 years, man," which, yeah. This leads to what is easily my favorite line of the movie. After Richie kills Henry with a tomahawk to the back of the head in old Derry Public, he looks at Mike, whom he has just saved, and says "I guess you could say that was long overdue. Get it? ‘Cause we’re in a library." And then he pukes. Beep Beep Richie.