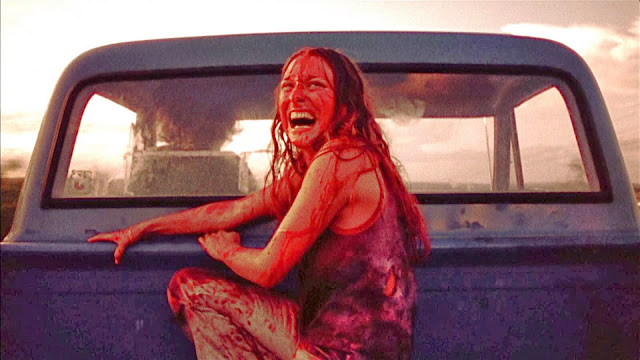 Texas Chainsaw Massacre. Classic. Wouldn't watch it as a child. Was fucking scared out of my mind from the little bits I had seen flipping through the channels or from the five second clip from the second movie in the series in The 'Burbs. Didn't see it until like junior year of high school at which point I thought it was a comedy in the way that The Evil Dead is sort of comedy albeit way more brutal. Also dark. The second flick in the series just goes completely camp, by the by. This is totes director Tobe Hooper's masterpiece. Completely changed the direction of horror and invented the concept of the final girl with original final girl Marilyn Burns. Greatest movie of all time. Probably legitimately.

Rotten Tomato Consensus: Thanks to a smart script and documentary-style camerawork, The Texas Chainsaw Massacre achieves start-to-finish suspense, making it a classic in low-budget exploitation cinema. 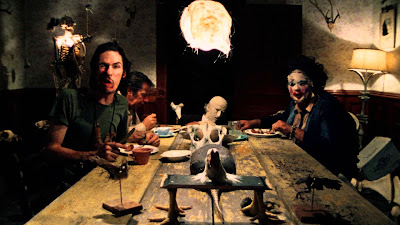 Group of five college aged kids, a brother, Franklin, and sister, Sally, and their friends, the other ones, are going to stay at their dead grandfather's place when they are attacked by a family of cannibals. The group's most memorable member, Leatherface, wears the flayed faces of people he kills like a grotesque Halloween mask and kills with both a sledgehammer and a chainsaw. After easily killing the other four, Leatherface chases Sally who puts up an impressive fight before she eventually gets captured and is forced to sit through an insane dinner where her friends are the entree that culminates in her attempted murder. When the group of cannibals--consisting of Leatherface, The Hitchhiker that we meet early in the film whom the college kids give a lift to before he attacks them, and The Cook who doesn't like killing but sure loves cooking and eating long pig--decide to let grandpa, who is 120 years old, perform the kill, Sally manages to wriggle free and get to the high where she makes her escape.

Directed by the ever misrepresented Hooper, who wins the movie for producing such an influential masterpiece of horror, this marks the early apex of the director who never earned the respect of Hollywood. He would later direct The Funhouse and Lifeforce which I have since grown to appreciate. All of these movies are out there. Surprising amount of humor in this one about a family of murdering cannibals that include one among them wearing human faces and what not. Not completely sure if this is intentional or not. The humor. 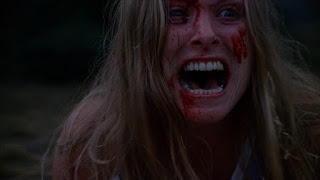 But here is some stuff I compiled that supports this being a comedy. At the beginning, just after an insane and terrifying voice over, Franklin, the character in the wheelchair, starts out the movie pissing in his pee can and then rolls down a hill, falling out of his chair screaming. It is close to Mac and Me bad. Then there is the Hitchhiker with the scar or birthmark on his face who they pick up. He jokes about working in a slaughterhouse and shows them pictures and stuff. Hilarious, right? He then starts talking about how the new, more humane method of killing livestock eliminates "good jobs" for people. This guy would freak out if he saw all the automation or walked into a Kroger with the whole self-checkout shit. This is all before he takes Franklin's pocketknife and starts cutting himself. Everyone freaks and Franklin takes the knife back. The Hitchhiker then pulls out a straight razor while everyone is screaming and slices Franklin's arm. All hell breaks loose and they boot him out of the car. It all goes south so fast that it ends up being like WTF funny. Then, once they stop and stumble upon the house where Leatherface and the rest of the killers reside but before anyone has died, Franklin spazzes out, saying stuff like "come on Franklin, it'll be a great time," and repeatedly blows raspberries and makes fart noises for an uncomfortable amount of time. 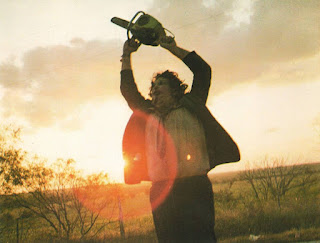 Plus, there is the scene where couple Kirk and Pam keep ignoring insane warning signs that they are in danger whilst dicking around out in front of the murder house where both of them will die. This includes finding human remains. Kirk finds a tooth, obviously human with a filling in it and shit, and like touches her with it to gross her out and is like "I got something for you" which is fucking insane. A minute later he goes inside and dies within 10 seconds as Leatherface busts out and smacks him in the head with sledgehammer. That shit ain't funny.

Then we get the stuff with Sally, played by actress Marilyn Burns, towards the end. First she is chased by Leatherface who is a first-time stoned Gunner Hanson. That is the reason for all the Keystone Cops swerving and shit. She eventually gets to this gas station that doesn't sell gas that they stopped at earlier. The old guy inside, whom we only get referred to as "The Cook", ends up being in on the killing and eating folks and attacks Sally, screaming hysterically, with a fucking broom and a burlap sack. Once they have Sally in the home, the group brings out grandpa to kill her with a hammer like he used to use on animals (not cool with that shit) but he is so old he can barely hold it. This allows her to break loose and hit the highway where we get the iconic Leatherface raging and twirling like a dervish.