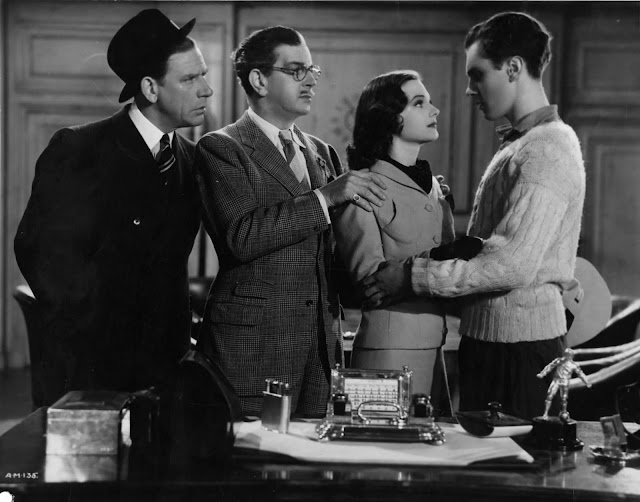 The Arsenal Stadium Mystery. Fourth movie I've watched for the Greatest Years in Cinema Project from 1939. First of the obligatory movies about sports from those great Hollywood years. This one, decidedly B, is not good. This is before they made sports movies worth a shit. The first one that is palatable is Pride of the Yankees in 1942 about Lou Gehrig starring Gary Cooper. This is like the crappy, lighter, British precursor that stars the real players from the club. Need I say more? For this reason, I was not expecting any sports movie from this year to be any good. So I figured I'd go with this movie over a couple of others because it had this whole murder mystery aspect to it. Fuck it. Why not.

An Arsenal Football Club movie, it is second English soccer talkie. Still figuring this whole thing out, I guess. Have to REALLY appreciate Arsenal to be a fan of the movie at this point. Like a historian or something. It basically follows the lead up to this big... game? Match? I'm sort of a fan of the Premier League going back to 2015 (mostly for pub trivia purposes) and was a fucking sportswriter and had to look that shit up every time I cover the damn thing that has been the sport of the future for my entire life, probably going back to win this movie was made. Again, huge fan. ANYway, the big MATCH is between Arsenal and this fictitious amateur team called the Trojans. Arsenal has absolutely nothing to gain from this and may indeed be playing against murderers as the best player on the Trojans suddenly dies during the MATCH. It's a brutal sport, after all. They stop the match and this Sherlock Holmes esque dude, more on him later, comes in to investigate. Suspension mostly falls on a couple of his sons of bitches teammates (one of which brings a fucking female ventriloquist dummy [which I assume is a crude sex toy] that is creepy as shit but brings the team luck or something), his Swedish GF, and side bitch (these relationships were all a bit hard to follow so I may be mistaken).

Ok. We'll start with this. The soccer is bad. I assumed this is what happened when you put old timey actors in sports roles but the Arsenal team was indeed made up of mostly real Arsenal players. Lionel Messi these guys are not. Move at different speed than players in the game today. Nor do they have the ball handling skills.

Something random of note I will point out. One of the chicks whose role was unintelligible but was most definitely a  suspect in the murder is being questioned all friendly like by the police and to be funny, I guess, she goes and puts Epsom salts in the sugar bowl. Hilarious and weird. What the hell is going on here? I have no idea. Ruins the tea which is equivalent to killing everyone in the room, apparently.

Fast forward to the end of the movie and it is pretty interesting and sort of insane. Wasn't really a fan until those last couple of minutes. When they find out who the murderer is, which they do through an elaborate setup that turns his hands black (don't ask), there is a really effective scene where the guy knows he's fucked and looks at all the tunnel exits. Like five or six cops stand in each one, looking at him with disgust. He then plays hero ball, taking it from coast-to-coast and scoring the winning goal to beat a historically great team the English Premier League. Everyone has had enough of this shit and the cops come out and arrest the guy. They call the detective on the phone asking how he knew who the killer was or whatever. He says, "it's elementary my dear Watson," puts on a Sherlock Holmes coat and hat, and grabs a giant magnifying glass and dances his way with these ladies on a stage off screen. Surprise Sherlock, I guess, but they'd been alluding to him being like Sherlock the whole time. It is weird as shit though and comes so far out of left field that is sort of funny.