Rear Window is the greatest movie of all time 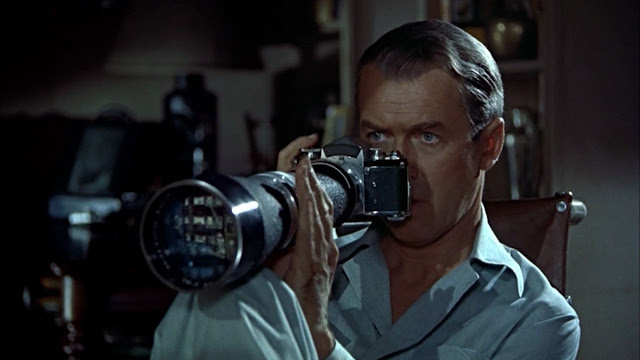 For those who are unfamiliar, the gist is that a guy with a broken leg, too much time on his hands, and excellent photography equipment gets his nightly entertainment by spying on his neighbors in maybe the most interesting courtyard in all of New York. Eventually, the behavior he sees from one of the tenants causes to suspect him of murdering his wife. Against the advise of a policeman and with the help of his beautiful girlfriendish person whom he treats like shit (played by the lovely Grace Kelly) and his nurse Stella, he investigates, almost getting everyone killed in the process. Luckily he is a photographer with million watt flash bulbs that roughly have the effect of a punch to the face. 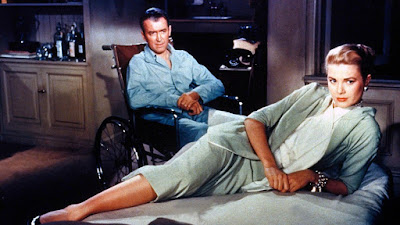 Some bullet points. Hate that the murdering fuck killed someone's dog. Someone can kill a person on screen and can be redeemed. But a dog killer can go fuck himself. Also, love the set of this movie. Was not a real courtyard. Was built on the backlot and filmed at Paramount Studios. Used to like the idea of looking out and seeing your neighbors do cool and sometimes shady shit but now that I am older see Stewart's character as sort of a sick fuck. This guy definitely has something going on. No wonder he can't commit to Grace fucking Kelly. One more thing, I dug how she ordered food from that fancy restaurant and they brought it to them in that crazy food case. This is at the beginningish of the movie. Shit was noticeably cool.

So many ripoffs of this movie it is insane. These are the ones I thought of in like one minute off the top of my head Disturbia (RW on house arrest), Fright Night (RW with vampires), Manhattan Murder Mystery (RW with Woody Allen and in a hallway), Men at Work (RW with the Estevez/Sheen bros), and The 'Burbs (RW on stay-cation plus Tom Hanks). Plus there was a really terrible remake from 1998 staring Christopher Reeve after his horse riding accident that left him paralyzed from the neck down. Bummer.

Stewart is pretty solid but yucks it up like he always does. Gotta give Kelly MVP status on this one. She so pretty and compelling in the part that she steals the show. Plus the actress that plays Stella, Thelma Ritter, is incredible. She really does a good job of jumping back and forth between being incredulous and extremely involved in the spying and what have you.