Plain Clothes is the greatest movie of all time 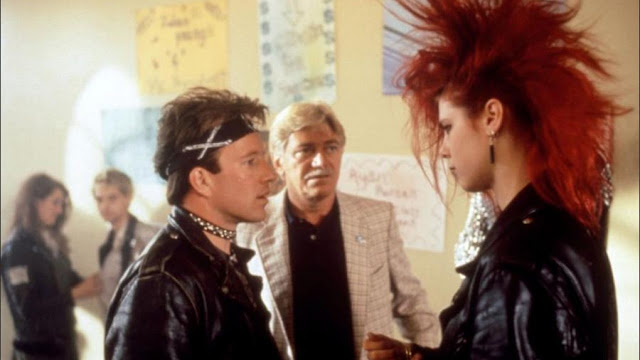 Plain Clothes. You're supposed to be helping your brother Matt, not getting nippy with some cheerleaders! Really loved this flick in my youth. Still has it's moments though I wasn't in love with it like I was as a kid. One of those putting an adult in high school movies where in this case the adult is obviously in his mid 30s. How can you go wrong with that?

Basic gist is that a youngish cop, Nick Dunbar played by 32 year old Arliss Howard, goes undercover as a high school student, choosing the name Nick Springsteen, to prove his brother's innocence of murdering one of his teachers. During this time he goes from loser to most popular kid in school with both the captain of the cheerleading team, played by one Alexandra Powers (more on her later), and a teacher, played by James Camron's wife Suzy Amis, throwing themselves at him sexually after he reads the E.E. Cummings poem "she being Brand," a car poem really about "doinking". So, yeah, Amis's teacher character is totes DTF this dude she thinks is a student. This is obviously problematic but in the 1980s was funny, apparently.

Decent amount of semi well known actors in the movie. People like Peter Dobson whom I only recognize from The Frighteners, Diane Ladd who was the fake Mrs. Mulwray in Chinatown plays the school secretary, Larry Pine who is a total that guy actor I've seen all over the place in the last couple of weeks, Robert Stack of Unsolved Mysteries fame plays the principal, Abe Vigoda plays a teacher (I feel like they had him for a day, he didn't learn any lines, and they just let him say whatever weird shit popped into his head) whom I mostly think of now in the context of that website that lets you know if he is dead or not, and George Wendt who was Nom in Cheers.

Personal favorite random guy who wins the movie for me is Seymour Cassel whom I think of mostly as Esteban ("Esteban was eaten!") from The Life Aquatic. He plays Nick's partner who also acts like his dad when he goes back to school. He more or less uses this to embarrass the shit out of him whenever he comes to the school. Does things like embrace him on his first day, saying "let's not let the same thing that happened at the last school happen here... I love you, son" and telling Nick's little cheerleader crush that he was grounded before driving off like a wildman.

Also of note is this Alexandra Powers chick. She is the high school girl that everyone treats like a goddess, the cheerleader one, but has what looks like a dead animal on her head. She was in a decent amount of things after this and was even the lead in an NBC miniseries Tonya Harding/Nancy Kerrigan movie, Tonya and Nancy. I, Tonya it was not though Powers did indeed look a lot more like Tonya that the gorgeous Margot Robbie. She apparently married one of Scientology's biggest recruiters at which point she joined the cult. Hasn't been in any movies or anything since then. Eventually joined the Sea Org so that's she'll be doing for the next three billion years unless, you know, she walks away.