Piranha 3DD is the worst movie of all time 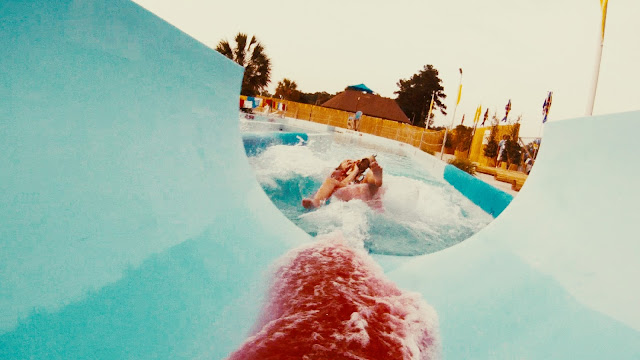 Piranha 3DD. Jesus. This ins bad in a charmless, fuck-man-I-just-watched-this way. Piranha 3D was fine for what it was. Just a dumb B-movie that was fun and over-the-top but was taken seriously. I enjoyed it. 3DD feels like a cash grab that no one took seriously. Genuinely one of the worst, least enjoyable movies I've ever seen. Did definitely learn to spell piranha though. Piranha. Look at that shit.

Rotten Tomato Consensus: It strains to up the gore and self-awareness of it predecessor, and -- despite some game celebrity cameos -- the result is a dispiriting echo of 2010's horror-comedy.

And away we go... Gist of the movie is that an ancient school of man-eating piranhas hyper-evolve in weird ways for no apparent reason and go from the lake in the first one to a new waterpark in the second. There is a whole subplot about the ownership of the waterpark with characters played by Danielle Panabaker who is apparently in Grey's Anatomy and The Flash among other things I've never watched and David Koechner who will always be Champ from Anchorman: The Legend of Ron Burgundy to me. The Koechner character turns the place into an all nude place, more or less, though they still allow in children and shit like that. Others in the movie that I recognize are
crazy hot Katrina Bowden who was the intern chick on 30 Rock and was stellar in the flick Tucker and Dale vs. Evil, Gary Busey with whom I share a birthday, the Clu Gulager who every time he shows up I remind everyone that he is awesome (his son, John Gulager who also did the movie Feast, is the director) has an extended cameo at the start of the movie (when reality goes out the window), David Hasselhoff who is leathery as fuck who is maybe the only thing I sort of like about the movie, Christopher Lloyd of Back to the Future, Doc Brown fame, Ving Rhames who was known for his role as Marsellus Wallace in Pulp Fiction but now is just the Arby's guy, and Paul Scheer from Hell Baby and all the podcasts that I listen to. 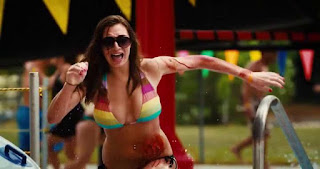 Sigh. Where to begin. I'm not what you would call a stickler for movie logic but holy shit. I mean, I was fine with the piranhas living isolated in a cave below a lake for millions of years, feeding off of each other. That is insane. Did I complain. No. But for this movie that features piranhas that that inhabit and grow inside a woman's vagina after she inhaled fertilized piranha eggs (yeah, I have no idea) which bites a guy's dick off, of course, and are able to walk on land by the end of the movie, I have issues.

I was surprised when Rhames and Sheer show up, reprising their roles from the original. This was unnecessary and sad. Rhames completely phones it in. Sheer is pro though and seems like he at least wants to be there. In the first one, he falls off a boat into a piranha infested lake but other shit is going on and we don't see what happens to him though it is assumed he is dead. But then here he is, none worse for wear. Rhames, however, now has metal legs, which come in handy when pulling people out of shallow water. But, yeah, by the time they show up, at the waterpark for some sort of therapy session, I am way checked out. There are some unanswered questions here. Like how are these two hanging out in this universe? Sure, Rhames may have lived there since he was a cop there before his disability. But Sheer was a sleazy PA for a Girls Gone Wild type outfit. Why would he stick around? Also, why would they try to break their fear of water at an adult themed waterpark? Seems like an appropriate place for this to happen, I guess. Baby steps into the kiddie pool filled with naked women.

This movie was originally released in theaters, that part is crazy enough, in 3D, which is just insane. Might be the crappiest 3D movie in terms of everything. It's worse than Jaws 3D by a landslide. Mostly, this is just crappy looking fish and girls with giant 3D boobs running around. No one wins with a movie like this.