North by Northwest is the great movie of all time 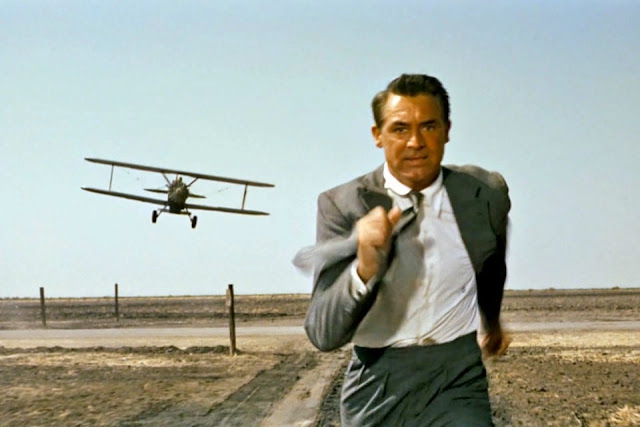 North by Northwest. Fantastic. Depending on the day, fave Alfred Hitchcock movie. Watch it every year. Cary Grant in this movie is the fucking coolest. 99% Fresh on Rotten Tomato, some fucking dipshit didn't like this movie. Again, what more do you fucking expect. If you haven't seen this flick, it is fucking awesome. It is what would happen if some hilarious guy was mistaken for James Bond and keeps idioting his way out of almost getting killed.

Gist of this movie is that Cary Grant as Roger Thornhill is out to lunch at a fancy restaurant. A waiter goes around with a phone calling for George Kaplan. Thornhill calls the guy over to order or something. Some goons are the lookout for the guy who answers the calls for Kaplan. Seeing this exchange, they decide that fucking guy is Kaplan and make his life hell for the next two and a half hours of run time. Trying to kill him and what not by filling up with booze and putting him behind the wheel and trying to buzz him with an aeroplane. You know, normal stuff. 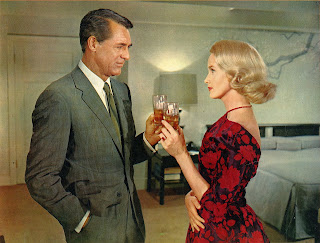 In addition to Grant, cast includes Martin Landau who actually won an Academy Award for Best Supporting for 1994's Ed Wood plays the right hand man to Phillip Vandamm whose the guy trying to have Kaplan killed (basically his henchman), James Mason who starred in all kinds of shit (A Star Is Born [the 1954 encarnation], 20,000 Leagues Under the Sea, Lolita, Journey to the Centre of the Earth, so forth) plays Phillip Vandamm, and Eva Marie Saint as love interest and bad ass spy Eve Kendall. Les Tremayne of Creature of Destruction which I did a video on couple of years ago makes an appearance as the auctioneer. Bernard Herrmann notably does the musical score. This one of his most recognizable.

If nothing else, it is definitely the funnest Hitchcock movie. First, Grant's character is hilarious, sort of a dumb guy but means well. He also has a habit of thanking people when they insult him. No universe where he doesn't win the movie. Love the scene where after he gets pegged as Kaplan and they take him to Mason's home and force all the booze down his throat and he wakes up whilst they are trying to drive him off a cliff. He manages to steady the car and then drive until finally getting pulled over for being all over the road. When he tells everyone what happened, everyone, including his mother, laughs at him hysterically. He is also asked how much he drank and responds with drunken hand gestures. You would think this would be a sobering experience for the guy but he drinks his fucking ass off for the entirety of the movie. At one point he orders a Gibson on a train. I was going to make one of these, read what it was (gin, dry vermouth, and a pickled onion), and started to dry heave. Then there is a the scene when the bad guys have him cornered in an auction house. To get out of the situation, he acts like an asshole. When the bidding for a painting is in the thousands, he starts putting in bids dollar and goes down when Les Tremayne rebukes him.  A woman then calls him a "genuine idiot." "Thank you," he says. Again, he is rebuked. Bidding is started at $800. "Eight," Thornhill says. He is thanked for getting into the spirit of things. "Eleven," he says later. "Thirteen," and when he is about to win, "thirteen dollars." Everyone laughs. He then says that is more than the painting is worth. Then he jumps up to $2000. "Excuse me?" "$2100... $2500." They ignore him and he keeps upping the bid. Finally they go to kick him out and the cops show up. At this point he punches a guy in the face. He is an all out wild man by this point. THe cops then let him go even though he is an international fugitive, long story. He finds out the chick he was into, Eva Marie Saint, whom I adore in pretty much everything, is the real Kaplan and her cover was blown, he takes off to go save her then we go have a brawl in a fictional Frank Lloyd Wright on top of Mount Rushmore. It is insane and fantastical and amazing. Best movie of all time, indeed.