Mr. Smith Goes to Washington is the greatest movie of all time 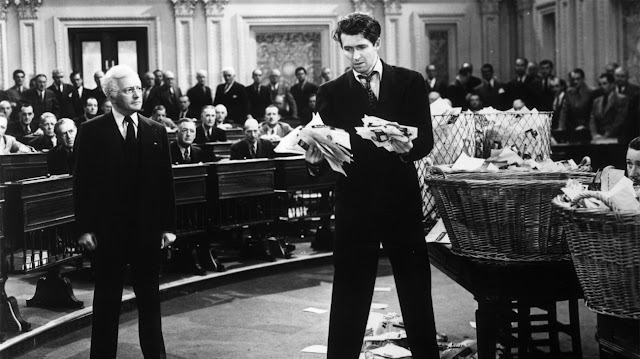 Mr. Smith Goes to Washington. Let me go! I'm not fit to be a senator! I'm not fit to live! Expel me, not him! Willet Dam is a fraud! It's a crime against the people who sent me here - and I committed it! Ah, wouldn't it be great if real life were a Frank Capra movie and guilt got the better of the corrupted in power? Don't expect Mitch McConnell or Trump to give a movie like this any mind. No political party is ever mentioned... But we fucking know. No way Trump has seen it and McConnell sees Paine as a punk and Smith is a chump. Hell, he probably took the stuff about the dam they were using to get rich on stuff as inspiration for his whole funneling government grant money to his wife scheme. Lot of "I'm doing this on principle" bullshit from Claude Rains's character, Senator Joseph Harrison "Joe" Paine (who wears glasses that constantly flash when the light hits to the point of distraction which I can't remember happening in any other movie I've ever watched), that is more the style of a few other fucking pricks. Every senator claims to be Smith. Fucking Rand Paul or Ted Cruz, for example. Most of them are Paine. Definitely that fuck Paul (and most Republicans).

Anyway, great movie, though unrealistic. Fifth 1939 film from my Greatest Years in Cinema Project. Nominated for 11 Academy Awards though it was Gone with the Wind that cleaned up that year. Considered one of the greatest films of all time, ranked No. 26 on AFI's 100 Years... 100 Movies: 10th Anniversary Edition.

With movies that are light(ish) and humble, I'm beginning to see how someone could be a Capra fan. The idealistic grandmothers among us, for example, that are shocked by whats going on in Washington today. I too feel this way though Capra is 50/50 so far for me, I strongly disliked Arsenic and Old Lace. Jimmy Stewart is perfect though in his bumpkin sort of way. As is the lovely Jean Arthur. If Stewart weren't so over the top, I'd say she won the movie. One could argue that she did but women like her didn't get to carry many political movies in 1939. The two of them are really super though and really what endeared me to the film.

Originally supposed to be a sequel in the Mr. Deeds Goes to Town universe but Gary Cooper was unavailable. Instead we get Mr. Smith going to Washington in this light political drama about a seemingly naive politician appointed to the United States Senate by a group of corrupt politicians/business leaders who want to game the system in what amounts to a get rich quick scheme. I've been told this is a plot hole but see my bit about McConnell above. Though I do concede that everything gets pretty murky when it comes to what these guys are doing/trying to get away with. It sort of like another Stewart movie from that year in Destry Rides Again where the corrupt politicians/business leaders appoint someone they think is an idiot to "represent the people" but whom they really want to just walk all over. That was actually my favorite Stewart movie of that year but this was the one that made him a star, apparently. Only other actor of note is Thomas Mitchell as "Diz" Moore. Mitchell actually wins the Academy Award for Best Supporting Actor that year for the role of Doc Josiah Boone in Stagecoach, which is coming up on my list for 1939. That was a big year for Mitchell. Played significant roles in five movies, all considered classics--the other three were Gone with the Wind (he played Scarlet's father), Only Angels Have Wings, and The Hunchback of Notre Dame. Was the second actor to win the so called Triple Crown of Acting, winning an Emmy, an Oscar, and a Tony just a month after Helen Hayes became the first in 1953. 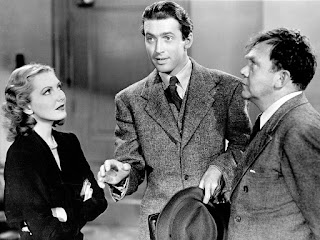 In the first half of the movie we are hammered with how idealist Smith is as he goes to DC and sees a bunch of DC shit. We watch as he gets inspired by the Lincoln Memorial, learns that he has Daniel Webster's old seat, calls the city "Worshington", and yucks it up for journalists. But this last bit gets him into trouble as papers take advantage of his good nature to make him look like an idiot. He then goes on a punching journalists tour, delivering hay makers to no less than four people in a deranged montage. He then goes and revisits all the same DC places, only this time he is sad.

But dude has a plan. For kids! Get them Boy Scouts some land. But Paine and the PA Governor, Smith's state, and some big business guy have a whole conspiracy against Smith. Fuck this guy, basically all of his buddies say after he doesn't play ball with their bullshit money making scheme that didn't really make a whole lot of sense to me. Like, if they were going to buy the land for the kids, they also would have bought it for the dam and they would have still made money, if I understand it right. So, in-ee-way, Smith, about to get kicked out of the Senate goes on a long ass filibuster session where he pleads his case. No one cares and the political machine, which controls the papers, fucks with public opinion. But the kids and Jean Arthur, his very knowledgeable aid, and who ever the fuck this Biz guy is have his back.  They go to the papers and print their own Boy Rangers paper that tells the truth though political goons take them from the kids. This shit is out of fucking control. These punch one kid in the face and later run him off the road, probably killing all the kids in the car.

But it is a happy ending with Smith's speech and such winning Paine over to the point where he confesses. This is after Paine fucking wins by pushing Smith over the edge, bringing in all of the hate mail people in PA have sent to Washington since his whole rambling talk started. IRL, the political machine chews you up and spits you out. Those with power and the most corrupt always win. Look at Al Franken vs. Trump. Paine just freaks out and that is the end of the movie. Seemingly he has been doing this shit for years. He can't just tune out Smith's hoarse ramblings for a few hours without losing his mind? I'd bet he'd be there eating a doughnut when Smith passed out, stepping over him on his way to spin it to the press. Couldn't make that shit today. No fucking way anyone buys any of that shit.

Also, this movie is featured in one of my favorite The Simpsons episodes. In it Mel Gibson is making a remake of the flick. Somehow Homer gets in Gibson's ear as a sort of everyman and what the average man wants. Not a bunch of preachy talking, that is for fucking sure, and Gibson turns it into an action movie where he kills members of the press and the corrupt senators, stalking them on the floor of the Senate. Hilarious.