What Ever Happened to Baby Jane? is the greatest movie of all time 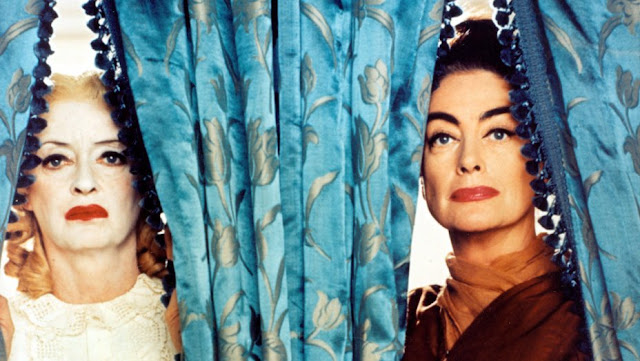 What Ever Happened to Baby Jane?. Insanity. Pair of crazy old biddies, Joan Crawford and Bette Davis, who play sisters, going at each other. In the film and in real life. So much unhinged from Baby Jane and Mommy Dearest. Davis, as Baby Jane, is fucking terrifying and completely unhinged.

Rotten Tomato Consensus: What Ever Happened to Baby Jane? combines powerhouse acting, rich atmosphere, and absorbing melodrama in service of a taut thriller with thought-provoking subtext.

Gist of the movie is a pair of sisters, Blanche and Jane Hudson, go back and forth relying on and resenting each other. At first Jane is a child star Vaudeville performer and treats Blanche like shit. Later, after film has caught on, Blanche is the star and Jane is the forgotten one. It was then that Blanche ended up paralyzed under mysterious circumstances with Jane in a drunken haze, unable to remember anything. Everyone assumes Jane ran her over with her car but Blanche eventual admits that she tried to run Jane over but instead wrecked her car and paralyzed herself in the process. 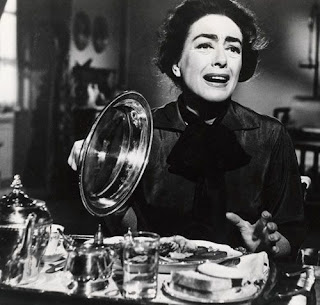 Jane's treatment of Blanche progresses from bird killing and cooking to starving/dehydrating and straight up murder. So basically from fucked to completely deranged. Directed by one Robert Aldrich who did Hush...Hush, Sweet Charlotte which was originally going to put Crawford and Davis back together but they couldn't be in the same room (more on that later), The Dirty Dozen (1967), and The Longest Yard (1974).

The film feels, in some ways, like the Samuel Beckett play Endgame where the crippled character Hamm asks his servant Clov why he doesn't leave for more or less the entire thing with interludes of trashcan parents popping up and dying, ending with Clov trying to leave but standing in the doorway, unable. Minus the absurdism, both these works of art feature characters that rely on a resentful servant in a home they are all more or less trapped in. At the end of WEHTBJ? we see Jane finally leave the home for good but she still, after everything, feels that she has to take Blanche with her.

Davis definitely wins the movie but Crawford does a hell of a job as well. By most accounts, Davis was slightly less of bitch than Crawford in real life but both had their moments and daughters that wrote extremely fucked up tell-alls about their famous moms (Davis's is actually in the movie, she's the teenage girl that lives next door). However, both were pretty progressive for their day as life-long California democrats and have a sort of a status of gay icons. Crawford was especially surprisingly cool and had a very close bond with her silent film co-star from the 1920s, William Haines, whom the studio tried to romantically link her with to keep his sexual preference out of the spotlight. When that didn't work, Haines left acting and became an outrageously successful interior designer and antique dealer with life partner Jimmie Shields. When Haines died in 1973, Crawford unsuccessfully tried to keep Shields out of the throws of deep depression which led to his suicide. Afterward, of Haines, Crawford said, "He had never kept it a secret that he was homosexual. It was never anything that mattered to me, but most people in Hollywood didn’t like it. I can’t imagine why they thought it was any of their business. What mattered to me was that for a long time, he was my best friend." So, yeah, pretty cool there. You can read more about it at much ado about cinema in this excellent article.

One last thing, what wasn't cool though was how Crawford sabotaged Davis's chances at winning an Academy Award for the role of Jane. Not only did she call Oscar voters to talk shit, Crawford reached out to all the Best Actress nominees to see which among them would be unable to attend the ceremony, offering to accept the award on their behalves. Eventual winner, Anne Bancroft for her part in The Miracle Worker, agreed and on the night of the show, Crawford gleefully accepted. Davis's reaction was indignant astonishment. Books have been about this shit.