Us is the greatest movie of all time 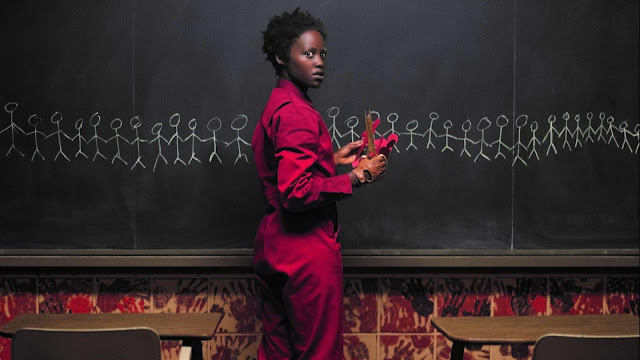 Us. If you wanna get crazy, we can get crazy. Great use of "I Got 5 on It" which takes me and the characters back to the mid-90s. Really loved it. But it ain't no Get Out. Academy Award Nominee this will never be, even in this year of complete shit.  Feel like director Jordan Peele has the potential to be hated for the same reasons that M. Night Shyhamalan is hated. Mainly the twist stuff. That seems unlikely, at least IMO. Good sophomore movie though.

Rotten Tomatoes Consensus: With Jordan Peele's second inventive, ambitious horror film, we have seen how to beat the sophomore jinx, and it is Us. 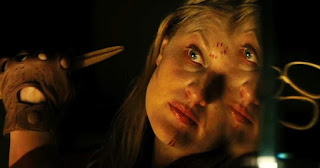 Gist of the movie is that Adelaide played by Lupita Nyong'o (she was female lead in Black Panther) runs into her doppelganger whilst vacationing at the Santa Cruz Boardwalk (the same one where they filmed The Lost Boys) right around the time of the Hands Across America event in 1986 where people all over America formed a human chain, holding hands from coast to coast (that didn't quite work but it was indeed a shit ton of people holding hands for something [to fight hunger and homelessness] that was soon forgotten). This, apparently, you know, fucks her up. Cut to 30 something years later and see she has married one Gabe Wilson played by Winston Duke and birthed two kids, Zora played by Shahadi Wright Joseph and Jason (Evan Alex). The group goes on vacation to their fly-ass home near the beach hanging out with a couple, played by Tim Heidecker from Tim and Eric Awesome Show and unfortunate Scientologist Elisabeth Moss of Mad Men and The Handmaid's Tale fame, and their twin daughters. One evening they are visited by their clones--the clones are "tethered" in a way where their actions on the surface were mirrored by the doppelgangers underground--who we find want to coexist peacefully. JK. They want to murder them and then perform their own Hands Across America.

A lot of the clone stuff is unexplained which I liked. Don't like how they sustained themselves whilst down there. Slaughtering rabbits and what not. My clone wouldn't do that (another JK). They say they were cloned by the government or something but it isn't really the focus. Just that they are there, trying to take over. What their endgame is though is also sort of mystery. The Doppelganger Hands Across Clonemerica is a great first day, I guess, but what are you gonna do after that? Like a guy whose retirement plan is to sip margaritas on a beach somewhere, these guys need to start thinking long-term. 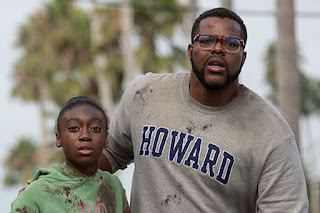 The movie is a pretty effective social commentary. On one hand, preaching to the choir. On the other, I think we need as much of this shit as possible during this Trump era of bullshit. Peele, for his part explained it thus to The A.V. Club :

"One of the central themes in Us is that we can do a good job collectively of ignoring the ramifications of privilege. I think it's the idea that what we feel like we deserve comes, you know, at the expense of someone else's freedom or joy. You know, the biggest disservice we can do as a faction with a collective privilege like the United States is to presume that we deserve it, and that it isn't luck that has us born where we're born. For us to have our privilege, someone suffers. That's where the Tethered connection, I think, resonates the most, is that those who suffer and those who prosper are two sides of the same coin. You can never forget that. We need to fight for the less fortunate."

Peele sees our pleasure as someone else's pain in a way that is hard to disagree with. Basically everything we buy comes at the cost of someone's suffering, which is fucked and at times debilitating, at least for me.

Anyway, the hands down MVP of the movie is Winston Duke whom you may remember from his part as M'Baku from Black Panther. I'd say the dude was meant to be an upper middle class guy throwing out dad jokes for 90 minutes, as he did in this movie, if he wasn't so great in BP. Also, have a soft spot for my vegetarian, former college football playing brethren.