True Romance is the greatest movie of all time 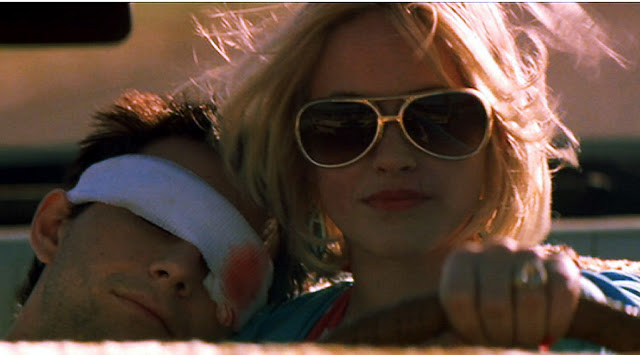 True Romance. Must have thought it was white boy day. My introduction to Quentin Tarantino. With Once Upon a Time In Hollywood coming out tomorrow I'm revisiting this magnificent flick that totally blew my little mind as a child. Tarantino through the eyes of Tony Scott, this movie is perfect. I've watched it 20 times since 1993 and pick up new details every single time. This, not one of Tarantino's 10, is for me, depending on the day, top three movies he's written. I really, really love this flick.

Rotten Tomato Consensus: Fueled by Quentin Tarantino's savvy screenplay and a gallery of oddball performances, Tony Scott's True Romance is a funny and violent action jaunt in the best sense.

On days when Tarantino comes out with a new movie, that should be a national holiday. I've got too much shit over the next week and am going to have to sandwich seeing With Once Upon a Time In Hollywood (which sort of feels like a companion movie for TR, another industry movie that takes place in L.A.) in on a day I've got shit going down, work on Thursday/Friday, trivia on Thursday, 2001: A Space Odyssey on the big screen on Friday, my female companion is out doing shit all day on Saturday, volunteering on Sunday. If I had spaced out my time off better, I'd have taken the day off on Friday. As it stands now... Sorry, babe, Saturday is the day I'm seeing this. Don't worry though, I'll probably see it again. 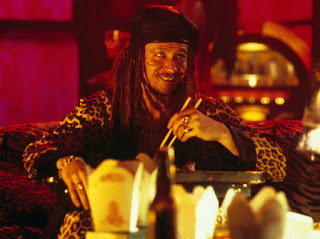 Anyway, True Romance. Detroit comic book store guy Clarence Worley, played by Christian Slater, meets and marries a bubbly and adorable prostitute, Alabama Whitman played by Patricia Arquette. This leads to him murdering her pimp and stealing a shitload of cocaine which they try to sell to a filmmaker in Hollywood. However, the Mob and the police find out and shit goes down in what is more or less a Tarantino autobiographical wish fulfillment movie. The cast for this movie is incredible. Like holy shit. Appearances include James Gandolfini who is brilliant as this monster of Mob hit man in the first thing anyone had really ever seen him in, Dennis Hopper as Clarence's dad, Samuel L. Jackson as a random drug dealer killed by Alabama's pimp, Val Kilmer as Elvis (don't ask), Gary Oldman as drug dealer/pimp Drexl, Chris Penn and Tom Sizemore as cops, Bronson Pinchot (most known for his as Balki from the sitcom Perfect Strangers) plays a pivotal idiot who sets up the deal between Clarence and filmmaker Lee Donowitz played by Saul Rubinek, Brad Pitt as Floyd (easily my favorite character), Michael Rapaport as the friend in Hollywood, and Christopher Walken as the Mob boss.

Here's some interesting shit about Oldman's Drexl character who has the best lines in the movie. He gets to say that Clarence "must of thought it was white boy day" and "Y'know what we got here? Motherfuckin' Charlie Bronson." Dude based it on his personal drug dealer. Apparently Tony Scott told him he is a white dude who thinks he is black. Oldman was like, I've got it and rolled with it. This was according to interviews Scott did. Oldman, however, walked that back, saying he didn't have a drug dealer. This was a different time when smoking pot wasn't as socially acceptable. He said he based it off of kids in his neighborhood or some such shit. He really rolls with it when he sizes up Clarence, making a bunch of assumptions that Clarence then shoots to shit in one of the many unforgettable back and forths in the film. Shit is perfect. Most of this I learned from The Ringer who did a Rewatchable on the movie last year. If you like Bill Simmons, love that guy, and this movie, you have to check this out. 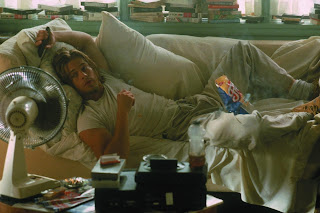 While Oldman is truly unforgettable, Brad Pitt's character Floyd, the stoner on the couch, has long been my favorite. Don't condescend him, man, he'll fucking kill you. He is the ultimate lazy stoner, my people. Dude is my spirit animal. For real.

Really hard to say who the MVP of the movie was. Maybe Arquette who was conceived as Tarantino's dream girl (and it shows as she is really cute and really cool) for her unbelievable performance, Scott for his vision in directing this slick sort of light film that we never get with Tarantino, or Tarantino for this masterful script that definitely is part of his interconnected universe. Ultimately, went with Tarantino, who planned on financing Reservoir Dogs with what he made off this script. See Tarantino gave Tony Scott both RD and True Romance to read to try to get made. Scott wanted to make RD but by the time Scott was ready to make one of the films, Tarantino had already set his mind on directing RD. Was using the $50,000 he got for the script to pay for RD but when Harvey Keitel read the script and agreed to star, Tarantino and producer Lawrence Bender were able to raise $1.5 million for the film. You can read more about it at Film School Rejects. Something else that is pretty cool is that Keitel's character, Mr. White, in RD which came out a year before TR, is asked by Joe Cabot, the older bald leader guy that looks like The Thing, about "Alabama." Mr. White tells him him that they haven't worked together for a year and a half. This was part of the Tarantino shared universe but Scott changed the ending of the script as Clarence was supposed to die with Bama apparently working on steeling jewels with Mr. White.