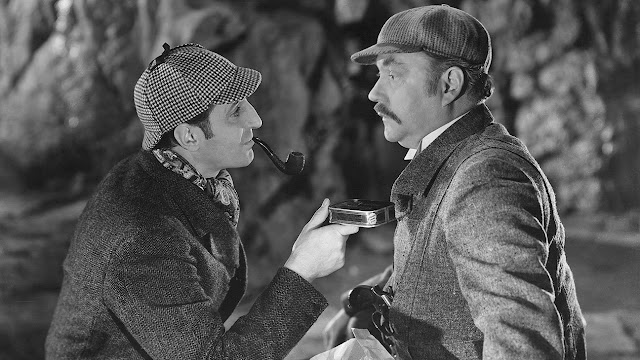 The Hound of the Baskervilles. Oh, Watson. The needle. Second movie of the Greatest Years in Cinema Project. Third from 1939. Great flick. Thought I knew the story but the film threw me for a loop. Solid performances. Basil Rathbone sets that early standard for Sherlock Holmes and totally wins the movie. Richard Greene, who strangely got top billing as 20th Century-Fox didn't think that Sherlock was a bankable character, as Sir Henry Baskerville is notably great as well. Suspenseful and atmospheric, the moor where the film takes place are dark and ghostly. Still one of the best portrayals of the character.

Not super faithful to the Arthur Conan Doyle novel but considered one of the best of what is likely his most beloved work, the gist of the film is that Holmes, along with Dr. Watson (played by Nigel Bruce) who is portrayed as something of chubby-cheeked embarrassment, investigate a legendary giant dog that supposedly curses the Baskerville family in a "black dog" situation as this dog is a fucking bear.

This film is extremely enjoyable and at times pretty funny. Not sure how intentional much of that is. Like the scene where this beast of a dog pushes a guy off a cliff. More of a cat move if you ask me. Also, there is this guy Mr. Franklin who is a just crazy asshole. He keeps accusing this Jack Stapleton guy , neighbor of Sir Baskerville, of being a body snatcher for what we learn is basic anthropological work. Towards the end he offers Baskerville a ride but he is like, "well, since there is nothing to worry about, I'm gonna walk." This old fart is all "Fine, reject it, just doing it to be polite."

Holmes has his moments of humor as well. Whilst watching the movie, at a certain point after Holmes has sent Watson to investigate and we haven't seen Sherlock for a half hour, I was asking "what the fuck happened to Sherlock? He is barely in the movie!" Meanwhile, after watching Watson schmooze it up in the moor, he runs into this old bearded guy that has been hanging around the area and popping up each time shit has gone down and what not. Watson tells the guy he is Sherlock and that is why he has the authority to be snooping around or whatever when the bearded guy shockingly tears his beard and chops off and it is the real Sherlock who has been investigate shit the whole time. Didn't see that shit coming at all! Then there is the end of the movie after the mystery has been solved and what not. This comes when everyone awkwardly stands around like, "uh, thanks?" and Holmes kicks everyone out like, "yeah, I'm tired, goodnight, oh, and Watson, shoot me up." It was a serious WTF moment.

Somethings I was not so crazy about was that Sherlock shot the dog. Poor pup. Maybe it lived though. Also, the way Sherlock solves the crime is weak AF. Sees this Stapleton fellow, who was a distant relative of Baskerville, has the same eyes of some Baskerville ancestor that hangs in a painting in the estate home and would thus inherit family fortune if everyone else was out of the way. So he recognized a slight family trait. Meh. Other than that, pretty solid and enjoyable enough.