The Cat and the Canary. Third film in the Greatest Years in Cinema Project. Fourth film from 1939 in total. Fulfilling the obligatory horror portion of the project, it is a fun little comedy horror flick. No Abbott and Costello Meet Frankenstein but it is solid enough. Probably shan't be watching it again any time ever, but it was fine.

Was based on a 1922 stage play by John Willard. This was the third of  six versions based on the play. Others included a 1927 silent version, The Cat Creeps from 1930 which was the first Universal horror film with sound and dialogue (it is considered a lost film), 1941's The Black Cat which has a different ending, and 1979 British version with people you've never heard of.

Stars Paulette Goddard, a pretty lady known for her work with then husband Charlie fucking Chaplin (they divorced in 1942), she was the lead lady in both Modern Times and The Great Dictator, which came out in 1940, the no introduction needed Bob Hope who yucks it up throughout the whole flick, and Gale Sondergaard (she plays the mistress of the estate, Miss Lu) who was originally cast in the Metro-Goldwyn-Mayer's classic The Wizard of Oz, which you may have heard of, in the role of the Wicked Witch of the West. At that point in the production, the character was conceived as a more glamorous type witch, like the Snow Queen of Narnia or something, but when they decided on the green skin and prosthetics, she called bullshit on that. Honestly, even with how beloved the film is now, probably a good call on her part, which I will get into in more detail when I write about that movie. But Sondergaard didn't hurt for work. In her early 40s when this movie was released, the lady cranked out 39 roles in 10 years but most of the movies were of the B-horror variety.

Gist of the movie is that 10 years after old rich guy Cyrus Norman his family and a random actor, one wisecracking actor Wally Campbell (Hope), gather for the reading of Norman's estate which he has left to distant relative Joyce Norman (Goddard) who gets everything so long as she can stay sane for like a night and a day, which proves difficult as a bunch of shit goes down. If she can't keep it together, it all goes to someone else whose name is sealed in an envelope, supposedly unknown. Yeah, this doesn't make a lot of sense. The point, it seems, was to make her look crazy but it's hard to be like, "she is cray, give me the money!" when the executor of the will gets murdered within an hour proving that someone is out to get her. 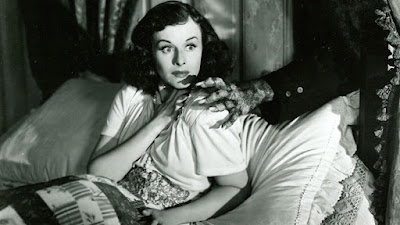 Goddard is solid enough in this though she wasn't really asked to carry the movie. A bit more on Goddard's 1939, she was originally considered for the role of Scarlett O'Hara in Gone With the Wind and even did some Technicolor screen tests. Producer David O. Selznick and original director George Cukor liked her enough that they were willing to set her up with an acting coach. That was until Vivien Leigh auditioned for the part. There are, however, rumors that her relationship, both personal and professional, with Chaplin played into the decision to go with Leigh over Goddard. As it goes, Selznick was worried about the scandal of Chaplin and Goddard's relationship status, living in sin, supposedly, there are questions about the legality of their marriage, but that seems like bullshit because everyone involved here knew that Leigh and Lawrence Olivier had the same shit going on. There was also Goddard's pre-existing contract with Chaplin's studio which may have had legal implications with casting her. That too seems like horse shit. It's more likely that Leigh was just too perfect for the role and Goddard was considered slightly too old. You can read more about all this in The Atlantic article "The Making of Gone With The Wind (Part I)" which is a hell of a read.

Overall, a pretty enjoyable watch with some pretty solid suspense, especially at the end. The set design is what I walked away most impressed with. Dark passageways and a foggy estate in the Bayou where a mysterious monster lurks. Supposedly this and the 1940 film The Ghost Breakers which also starred Hope and Goddard and sounds like more or less the same movie were what inspired the design of Walt Disney's Haunted Mansion ride at Disneyland.

Believe there are shades of this movie in Murder Mystery, a Jenifer Aniston Adam Sandler Netflix movie, also maybe the New Orleans haunted house/demon baby movie Hell Baby. At the end it is hard to say who is against her and who has her best interest in mind. Not super surprising who the killer is but you are kept guessing until the reveal at the end. Hope was sort of funny in a dad joke kind of way and probably won the movie. He is solid, I guess, but way over the top.