The Birds is the greatest movie of all time 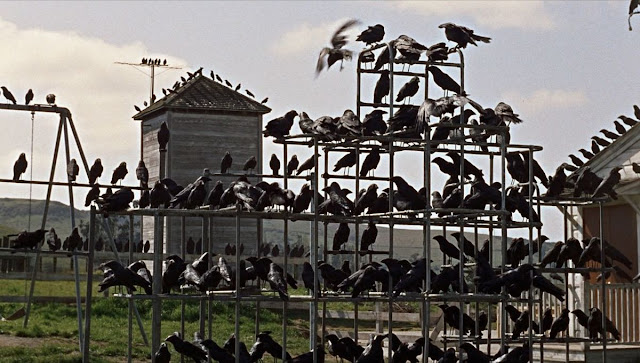 The Birds. Wasn't all that excited to see it. But great flick. Also, ridiculous. If, like me, it has been probably 30 years since your last watch, you likely remembered it as constant birds attacking and completely terrifying. In reality, it's mostly a very strange love story with some mommy issue stuff that turns into an insane creature feature for the last half of the movie. But you needn't concern yourself with any of this shit. All you really need to know is that the birds go crazy and start killing people. There is a weird sort of love triangle thing going on, the male lead has some weird shit going on with his mom, and the Lambert from Alien as a little kid is in it. But you don't really need to know or remember any of that shit because the take away from this movie is, if they wanted to, birds could fuck you up.

Rotten Tomato Consensus: Proving once again that build-up is the key to suspense, Alfred Hitchcock successfully turned birds into some of the most terrifying villains in horror history.

This movie, is ridiculous. There are few things that have made me laugh like this movie. One, Pet Sematary, was unintentional. This, I suspect, was sort of supposed to be funny. What I refer to are two birds attack scenes. The first, first time the birds really lose their shit, is at this little kid, the kid one Cathy Brenner played by Veronica Cartwright from Alien, birthday party. Here we get gulls trying to lift kids up and fly off with them and others laying there, kicking and screaming, just sort of taking it as a lone bird pecks at them and shit. Fucking funny. The next is the big climactic one that is almost Zoolander esque with everyone that we give a shit about, save for maybe a straggler, sort of congregating at a diner filled with clueless yokels, half of them, incredibly, ornithologists who don't believe them. As they look out the windows, they see the birds attacking and the town descending into chaos which culminates in a gas station attendant spraying gas everywhere. We get the obligatory explosion when an idiot decides this the perfect time to light his cigar. This attracts more gulls which then attack the people that are out there trying to put out the fire. Slapstick AF.

Have to say Hitchcock wins the movie for the subtle humor and extreme building suspense. Doesn't get much better or more nerve racking than the scene where socialite Melanie Daniels, played by the lovely Tippi Hedren, sits outside of the school where Cathy and other kids get their learn on, next to the playground where more and more crows keep gathering on the equipment as she cluelessly chills with her back to the murder.

Really though, Mitch Brenner, played by Rod Taylor, whom I think of as the guy from The Time Machine, is the one who wins at the genetic lottery, as he has two crazy beautiful women totally in love with him in Daniels and school teacher Annie Hayworth played by Suzanne Pleshette. But really dude is a fucking loser as he lets his mother, Lydia Brenner played by Jessica Tandy, dictate his love life and shit. In the end, though, Hayworth gets pecked to death and Daniels is PTSDed as fuck. Let this be a lesson to all you mamma's boys out there.