The Big Sleep (1946) is the greatest movie of all time 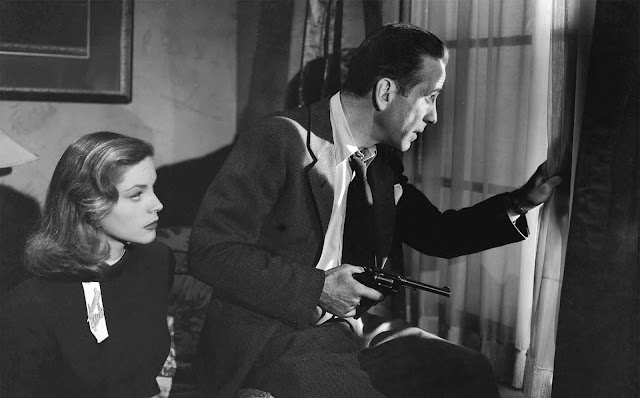 The Big Sleep. 1946 version. Great. Supposedly... But I thought it was sort of run of the mill. Just your typical beat-for-beat procedural detective flick. It is beautifully shot, interesting, and the ending is great. I think I was just expecting something a little more revolutionary. This is just fine.

Howard Hawks film. Bogie. Bacall, who is still alive! Second film together. The first, To Have and Have Not, also directed by Hawks, based on the work of Ernest Hemingway. The real life couple would do three more. The others, Two Guys from Milwaukee, Dark Passage, and Key Largo. This is supposed to be the best.  Based on the novel by Raymond Chandler, the first novel that features private detective Philip Marlowe, not to be confused with Sam Spade, the Dashiell Hammett gumshoe, the other hard-boiled detective made famous by Humphrey Bogart, with the William Faulkner working on the script. Lots of twists and turns. No one is to be trusted. Should love it but was sort of meh about it until the end. Liked it alright but got impatient.

That ending though. That was good shit. After we find out whodunit and what not, we get this big, isolated ambush scene but Marlowe gets the jump on the villain, Mars, played by John Ridgely, and at gunpoint makes him leave the house where his own goons await, ready to shoot the first person to come through the door. The scene is reminiscent of L.A. Confidential which that film obviously pays homage where Exley and White have their big gun battle out in an isolated bungalow.

Solid but not likely to make it past the next purge of my Plex server. Though it did get me interested in the Bogie's other work. Also, without this movie there would be no The Big Lebowski.

Edit: Oh yeah. 1946 is considered one of Hollywood's greatest years. I'm going to take five of Hollywood's best and look at several movies from those years and make the decision of which is top dog. Going to official announce what years I'll be looking at soon but I'm pretty sure 1946 is going to be on there. Tune in tomorrow for the other four.