Singin' in the Rain is the greatest movie of all time 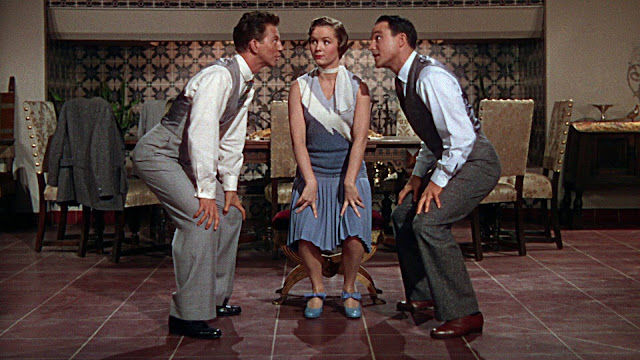 Singin' in the Rain. "I'm laughin' at clouds, so dark up above, the sun's in my heart, and I'm ready for love." Holy shit, this movie. Metro-Goldwyn-Mayer producer Arthur Freed takes all of the best show tunes he wrote with Nacio Herb Brown from MGM best musicals and builds a plot around them. Gene Kelly, Donald O'Connor, and Debbie Reynolds choreograph and sing the shit out of them. MGM, the studio, then scales them to infinity. It's genius. If you don't fucking love the shit out of this movie, there is something really wrong with you. If I'm having a shitty time, this is the movie I put on to break me out of it. "I'm happy again!" This film is light, vividly colorful, a feast in every way a film can be. It is perfect. I will fight anyone who says otherwise. I really believe, like for real real, maybe, I don't know, that this is the best film ever made.

Rotten Tomatoes Consensus: Clever, incisive, and funny, Singin' in the Rain is a masterpiece of the classical Hollywood musical. 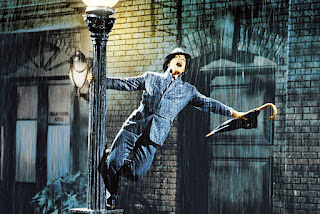 Love a self-referential flick, as has long been established. I've been especially into these older Hollywood movies that focus on an even older Hollywood. This flick, Sunset Boulevard, Whatever Happened to Baby Jane, so forth. In this one we get a 1950s history of the transition from silent pictures to sound. We even see how it was done in those early days, which is cool. Here we have an actress, Lina Lamont, played by Jean Hagen who is best remembered for her role in John Huston's The Asphalt Jungle, who was a star in the silents but sounds like shit and has to have her voice dubbed. Megastar and Lamont's fake, studio boyfriend, Don Lockwood, played by the Gene Kelly who wins the movie, falls in love with the girl dubbing her lines and providing her singing voice, Kathy Selden played by the lovely Debbie Reynolds. The only real conflict in the movie is that Lamont is a bitch who steals all the credit away from Selden which keeps her from becoming a star. But that shit doesn't work out because this is lighthearted picture. 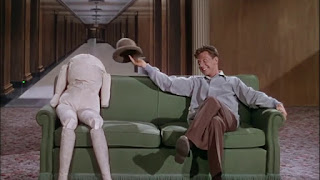 But here's some weird and interesting shit, Hagen, the actress playing Lamont, when she has her voice budded in the acting parts, Reynolds does sing, of course, is actually using her own voice. So she is using her own voice, but we are lead to believe that the voice we hear is Selden's. Definitely a mind fuck.

So much iconic shit in this movie. First, there is Kelly's "Singin' in the Rain". OMG. Then there is the "Moses Supposes" scene, one of two original songs in the film, where Donald O'Connor as Cosmo Brown, Lockwood's vaudeville partner and sort of his boss as the head of Monumental Pictures' music department, work with a speech coach in preparation for the transition to sound when they just ham it the fuck up and sing and dance all over the goddamned place while this coach guy stands there like an idiot. Love it. The three of them, Kelly, O'Connor, and Reynolds, in character, of course, performing the shit out of "Good Morning," one of my faves from the Judy Garland/Mickey Rooney movie Babes In Arms, worth a watch as well.

But the best has to be O'Connor doing the original, though very similar to Cole Porter's "Be a Clown" from another MGM flick, song "Make 'Em Laugh." The song is awesome and O'Connor's dancing is incredible. His athleticism is amazing. He dances up walls, running up them and flipping back to the ground, and does impressive physical comedy with a mannequin. These are all long shots. No cuts. We see all the moves and the actors have to be spent after their number. This one ends with O'Connor throwing himself through a wall after what can only be truly maximum effort. This movie and this number are the shit.