Revenge is the greatest movie of all time 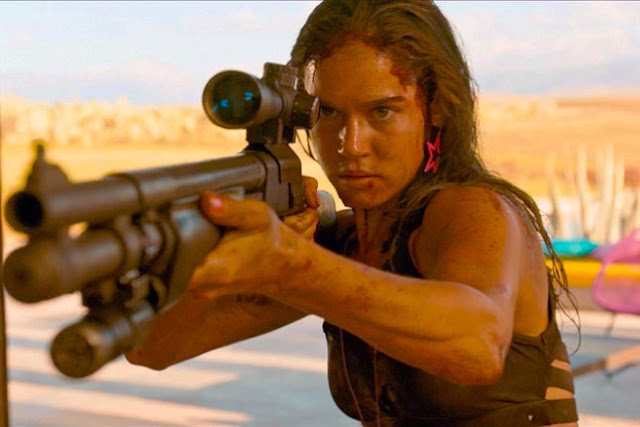 Revenge. Do you like rape revenge movies? Of course not. Usually too into the rape, if you know what I mean, or turn the victim into a psychopath. Examples of the former would be I Spit on Your Grave or Last House on the Left or Eye for an Eye, while examples of the latter would be Ms. 45 or Teeth. This movie, however, is one of those rare flicks that does it right, movies that are becoming more common as we become more woke to such things. Some examples of these movies would be American Mary and Bound to Vengeance. This one does it perfectly. We get enough of the shit to not only hate the rapist, but also get a glimpse at the dude's bros, the worst of whom isn't even the rapist, who enable rapists, the culture, and are violent against women. All that stuff goes down pretty quickly (the rape happens, it's terrible, it's effects are lasting but we don't have to sit there and watch it for half an hour) and we get right into her fighting for her survival in an extremely satisfying way in this gem of a revenge movie. Greatest movie of all time.

Pros: Sick cinematography. Great use of landscape and color. So. Much. Blood. Like an unreal amount.

Cons: While it's not Funny Games or anything, it still features a lot of uncomfortable violence against a woman.

Gist of the movie is trio of rich as fuck friends convene on a remote island somewhere for their annual hunting trip. One of them, Richard played by Kevin Janssens (good time to point out that all of these actors are pretty much unknowns), brings his young mistress along, one Jen played by Matilda Lutz (she was the lead in the film Rings which is still on my to watch list). They get along for a day, drinking, flirting, dancing, and doing drugs, but Richard's buddy Stan (Vincent Colombe) thinks that Jen was coming on to him and tries to have sex with her. When she refuses, he brutally rapes her. She cries for help within earshot of the third friend on the trip, Dimitri (Guillaume Bouchède), turns up the volume on the TV before going outside for a dip in the pool. When Richard comes back, Jen tells him. When he barely gives a shit, saying she wants to leave and what not, and that if she can't, she will tell his wife, he beats her. Next thing everyone knows, she is out the door, sprinting for her life. Once she gets to the edge of a cliff, they push her off. Through grit, she survives and the dudes set out to find her and finish the job, only Jen is tough as fuck and hell bent on getting her mother fucking revenge!

Hard to call a movie with a brutal rape and so much violence beautiful but this is. Vividly colorful, the movie is a feast of natural beauty. It is also a very satisfying movie as these three are some of the most easily hateable characters of all time. Spoiler, there are three kills total and all of them are fucking great. She gets hers.

This Kevin Janssens guy wins the movie. Dude was a pretty convincing psychopath. Sort of reminded me of Aaron Eckhart. Totally an alpha male type who treats everyone, including his mates, like complete shit. Spoiler, there is this super intense scene when they are back at the house and it is just him and Jen left alive at this point. He is naked running around the house hunting her like a mad man. Think American Psycho except more deranged. Making it even fucking crazier is when she shoots him and then she is hunting him. But he seran wraps his guts in and the two of them are chasing each other around in circles for a crazy long time, each with the intent of killing the other. When she slips and falls and he finally catches her and knocks her out. He begins to choke her out and you think she is done but reaches in through the plastic wrap and pulls some of his guts out at which point she shoots him point blank in the chest with a hunting shotgun. There is so much blood in this house it is fucking unbelievable. And so ends this amazingly beautiful rape/revenge fantasy (or whatever you want to call it).

The debut film of one Coralie Fargeat. This lady is going places. The movie is one of my favorite horror, since it's on Shudder I'mma call it that, movies of last year. Get a lot of use out of that subscription. That and Mandy were Shudder exclusives. Two great, trippy films. Shudder has so much good content. This was one of the best. Can't wait for Fargeat to make more flicks. Check this one out. Loved it.