Prevenge is the greatest movie of all time

Prevenge. British. Pretty good for an independent movie with little budget. Is sort of marketed as a comedy horror. Would more call it a horror movie that has some dark comedy tossed in. It's pretty solid. Carried by the performance of Alice Lowe who is great in the film. She also directs. This is her first movie. She was really pregnant in the flick. Looks like a young Catherine O'Hara (the mom in Home Alone who is also in pretty much every Christopher Guest movie). Took me forever to realize where I knew her from. It was the British show I fucking loved called Garth Marenghi's Darkplace. She plays Madeleine Wool/Liz Asher. The female doctor who "went to Harvard College Yale, passed all her classes, and got an A." One of my favorite programs of all-time and what opened my eyes to British humor. Anyway, the movie is pretty good and very engaging. Mostly because of her. She wins the movie. Also, the (mostly) dickbags that she kills. They are good, too.

Rotten Tomatoes Consensus: As ambitious as it is daringly transgressive, Prevenge should thrill fans of pitch-black horror-comedy -- and open untold opportunities for writer/director/star Alice Lowe. 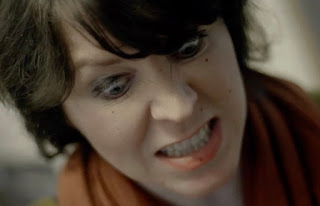 Gist of the flick is that a recently widowed pregnant woman, Ruth (Lowe), is told to kill the people "responsible" for her baby daddy's death (we get bits and piece that show him on a climb and his line getting cut with him falling to his death in a situation where they had to sacrifice him in order for the rest of them to survive) by the unborn fetus growing inside her. The film is basically a slasher movie told from the perspective of the killer. It also stars Tom Davis, Kate Dickie who is in a bunch of stuff like Prometheus, Game of Thrones (she is Catelyn Stark's sister who breastfeeds her nearly grown son), and The Witch, Kayvan Novak who stars in the television version of What We Do in the Shadows and is also one of the terrorists in the mockumentary Four Lions, and Gemma Whelan who is also in Game of Thrones as Yara Greyjoy and one of the detectives from the show The End of the F***ing World (she also looks straight up like a former coworker of mine).

A bit on the costars. Also, spoilers. Never seen this Tom Davis chap before but he is memorably good and disgusting as fuck. At one point he pukes in his afro wig and then goes in for a kiss. He then tells her she looks like Elton John whilst trying to bone her. Killing this guy is easy because he is such a piece of shit. Ruth asks if anyone loves him and he tells her his mum. We then see his mother lives there with him and is seriously clouded mentally, coming out several times to do the laundry. He sort of berates her and then gets murdered by Ruth. The mom comes out during this and says something about that needing bleach, you see, Ruth cut his dick off and he is covered in blood. As Ruth puts her back to bed, the mom tells Ruth she is too good for her son. Yep, even the mom knows. This looked like a fun role and the actor does a good job yucking it up. Whelan is pretty funny, too. Ruth poses as someone going door-to-door for charity who attacks her. But she is proper fit, as the Brits say, and throws on boxing gloves to defend herself punching Ruth in the gut even though she is preggers. After Ruth finally kills her with the cops on in earshot, she has trouble opening the door and has to escape through the doggy exit, dragging her enormous belly along the bottom of it as she goes. 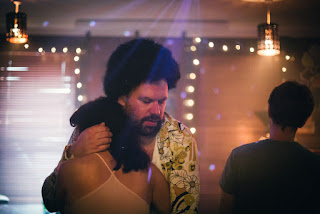 Not all of the people really seemed to deserve to die like the Davis character or a creepy pet store owner whom she kills first. Like the HR chick, Dickie, sort of sucks, I mean, I wouldn't hang out with her, but she isn't terrible. Like every HR person. But she gets got. Then the flatmates, at least the one we talk to, is lovely. Does kind of complain about the other one, the one that was part of the event or what have you, but goes out of his way to say what a good guy he is. They get it too and one of them wasn't even there at her husband's death. He was just a witness to her crime.

Eventually she has the baby (on Halloween whilst she is dressed like some sort of demon) and with the help of Kayvan Novak (who was the climb leader who cut the rope on her dude so the rest of them survive) realizes that it wasn't the baby making her kill, she was doing it for herself. We think she learns her lesson or whatever and then, in the final moments, she returns to the spot where her dude died and the Novak character is there. They sort of smile at each other and then Ruth screams in rage with Novak looking on in horror. Yeah, she gonna kill him anyway.

That last scene is pretty representative of the film's humor. Dark as shit. You aren't gonna LOL but you'll chuckle in a fucked up way. Pretty solid flick that you can find exclusively on Shudder. Check it out.