Piranha 3D is the greatest movie of all time 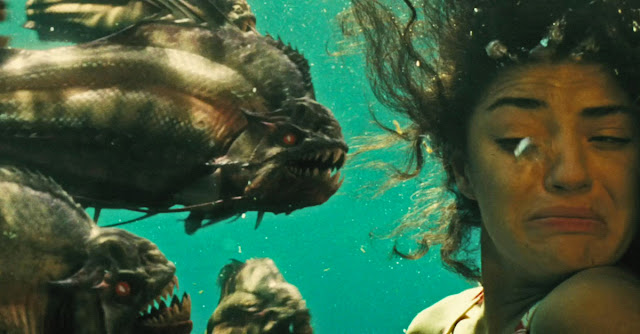 Piranha 3D. Trash. But fun AF. My female companion was pretty sure we'd watched this but no. That was either the original 1978 Joe Dante Piranha movie, which I loved as a child, or 1979's Killer Fish which was part of MST3K "The Return" on Netflix last year. Try to keep up. But I'll definitely watch this movie again. 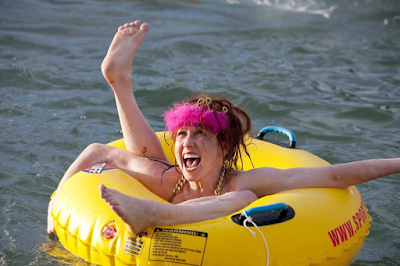 Lots to like here. Ridiculously over-the-top. Shitty CGI that they roll with. Solid B-list cast. Gore. Gratuitous nudity, the best kind. This movie does indeed have it all. Sort of weird watch all the shots that were done for 3D in standard 2D but other than that, I can't complain as the movie is what I've known it would be since it came out back in the day. Didn't see it in the theater which is surprising.

Most of the kills are meh because the CGI looks so bad. Lot of faces and eyes getting eaten off. There is a chick parasailing on the back of a boat with her giant breasts out. Thought she was going to pop up with piranhas hanging off her nips but the movie isn't that silly though one of the "Wild Wild Girls" does get eaten and her implants float up to the surface. One of the victims that popped out was a redhead that gets pulled under on her inner tube. I recognized this chick as a contortionist I follow on Instagram, one Bendy Bonnie, aka Bonnie Morgan. I've long been fascinated by stretchy people, probably because I'm so not even though I work on it every day (yoga every fucking day and I can't just reach down and touch my toes [though I can after a minute or two]). First on my radar from this show I fucking loved that got cancelled called Hap and Leonard. She was a bendy former lover. In this movie she bends herself in half. She is pretty and seems cool and it was weird seeing a minor celebrity you follow online just pop up in a movie like this. 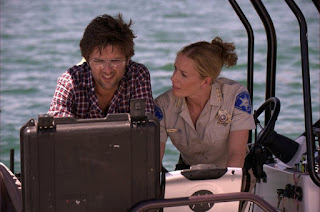 Moving on. Basically the same setup as The Meg. There is a cavern under the body of water where another body of water lies, one filled with prehistoric creatures that have a taste for humans, apparently. First casualty is Richard Dreyfuss who is supposed to be his character in Jaws, Matt Hooper. Self-referential and what not. Also get some meta commentary from Jerry O'Connell who plays Derrick who is the man behind the camera of a Girls Gone Wild type of thing. The real guy that the character is based on, one Joe Francis, great guy I'm sure, was hella pissed as O'Connell was super upfront about basing the character on this douchebag. In his official statement after Francis threatened to get lawyers and shit involved, O'Connell said "I get to play Joe Francis! Oh, wait. For legal reasons I'm supposed to say, 'I play someone loosely based on Joe Francis.'" For this alone he pretty much wins the movie. Obviously have little respect for this guy as they portray him as being fucking terrible and his character gets it rough with the piranhas biting his dick off and his last words being "wet t-shirt contest."

Have one of my all time beauties here in Elizabeth Shue, still looking fine. Have a bunch of naked ladies but they all look meh compared to Shue though she seems to sort of phone it in. Adventures in Babysitting Shue this is not. But the movie is extremely entertaining and a fun watch. Also get some cameos from Christopher Lloyd and Eli Roth who were each on set for probably 15-20 minutes. Ving Rhames, Paul Scheer from like every podcast I listen to who was just in Hell Baby, and Adam Scott from Parks and Rec and Party Down are in the movie as well and are all serviceable. Again, a really fun ride for what it is.