Pet Sematary (2019) is the worst movie of all time 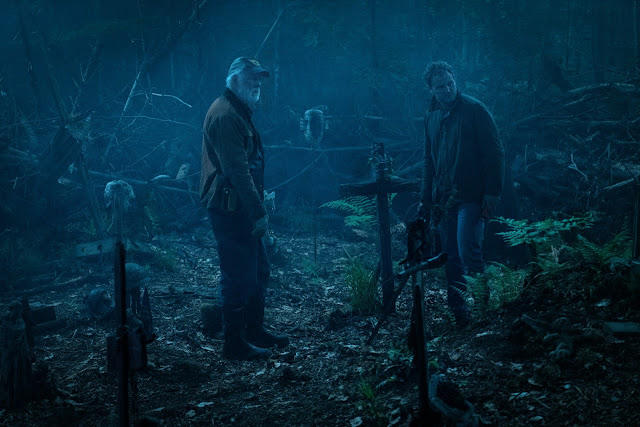 Pet Sematary. Baaaaad. Such a disappoint. Stephen King got me into reading. There for a while it wasn't cool to like King but I never went through that phase. Might have hidden his books under something more highbrow but I still read them. With the exception of William Shakespeare and maybe Paul Auster, I've read more of his works than anyone else. This is partly because he is so prolific. But I legit have enjoyed almost all of the books of his I've read. This book was a little dark but had its moments and was easy to blow through. This movie, on the other hand, was tough. Not because it was disturbing. Because it was shit. Though it was occasionally unintentionally hilarious.

Rotten Tomato Consensus: Pet Sematary takes its source material in a few different directions, but this remake feels like an exhuming almost as often as it does a revival.

Saw this on opening night. This was a while ago. Obviously. Packed theater. I'm hating this movie. Get to the end. That's my MO after awhile. Almost there at this point. The girl, Ellie, is back from dead. Jud is dead. Mom, Rachel Creed, is getting stabbed to death by the girl in the upstairs of the house. She heroically tosses her baby, Gage, down out the window to the husband, Louise, outside by the car. He catches the baby. Meanwhile, wife is fighting for her life with their undead daughter. So, you know, time is of the essence and what have you. Gotta take the baby somewhere safe, I guess, so off to the car they go. Now you would think that he would lock the door and be off but no. Here he starts telling the baby that he is locking the door and not to unlock the door for anyone except him. He then proceeds to name all of the people he shouldn't open the door for. He is like, "don't unlock the door for your sister, Ellie, mommy, Jud Crandall, your grandma, gramps, aunt Zelda, Victor Pascal, the cat Church," and so forth. I couldn't stop laughing. I haven't laughed like that in years. We are talking like hysterical, belly laughing for over a minute. I mean, I could not stop. I was the only person in the packed theater that had this reaction. People were getting pissed. The guy next to me, whom I didn't know, didn't get it and said something like "that was a good kid, staying where he was told." I guess he was, man. He was obviously not self-actualized.

That is more or less all you need to know about this movie I'll give you a little bit more. The wendigo stuff was cool. But not as cool as the book though it never really is. They flesh that stuff out a little bit which everyone was hype about and indeed was interesting. The movie looks cool. Everything is all dark and New Englandy lighting wise in a way that doesn't really happen in the Midwest. It's a hard to explain aura. You have to have spent some time in Maine in the fall to experience it. Good to see Amy Seimetz, the mom, Rachel Creed, in like real main stream flicks. She was also in Alien: Covenant. Before then she was in a bunch of cool, independent horror, stuff like You're Next and Ti West movies. She was really great and probably won the movie. Though one could make a case for Jason Clarke, the dad, Louise Creed, who is solid as well. Was sort of excited to see John Lithgow in as Jud Crandall as he is usually pretty good. But this role didn't do anything for me.

The movie, on the whole, is just dumb. The changes from the book/the first movie were pretty shitty. Made the movie darker which is was pretty unnecessary and pointless (though the twist fucking got me). Much like the original 1989 movie staring Dale Midkiff as Louise, Fred Gwynne (Herman Munster) as Jud, and the lovely Denise Crosby, one of my first onscreen crushes as a child, who played Tasha Yar in Star Trek: The Next Generation, meow, I shan't ever be watching this one again. Trash.