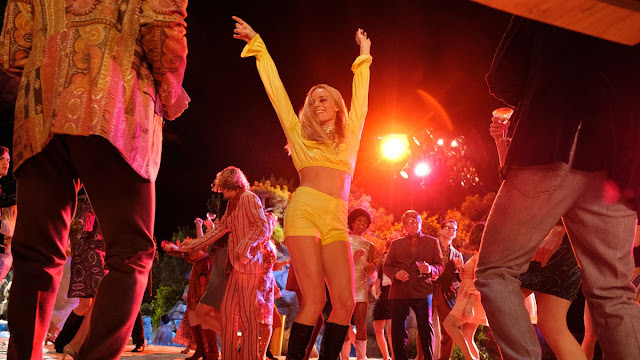 Once Upon A Time In... Hollywood. Oh my fucking gawd ya'll. Two lines from the movie sum up my reactions to the movie, "That was the best acting I've ever seen in my whole life" and "You're real, right?" Or something like that. Sort of Tarantino's way of telling you what he thinks about the film. Like when Aldo at the end of Inglourious Bastards says, "I think this just might be my masterpiece." At least the first one, any way. Lot of chicken mole, amigos. Rotten Tomato score is 85% Fresh. This is a travesty. In no frame of mind to definitively say this, but after one viewing, it is my favorite Taratino movie. At least on this night.

Rotten Tomato Consensus: Thrillingly unrestrained yet solidly crafted, Once Upon a Time in Hollywood tempers Tarantino's provocative impulses with the clarity of a mature filmmaker's vision. 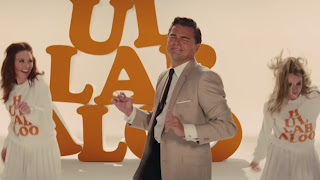 Gist of the movie is that a "has been" actor (who lives next door to Sharon Tate), one Rick Dalton played by Leonardo DiCaprio, and his stunt double, Cliff Booth played by Brad Pitt, who is more than a brother and not quite a wife go about and hang around, doing their things in L.A. in 1969, building up to the violence that you know is coming at the hands of the Manson Family. The trailer makes it look like a Manson flick mostly dealing with the murder of Sharon Tate, played wonderfully by Margot Robbie, but it is really a buddy hangout movie. Great one at that. Minimal violence for a Tarantino movie and then we get what we were waiting for.

The Tate family, notably sister Debra, was originally pissed that Tarantino and company were making this movie that they planned on being released on the 50th anniversary of Sharon and company's murder. Then the director met with her and she gave the film her blessing. Now she come down firmly in Tarantino's defense, saying that the movie made her cry and how touched she was by Robbie's performance. She has even gone as far to say that she wished he would make a movie completely dedicated to her and what not. So really came around on that one. After seeing, you can totally see why. 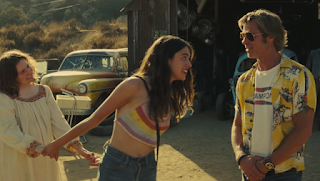 Some of the bullet points. Leo and Pitt. These two together are the perfect duo and their performances are amazing. They should both be nominated for Best Actor.

First, Pitt. Cliff is one of the great Tarantino characters. Little bit of Aldo in him from GB. Also some shades of Rusty Ryan and Tyler Durden. He and Tarantino both independently saw the character as a Billy Jack type which he totes is. If you haven't seen that, it is basically about an extremely masculine but cool dude who can kick some fucking ass. We find out maybe halfway through the movie that he has done some shit that makes him a bastard. But he is such a great dude otherwise and is so fucking cool, you don't care. A personal fave scene with him is the one where he ends up at the Spahn Ranch, taking one Pussycat back to her people. It is tense as fuck as Manson Family members come out of the woodwork and ominously stare him down. You feel that he is in real danger and there are red flags popping up everywhere but he is a coffin nail, this guy. When he kicks the shit out of Steve "Clem" Grogan for slashing his tire, this is the guy who in real life was recommended to die after the Manson Family trial but then sentenced to life (he would get out on parole in 1985, incredibly) because as Judge James Kolts said during the sentencing, "Grogan was too stupid and too hopped on drugs to decide anything on his own," for slashing his tires when one of the hippy chicks runs off to get Tex Watson (the kid that plays Tex is one Austin Butler who was also in The Dead Don't Die whom I had never seen before a month ago and is now everywhere) who hauls ass back to the scene. The way he moves and the crazed look he has about him, you know shit was really about to go down. Plus, all this echos what happened to the real life stuntman Donald Shea at the hands of the MF. Shea was checking on George Spahn just as Cliff does in the film and calls the police on them. After the cops raided the ranch, Manson and company murdered the guy, burying his body near the property. Anyway, yeah, if you know about this shit it is even more ominous and you are even more freaked out. Also, him being a guy who never was in shit sort of follows an alternative path for the actor. Like if he was just a guy who played little roles like the one he had in True Romance. 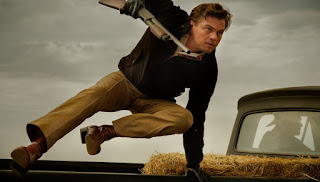 Now Leo. Dude wins the film. Pitt was fucking sick. It is almost unbelievable, these two together, acting the shit out of this movie. A cool ass actor doing good ass work. That's Leo and his character, Rick fucking Dalton, in the film. Best when is sort of losing his shit. His is career is basically over with the arrival of New Hollywood (also called the "American New Wave") ushered in in 1967 with Bonnie and Clyde. No more Rick Dalton as a leading man, he is now relegated to television, playing a big that gets his ass kicked by the next big thing that comes along. The show that his character is acting in with the movie, Lancer, was a real show that ran from 1968-70. In the movie Lancer looks amazing.  I tried to watch an episode, "Blue Skies for Willie Sharpe," and it was fucking terrible. Production wise it was like watching someones home movie or something. I was expecting Howard Hawks. I think it was Tarantino joke. Having Dalton telling himself in the mirror that if he doesn't get his lines right, he was going to go home and blow his brains out, taking this shit so goddamned seriously for a show that was meh. That's his best scene in the movie. Might be saying it is a job and this guy fucking takes it seriously. In any case, love all the acting stuff with character. This is where he really shines, Leo that is. So many layers there. Pretending to be a good actor doing a shitty job and then freaking out. Then acting as this guy acting and fucking killing it. It was mind blowing how good that stuff was. So much so that they address it in the film. 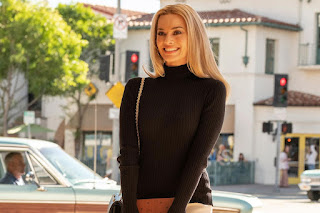 Finally, there is Robbie as Tate. Her portrayal is so bubbly and likable, you feel protective of her. She is almost larger than life at first. Hanging out with Mama Cass and Michelle Phillips at the Playboy Mansion. Driving around LA with Roman Polanski. She is New Hollywood and very cool. But then were see her out and about. Stopping at a theater to watch a movie that she is in. No one knows her. It is sort of humbling but she is just excited to be there and hear people's reactions to her work. She isn't famous at this point, but this isn't something she seems to really care about. More just happy to be a part of it. She doesn't say a lot but she does such a good job and it is all done so delicately, you really get a sense of who she is and what she was like. You want her to live and you think of what she could have become. It feels like this is a woman picked for stardom for a new era, she just hasn't gotten there yet. Plus, Robbie is so pretty and that 1969 look is good for her. I don't mean to objectify her because she is so talented. But she is like painfully beautiful in this movie. Some critics have made a big deal of her character's lack of lines and shit. This is bullshit and sort of demeans her performance. She doesn't need to say a lot to knock it out of the park, which she does. 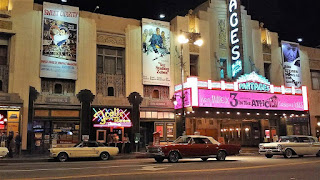 Some other things that really stand out include the cool as shit 1960s world that Tarantino builds, (getting into spoilerish territory here) the crazy ass ending, and the fucking insane cast. Not sure there has ever been a cast like this. There are three above. Fucking sick, right? Then there are the other people that kill in the couple of minutes where they are on screen. Folks that play historical figures like Bruce Dern as George Spahn, Emile Hirsch as Jay Sebring, and Damian Lewis as Steve McQueen. Random industry people some of which are real and others not like Zoë Bell and Kurt Russell play a stunt coordinating couple, Nicholas Hammond as Sam Wanamaker, Timothy Olyphant of the TV western Lancer James Stacy, and Al Pacino as a film producer. Various recognizable faces in the Manson clan, like Butler as Tex, Lena Dunham, Dakota Fanning as the notorious Squeaky Fromme, Danielle Harris from Halloween 4: The Return of Michael Myers and Halloween 5: The Revenge of Michael Myers, and Margaret Qualley was sort of the biggest standout from the Family as Pussycat. A few kids of famous people like Kevin Smith's daughter Harley Quinn Smith (still sour on him after he was an asshole at a comedy club appearance in town) who was a random Manson Girl--whom I found out is a vegan, so totally in my cool book--and Rumer Willis, the spawn of Demi Moore and Bruce Willis, who played Joanna Pettet. A couple of 1990s people that were tapped for stardom that never came, in this camp were Rebecca Gayheart (Urban Legends star/Noxzema Girl from the 1990s) as the wife Cliff kills and Luke Perry as Wayne Maunder who shows up as an actor on Lancer. Then there are a lot of people that would maybe get second billing in a lesser movie, guys like Clifton Collins Jr. and Michael Madsen and James Remar, for example, that are basically just extras in this flick. Hell, even Clu Gulager makes a cameo as the bookstore owner. 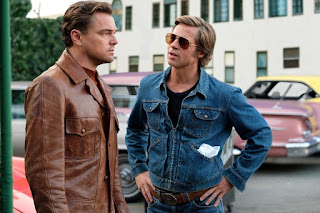 Also, Tarantino doesn't seem to like Bruce Lee (portrayed in the film by one  Mike Moh). The character is sort of a prick and overall looks ridiculous. Plus, Pitt's character makes him look like a loudmouth who can't really even fight. That is a fantastic scene by the way. Everyone in the theater I watched it with was losing their minds when Lee challenges Cliff to a fight and has a random guy hold his jacket and the guy tells him that Cliff has a rep for being crazy. "What did he do?" "Killed his wife and got away with it." Lee looks at him like WTF. Fucking great. Apparently, Lee's surviving family is pissed.

A personal aside I think is relevant on how good I felt the movie was. So I am definitively an ex smoker. However, I allow myself one a year which I've not partaken in for some time. So, yeah, great Tarantino movie, second to last, supposedly. So I had my first cigarette since 2013 to commemorate it. I smoked about half of it and tried to really enjoy it which I sort of did. Could go for one of those acid dipped ones though. That I'll tell you.

Oh, yeah. A touch I liked is the poster over Dalton's TV of him in a movie with Suzanne Pleshette from The Birds.