Midsommar is the great movie of all time

Midsommar. I loved this movie. Definitely my favorite of the year. Probably my favorite film for the last several years. Totally my type of flick; it is really a beautiful film. Like it way more than Ari Aster's previous film, which is more or beloved, Hereditary.  I wasn't that crazy about it. Saw Midsommar on psychedelics (which I knew factored in heavily going in). After the opening, almost left 15 minutes in, I thought this was a huge mistake, almost left 15 minutes in, but I was glad I took the plunge once they got to Sweden. All of that was visually beautiful. Plus it put me in the right mainframe to really get this movie, I think. Has gotten mixed reviews but if you go in with the right mindset, totally an experience.

Rotten Tomato Consensus: Ambitious, impressively crafted, and above all unsettling, Midsommar further proves writer-director Ari Aster is a horror auteur to be reckoned with. 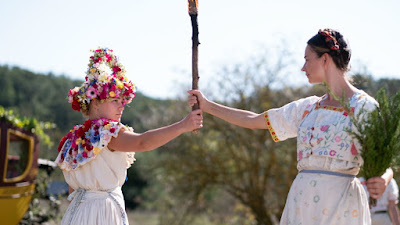 Gist of the film is that a group of grad students tag along with one of their classmates to the commune  (which ends up being run by a pagan cult) where he is from in Sweden for their annual Midsommar festival. Only this is a special one that only happens once every 90 years and involves ritual sacrifice. Has its roots in The Wickerman and Cannibal Holocaust. One of the students has a girl friend that he reluctantly invites after she suffers a horrific loss that most of the dudes, including her boyfriend, sees as a huge drag. The only one among them that isn't a complete piece of shit to her is the Swedish native, Pelle (Vilhelm Blomgren). Beyond this setup, the couple, Christian (played by one Jack Reynor) and Dani (played by Florence Pugh who is really great and wins the movie), their relationship, it deteriorating. In this aspect, director Ari Aster, sites the Albert Brooks film Modern Romance, which I've never seen, about "a successful film editor with far too many issues that affects the relationship between him and his remarkably patient girlfriend" as a direct influence. Only actor I have ever seen before is William Jackson Harper, who is Chidi from The Good Place, who plays the most ambitious/driven of the grad students, Josh.

So lets just throw this out there. There is this suicide at the beginning where Dani's sister kills herself and murders her parents. She cryptically tells Dani in a text that she is going to do this. It's something like "I'm done. Mom and dad are coming, too. Goodbye." Her dick boyfriend tells her to stop giving in to her sister's attention seeking behavior. He then talks shit about her to his buddies, basically saying that he is finally going to break up with her. You know all you need to know about him at this point of the movie but he just keeps getting worse. Next thing you know she calls him just screaming. The sister indeed killed herself by taping a hose attached to the exhaust of a car to her mouth and murdered the parents by pumping the gas into their bedroom. We see the cops dealing with it, corpses and all. It is truly horrific. In my altered state, I almost had to leave. There is also, spoiler, a pair of suicides when they get to festival. All this is obviously the last thing you want to see when tripping but the characters, at that point, have several days of psychedelics in their systems. 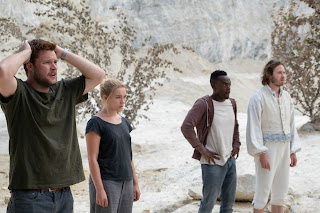 Going to throw out a spoiler warning for the rest of this review. Ok. The movie scores high marks in the dipshit dudes ignoring huge red flags department. For these dudes, the movie is straight up horror. Don't feel so bad about them dying, honestly, though in my youth I could see myself as potentially among them although I was always a pretty good, respectful dude. But this sort of got me asking the unanswerable question of if they had followed the rules or whatever, would they still have died? They sacrifice non in all. Four new bloods. Four of their own. One to be chosen by the May Queen. All of the natives died voluntarily and it would appear, by breaking the established rules, so did the new bloods. It is unclear if they would have survived if they hadn't been dicks but I guess not. Would they have just chosen their own if that was the case? Another unanswerable is if they do this every year or this is part of that once every 90 years stuff the master of ceremonies was talking about. Seems like they would blow through their ranks pretty quickly if they are offing at least four of their own every single year or whatever.

Midsommar kinda of feels like it's maybe in the same universe as Cabin in the Woods. You've got Will Poulter, who plays Mark, as the fool who wears a jester hat in the burning at the end (he and all but three of them are dead by that point). The scholar in Chidi. You have sort of the harlot or whatever with the English chick who went on a date with Pelle's brother before meeting her fiancé, which might be a stretch. Sort of the alpha male Christian who is chosen by the May Queen, his girl friend Dani, to wear the bear carcass (he takes on the beast persona and he was just all virile and what not). Not exactly sure what the fuck the fiancé is other than an arrogant Westerner prick. I guess he was just extra. Oh, and they keep captive and kill a bear. Fuck that shit. For this I can't be a part of this community. 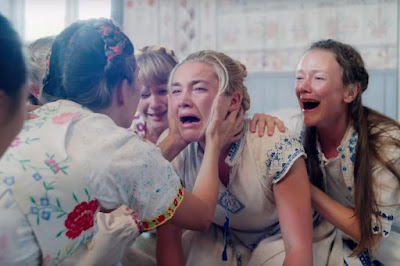 A bit on more on Christian. Dude fucking sucks. Not only is he the worst boyfriend of all-time, he is also a shitty friend. After the ritual suicide on the second day, Christian tells Josh that he is going to write his thesis on this place. Josh, Chidi, is like "fuck you, man, that is bullshit and lazy, you knew I was going to do this." But Christian feels no goddamn shame. Academic fraud, this piece of trash. After being just terrible through the whole movie, he ends up boning this young red-haired girl in this fucking insane ritual in what is likely the craziest movie sex of all time. It involves the dudes in the village sort of egging him on at the start of it and then like 10 or so older ladies standing around the chick trying to get pregnant whilst experiencing vicariously all of her pleasure and what not. Some of them even kind of join in with what I assume is her mom holding her hand and what not and some old lady pushing on his butt and shit. Dani looks through a key hole in the door and sees this going down. She freaks out, understandably, screaming and what not. The other girls that are following her around as the May Queen or whatever, which she won in a psychedelic fueled dance competition, scream with her in her pain, lightening her load. Empaths, all of them, in this commune. Anyway, after Christian cums, he immediately freaks out and runs the fuck out of there, naked, penis flopping, hiding in the chicken coupe with Simon who is technically alive, we see, as his lungs, which are out of his body like wings, hard to describe, filling up with air and shit. Finally figures it out, this fucking moron.

It is there that he is further drugged with some neurotoxin that won't allow him to move. This is where we learn that Dani, as the May Queen, must choose who is to be the ninth sacrifice: Christian or some dude chosen at random. She goes with Christian. She needed to choose him to let that shit go and move on with her life. Also, the choice symbolizes her leaving behind American society which has brought her nothing but pain and entry into the group, her new family. For her the movie is wish fulfillment. She has a family again and she has rid herself of her traumatic and relationship baggage. This is truely total transformative experience. How every psychedelic trip should be.

As you can see, a lot going on in this movie. Haven't even touched on the runes or the paintings and what not. Haven't thought about a film this much in a long time. Highly recommend.