L.A. Confidential is the greatest movie of all time

L.A. Confidential. Love a period neo-noir flick. This one is one of the best. Up there with Chinatown and The Big Lebowski. Watch this shit once a year(ish). That Kim Basinger is quite a looker. She is a classical beauty, this film well establishes. The soundtrack is killer. LA in the 1950s looks like the shit, even with the crime. Everything about this movie is fucking sick. A perfect goddamned movie.

Oh, cops. They all, like 90% of them, fucking suck. This movie, and like 400 others I've seen, and the news media and my personal experience (luckily I've got white male magic going for me) and anecdotal experience have led me to this position. This movie sure as shit hammers it home. In the end, they are all corrupt. Even the incorruptible. Isn't that right ole buddy boy? It is. 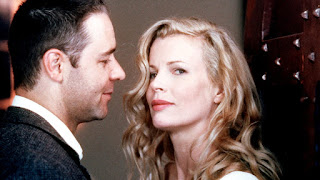 This movie is also one of the best examples of historical fiction that I can think of. Ellroy sort of went off the rails with The Black Dahlia from 2006 but then one was spot on. Atmospheric. Cool. Would have won a shit ton of Academy Awards but was up against Titanic in 1997 and that won nearly everything. Near. Far. And so forth. Though Basinger won Best Actress and somebody won a writing award.

Following three very different police offers in the unpopular straight shooter Ed Exley played by Guy Pearce, cool guy Jack Vincennes played by rapist Kevin Spacey, and thug Bud White played by Russell Crowe who reluctantly sort of join up to investigate a murder within the historically corrupt-ass LAPD. This made all of these guys stars though Spacey was well knownish for The Usual Suspects. Crowe easily wins the movie. He became an A-lister after this performance. But don't sleep on Pearce or Spacey. They are both great as well. Also get solid performances out of James Cromwell who is the Daryl Gates prototype and the spitting image of my grandpa and Danny DeVito who is the spitting image of my female companion's dad.

Bunch of Hollywood in the 1950s stuff in here which is cool. Basinger's character, Lynn Bracken, is a Veronica Lake, the star of Sullivan's Travels, which keeps coming up, lookalike call-girl. The plot revolves around this prostitution ring of girls that look like celebs. This leads Exley to mistake the real Lana Turner for one made to look like her because of the company she keeps, a real-life thug named Johnny Stompanato. Some interesting Hollywood crime shit going on here. This asshole Stompanato was a bad dude. He beat Turner, escalating to the point where her daughter, Cheryl Crane, stabbed the gangster to death in 1958. Yeah, piece of shit. The type of guy that Bud White hates and at one ridiculous point in the film, White grabs Stompanato by the balls, literally, which was one of the dumbest, most unbelievable things in the film. He basically makes Stompanato his bitch. No way this dude gets away with that shit. Cop or not.