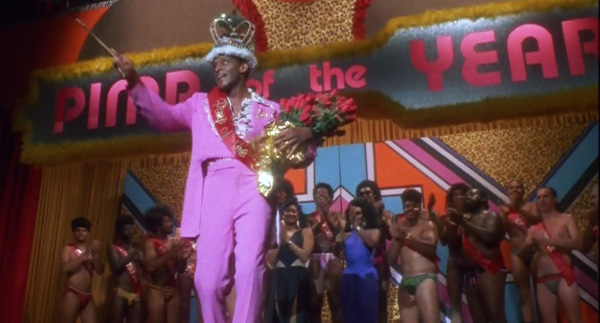 I'm Gonna Git You Sucka. Man oh man. Remembered this being like the funniest movie of all time in when I saw it in 1990. Also remembered it surprisingly well but was thinking that there was no way it was going to live up to what my memory of it was. Shit, main, this was every bit as funny as it was when I was eight. Funny shit, I tell you. The same shit that was funny to me 30 years ago. Yeah, that shit is still funny. That is the lesson here. Totally revisit your favorite things from childhood. They totally hold up, I'm sure. 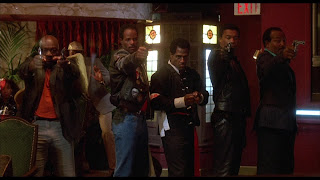 Gist of the movie is that Jack Spade, played by Keenen Ivory Wayans, investigates the OG, over gold (as in wearing too much gold), death of his bro with the help of neighborhood hero John Slade, played by one Bernie Casey, and his crime-fighting buddies which include Jim Brown and Isaac Hayes. The movie is a total Naked Gun esque spoof of blaxploitation films from the 1970s.

Some many great scenes that had me going. There was Isaac Hayes strapping on like 50 guns, saying "you can never have too many," and then falling and them all going off. Still funny. The chick that wants "12 inches" from Spade who later confesses that he ain't got nearly that much and she makes some confessions of her own. And, my personal favorite, the militant black dude, played by Clarence Williams III whom you might know as the undertaker in Tales from the Hood, who is married to the blonde haired, blue eyed actress who was Jan Brady, Eve Plumb, raising her kids, one is Ariana Richards aka the teenage girl from Jurassic Park, when the boy decides to read him his report on Abraham Lincoln. "Abraham Lincoln was born in a log cabin in Illinois. This po’ white trash went on to become President of the United States. Once in office, this white capitalist swine manipulated the freedom of the black man for his own political career. Then another piece of po’ white trash shot him in the head. The End."

A+. The way he says "po’ white trash" is what really make it. "Then another piece of po’ white trash shot him in the head," is the best line of this and maybe any movie. Also when his sister interjects, "preach, brotha!"

Hard to say who wins this movie. Probably star Keenen Ivory Wayans as Jack Spade. Or maybe Bernie Case as his maybe dad John Slade. Damon Wayans is alright, too, as a henchman. Most memorable heat check though is Chris Rock who comes in asking a BBQ restaurant owner "how much for one rib?"  And Clu Gulager makes a cameo. He is this absurd actor who shows up in a bunch of my type of movies like Return of the Living Dead and A Nightmare on Elm Street 2: Freddy's Revenge (more like Montezuma's Revenge, amiright?).