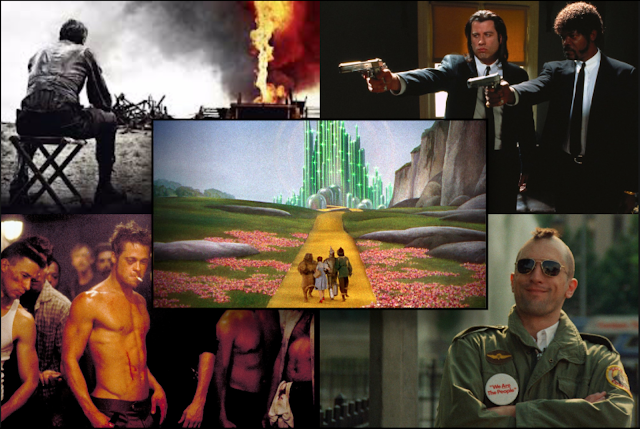 These are the movies I'm going to be watching for Hollywood's greatest years. Five years. Ten movies from each year. A few extras by request. Look forward to these in the coming months.

Some notes on the lists. I made sure to have the Academy Award Winner for Best Picture, a comedy, a horror movie, a kids(ish) movie, and a sports movie. If a big name director had a movie that year, I included it even if it wasn't a great flick (Bringing Out the Dead [Martin Scorsese] and Death Proof  [Quinton Tarantino] for example). There are several notable exceptions to this rule (Ghost Dog [Jim Jarmusch] and The Straight Story [David Lynch] in 1999). Otherwise, just picked better films from that year I want to watch and write about.

Gone with the Wind, Mr. Smith Goes to Washington, Ninotchka, Stagecoach, The Arsenal Stadium Mystery, The Cat and the Canary, The Hound of the Baskervilles, The Roaring Twenties, The Wizard of Oz, and Young Mr. Lincoln

Above the Rim, Cemetery Man, Forest Gump, In the Mouth of Madness, Interview with the Vampire, Leon: The Professional, Pulp Fiction, Reality Bites, Speed, and The Shawshank Redemption

Death Proof, Hot Fuzz, Juno, No Country For Old Men, Ratatouille, Superbad, Talladega Nights, The Assassination of Jesse James, There Will Be Blood, and Zodiac

Missing the cut: 3:10 to Yuma, Atonement, Distubia, Eastern Promises, Gone Baby Gone, Knocked Up, I'm Not There, Into the Wild, Mr. Brooks, and The Simpsons Movie

Also, may end up revisiting some of those flicks in years with a bunch of films that didn't quite make the cut. Just gonna focus on these for now though. But feel free to make suggestions. Thanks for everyone that suggested a film.