Destry Rides Again is the greatest movie of all time 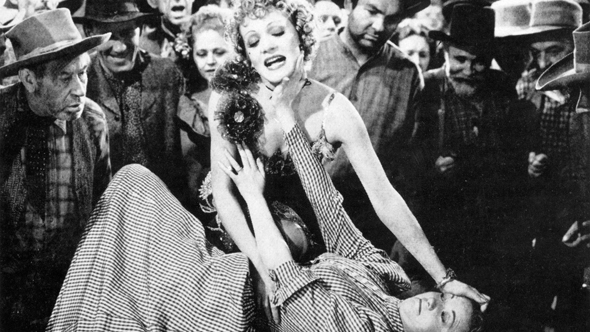 Destry Rides Again. Great flick. Audited a class at IU on the year 1939 in cinema, in the professor's informed opinion, the great year in film. This was my favorite of the films that we discussed. Western that is super fun and funny with iconic performers yucking it the fuck up. Also has two incredible scenes and has Marlene Dietrich as Frenchy, belting out some inspired tunes in her role as the saloon singer. The film is the obvious inspiration for Blazing Saddles with Frenchy as basically the same character as Lili von Shtüpp in that much more well known flick. 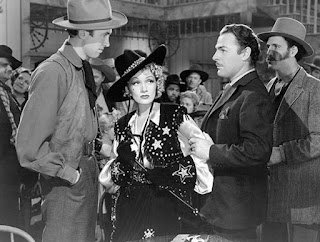 I fucking love Marlene Dietrich in this movie and she easily wins the movie. She was a fucking rocking chick. There is a podcast I listen to that goes into Dietrich during the WWII years that I highly recommend called You Must Remember This, which is just phenomenal. From Germany, she defected in the 1930s after the Nazi's came to power. She was a huge star by that point and after a few years of American films under her belt, Nazi Party approached her with an offer of becoming the top German film star of the Third Reich if she came back to Germany but she refused and applied for U.S. citizenship in 1937, eventually working to raise money with Austria-Hungary born Jewish filmmaker Billy Wilder (among others) to help Jews escape from Germany and did a couple of USO tours during the war. In her late 30s when this film was made, Dietrich bragged about all the younger Hollywood dudes she banged going into her 70s. Among the men she boned were Yul Brynner, Kirk Douglas, Errol Flynn, Joe Kennedy, John F. Kennedy, George Bernard Shaw, Frank Sinatra, and John Wayne, among many others. Also Jimmy Stewart who seems like sort of a dick. He knocked her up whilst filming this movie. She told him and he said something like, "well, golly, what are you going to do?" She said something about "we" can do this or that and he replied, "well, what are you going to do?" Dickhead. And she was bisexual and sort of a leader in the gay Hollywood scene and frequented the legendary drag balls of Berlin in the 1920s. She called her underground, closeted lesbian clan her "sewing circle." She knew how to live, this one. 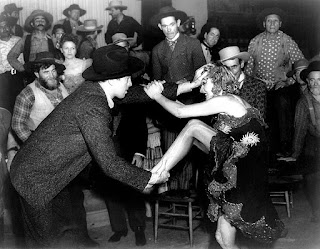 In Destry, Dietrich beats the literal pants off a guy and then when his wife shows up, played by the actress Una Merkel, the two get into a tussle that is just fucking incredible. After minutes of cat-fighting, Destry, Stewart, the new deputy cleaning up the town, dumps soapy water on the pair which enrages her more and turns her wrath toward Destry. He tries to wait on her to tire herself out after minutes of throwing shit at him, but she just keeps on going, chasing everyone out of the saloon.

Movie has one of the best setups I can recall. The outlaw saloon owner Kent, played by one Brian Donlevy, kills the sheriff and then has the mayor in his pocket appoint the town drunk, Washington Dimsdale who is played by a guy named Charles Winninger, as the new sheriff. Everyone laughs their fucking asses off when he says he is going to quit drinking and clean up the town but he does what he says he'll do, wasted as he seems to be at that moment in time, bringing in Stewart's character, the son of legendary law man Destry.

Can't say enough about this flick. All around great with a fantastic and epic ending with all the women in the town taking up garden tools and kitchen utensils, marching down to the saloon, and kicking ass all over the place. It is phenomenal.