Adventures in Babysitting is the greatest movie of all time 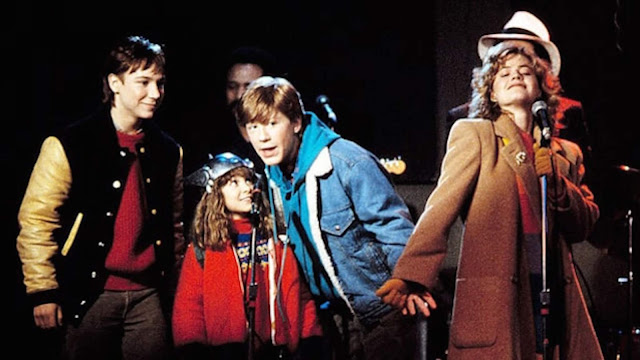 Adventures in Babysitting. I've got the babysitting blues. Love this film that I was shocked to learn was not a John Hughes movie. Was indeed the first movie directed by Chris Columbus (who previously wrote Gremlins, The Goonies, and Young Sherlock Holmes all movies I love) who would go on to direct Home Alone which was written by Hughes. I mean, it is the light 1980s babysitting movie about high school kids in the suburbs of Chicago not directed or written by John Hughes. It is all very confusing. But a great movie that I remember fondly. Columbus, by the way, would go on to direct the first two Harry Potter films. Pretty safe to say he wins the movie as this flick really propels his career though after winning an infamous Golden Raspberry Award (a parody award) for Worst Picture for 2015's Pixels, everything has since sort of come to screeching halt. But that is none of our concern here.

Rotten Tomatoes Consensus: Sweet and spry, Adventures in Babysitting gets by on its amiable tone. 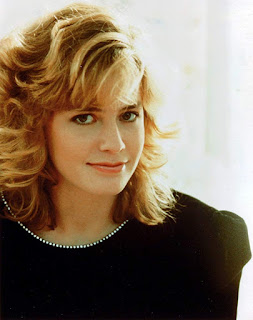 Gist of the movie is that senior in high school babysitter, played by Elizabeth Shue who is so pretty, has to pick up her friend Brenda, played by Penelope Ann Miller, who ran away from home, in downtown Chicago which is apparently the most dangerous place on earth. She has to take the kids along with her. Shit goes down.

Playing the kids are Keith Coogan who has the worst haircut of anyone I've ever seen and in the ninth grade is embarrassingly too old for a babysitter, little sister Maia Brewton, and Coogan's buddy played by Anthony Rapp. Shue's boyfriend is played by one Bradley Whitford whom you might remember from Billy Madison and The Cabin in the Woods. He is a fucking prick and an idiot. Other notable actors include a young Brett Kavenaugh who plays the dude Shue wants to get with at the University of Chicago (not really) and a young Vincent D'Onofrio plays Dawson, the garage/tow company owner who looks supposedly like Thor. 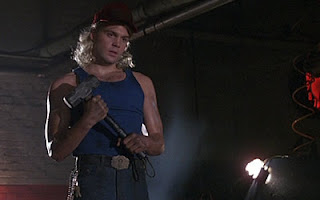 Some bullet points include the children witnessing five or six major crimes and nearly getting murdered. You see, Chicago in this universe is an all out hellscape. Much of the plot centers on the most popular Playboy of all-time and features a chick that looks a lot like Shue but is indeed not actually Shue. There is a scene where Shue and company go to an all-black blues club where everyone, including them, are forced to sing the blues before leaving. It is pretty racist. And a couple of rape jokes get thrown around which are always hilarious and appropriate for a children's movie. Like when Shue's character tells Rapp's character if he gives her any grief that she swears to god she will kill him. "Dead, murdered, stabbed," she says. "Raped?" Rapp's character says.

Speaking of Rapp and rape, you may recall an interview he did with BuzzFeed where he said not long before this movie came out, when he was 14, that a 26 year old Kevin Spacey of American Beauty and The Usual Suspects fame got drunk and tried to have sex with the child. Spacey tried to deflect by coming out of the closet (and, you know, implying a connection between being gay and sexually assaulting a minor) and making a bullshit apology but then 15 other people came forward accusing Spacey of similar fucked up shit. Because they really want your blood to boil, after a groping charge against Spacey was dropped last week after the accuser invoked the Fifth, I saw the disgusting headline "Comeback Kid! Kevin Spacey Ready For Return After Sex Assault Charges Dropped" on a fucking amoral clickbate website that you can Google if you really give a shit.