Toy Story 4 is the greatest movie of all time 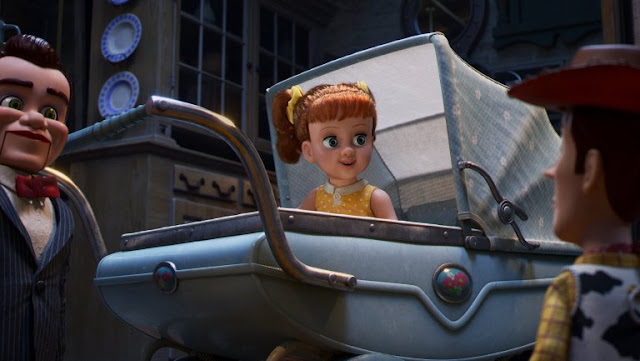 Toy Story 4. Pixar. Dope shit. Just as good as the other films in the franchise. Took me back to 8th grade. Watching this shit. Brought a tear to my eye once or twice and made me jump more than once with the creepy ventriloquist dolls popping up everywhere and trying to rip out voice boxes and all. 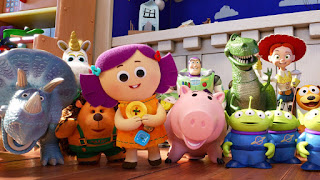 The band is still together. Bonnie is the new toy owner. Remarkably, the toys, they're all there. Given to this little kid in bulk. Only one that got away or whatevs was Bo Peep, voiced by Elaine from Ghostbusters, who is out in the world on her own, a lost toy, but she thriving. Living her best life and what not. She don't need no kid. I feel you, Bo. Anyway, this Bonnie has some separation issues when starting school. It's only orientation and all the other kids have been chums since the womb, I guess. But there she is. No friends to speak of. Wood (T.Hanks), who sneaks in to school with her by hopping into her backpack, tries to help by giving her a bunch of trash. With said trash, this Bonnie idiot makes herself a little friend and names it "Forky" because, you know, it's a spork and kids are sort of dumb. Stupid kids. This monstrosity comes to life and Woody takes it upon himself to protect it and what not. But trash is gonna trash and he, voiced by Tony Hale (Baby Buster from Arrested Development), keeps trying to litter himself and ends up on the highway.

Woody finds him and they head to the RV park that Bonnie and her fam are staying at when he sees Bo Peep's little nightlight that she and her three headed goat (Billy, Goat, Gruff) were a part of in an antique store. So Woody and Forky go into the shop and some creepy ass, possessed doll with a faulty voice box, Gabby, voiced by the bustalicious Christina Hendricks, and her army of demonic ventriloquist dummies led by this maniac Benson, see that Woody's intact box is just waiting to be ripped out of his insides and stuffed into ghoulish Gabby. When they fail, they end up taking Forky hostage. Woody then employs a bunch of vintage, abandoned toys, as well as a pair of stuffed carnival prizes that reunites Keegan-Michael Key and Jordan Peele literally as they are attached at the wrist, in taking back this goddamned abomination of a toy. 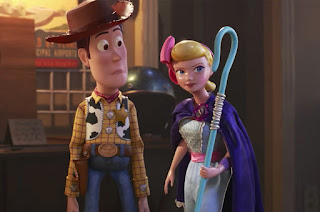 Best lines of the movie where surprisingly delivered by Forky. Sort of a dark horse in this category. He had a couple that were killer. Always cheery, one came when he was being held captive and what not by Gabby when henchman ventriloquist butler Benson sort of claps at him and he gleefully exclaims "he is terrifying!" The other, and the best in the movie, is when he is trying to convince Woody that he is not in fact a toy and is indeed trash. "I was meant for soup, salad, maybe chili. And then the trash!," he says before launching himself out of the window of the RV, exclaiming, "I'm litter!" with pure joy. 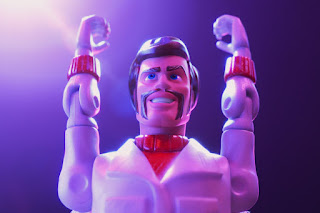 Hanks is fucking perfect in this role and totally wins the fucking movie. Maybe his best ever though I am pretty partial to Jimmy Dugan. So is Annie Potts as Bo and Hendricks is pretty great as well, displaying a convincing range in this flick. You go from hating her to totes empathizing and what not. Tim Allen as Buzz Lightyear is stellar. Also my favorite role for him. But Keanu goddamn Reeves steals the show, as he does, with as Canadian stuntman action figure Duke Caboom. From the trailer I was a bit worried about this guy as it looked irritating AF. But he is over the top in a good way as opposed to the annoying way he comes off in the preview.

Also, sort of got tired of writing so much about every flick and stopped doing it. Was doing a lot of writing magazine articles for my side hustle, cover letter writing, and company newsletter shits. It stopped being fun. But now I'm getting back into it. Going to try to keep these short and sweet. Just what I liked or didn't. A joke or two. Stuff that stuck out. Shit like that.