Murder Mystery is the greatest movie of all time 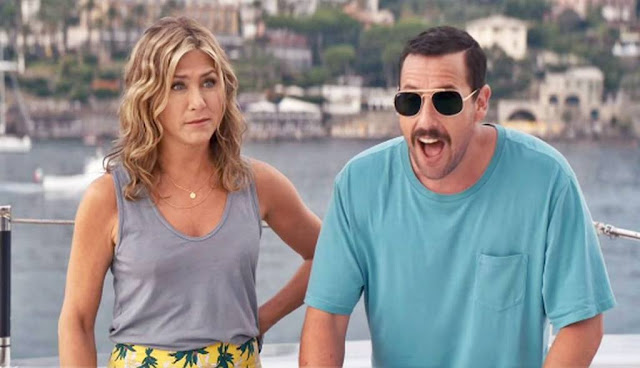 Murder Mystery.  Part of this whole Adam Sandler is cool again thing from Netflix. I like it and I dug the movie. Right in my wheelhouse. Love Agatha Christie. Love a whodunit that doesn't take itself seriously. Been on a big Adam Sandler kick. Totally my schtick. With that in mind, not too surprising that I would think that it was the greatest movie of all time... And here we are. Critics hated it for the most part but I enjoyed it even though Sandler's character was sort of schmuck and Aniston is finally starting to age, though she still looks great (if a little white trashy, which I assume was intentional).

The first 20 minutes of the movie are a depressing mess with Aniston and Sandler's characters, who are married, sort of getting into it because Sandler doesn't do anything and is like the stereotypical embarrassing lazy, generic romcom dude. They've been married for 15 years and he still hasn't taken her on their promised European honeymoon because he is not only lazy, he is also cheap... and a liar. He tells her has had a promotion to detective but he is really just a cop. All this is sad and dumb.

Also, there is a character that plays this Maharishi or some such shit, that uses his spirituality and status as a guru to get laid. There is a term for this in Hinduism I remember learning in Intro to Religion freshman year of college but can't recall it anymore. It's real bad when it comes to rebirth as this is super fucking low but obviously pretty fucking common. This character, played by one Adeel Akhtar who is in that canceled Fox show Ghosted and was one of the terrorists in the mockumentary Four Lions. This guy. Not sure if I fucking hate the shit out of this character or not. He has his moments when I do, that's for fucking sure, but overall, I think I don't know what to think. 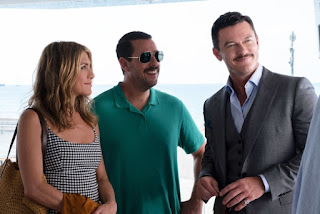 But then we get on the plane and Aniston meets some rich dude played by one Luke Evans--a handsome guy whom I only recognize from The Hobbit movies and was apparently in that new horror flick Ma which I haven't gotten around to seeing yet--when she sneaks into first class. He owns the airline or his uncle (Terence Stamp) does or something and befriends the two, inviting them to this shit show yacht trip with all these rich celebrities and shit that his dad is about to disown and announce he is leaving everything to his young wife who was once engaged to Evans. Right before signing his will, though, the lights go out and he gets got. Next thing we know people are dying all over the place.

The movie is at its best when Aniston and Sandler (I feel he wins the movie) ham it up as idiot Americans just along for the ride. They are ridiculously out of place for everything except the last 10 minutes of the movie. They dress like assholes, say dumb shit, and just look like classless idiots. Best with this is when Stamp's character goes through his relationship with all the people he is cutting off, saying shit like, "I gave you a career in film," "you saved my life in a suicide bombing assassination attempt 30 years ago," "you have led my race team to however many Formula One Championships," and so forth. When he sees them and is all, WTF are these idiots doing here. Evans character insists they stay, the rich dude is like, fine, I don't care, I do not care, you are all cut off. He, again, stabbed to death, and we get some solid physical humor with the general guy that saved him from assassination pulling out the knife. Sandler is like, probably want to leave that where it is, and he stabs it into the dead guy again. Hilarious.

I mean, the movie is what it is. If you liked shit like Woody Allen's Manhattan Murder Mystery, which I fucking love, then this is your fucking jam. Not into Murder on the Orient Express or And Then There Were None? First off, what the fuck, man? And second, you're not going to like this shit.