Hell Baby is the greatest movie of all time 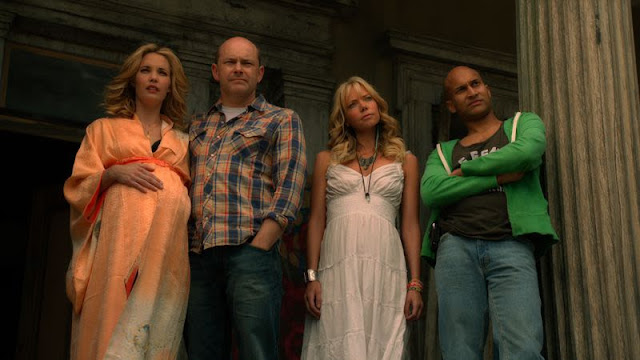 Hell Baby. Absurd. If you like movies like Scary Movie, then you will like this. About the same3 grade level. I mean, it's sort of dumb and isn't anything new... But the cast is great and it made me legit LOL. So that is something. Can't say that about too many movies. Plus, it got me crazy for a Po' Boy sammy and some of those good ass Zapp's Voodoo chips. It's my burfday and I went to the farmer's market and got all the things I needed for a breaded oyster mushroom variety and got the chips and looked about town for some Abita Amber which I couldn't find. Got the root beer instead. It's tits. And OMG y'all. This was a meal, let me tell you. This movie, which takes place in N'Olans, totally inspired this once a year (month) type of feast.

Rotten Tomato Consensus: Though its brand of immature comedy may appeal to some, Hell Baby misses the mark with much of its humor, rendering it a largely ineffective -- and often crass -- genre sendup.

Rotten Tomato has this flick at 31%. What the fuck is that shit? I mean, there is some dumb stuff. Like this naked old lady (a young dude in makeup) who is always trying to get sexy with Rob Corddry. Or that Keegan-Michael is just allowed to squat under the main couple's home. But this movie has more baby punching than every other film I've ever seen combined. You'll likely easily quadruple the amount of baby punching you've seen lifetime if you make it to the end of this glorious film. Greatest movie of all time.

Anyway. Yeah, cast is stellar. Corddry, Leslie Bibb whom you'll probably know from the first couple Iron Man movies or as the wife in Talladega Nights or Trick 'r Treat, Key from Key and Peele and MadTV fame, Riki Lindhome who is straight up naked for a solid (and pretty hilarious) minute, Rob Huebel who is totally a that guy, Paul Scheer who does like every podcast not a part of The Ringer that I listen to, Robert Ben Garant who was Junior from Reno 911!, Thomas Lennon (Dangle), the Michael Ian Black, and Kumail Nanjiani (the Pakistani dude from Silicon Valley) who is so goddamned funny in this and is so fucking hot right now. I'd watch pretty much anything with the Reno guys and IMB. All these people are funny as shit.

Favorite scene of the flick is after Corddry (the dad), Key as his squatting houseguest, his sister in-law (Lindhome, the blonde from Period Piece, and Nanjiani (who is just there in his capacity as the cable guy hooking up their internet connection) are doing a "Native American" blessing ritual of the house, basically just smoking a shit ton of weed, there is an earthquake that happens just inside the house, the demons don't like this apparently, and Nanjiani goes to leave. Everyone is all like, "are you okay to drive, man?" and delivers the best line of the flick, "well, I'm really high... so, we'll find out." He then gets in his work van and proceeds to drive off at a mile and a half an hour until he hits a neighbors trash can, knocks it over, and pushes it down the block. At some point he realizes there is something slowing him down, puts it in reverse, backs up two or three feet, and proceeds to drive into it again. Ah, high driving. The old "you'll get there eventually." Indeed, hilarious. ABs says "watch that shits".