Ghoulies is the worst movie of all time 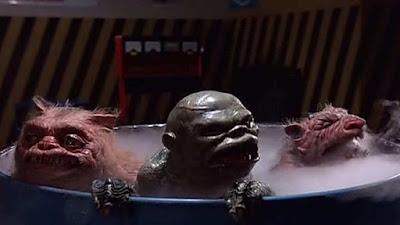 Ghoulies. Jesus. This movie fucking sucked. The only positive thing I have to say about it was that one of the ghoulies, the baby ghouly, of which there are at least three, looks like my dog Lucille. Sick abs and all.

What the fuck is going on in this movie is a mystery and extremely hard to follow. From watching it twice(fish), I've gathered that some evil man-child goes back to what is sort of his childhood home with a lady friend where he was almost sacrificed, has a bunch of friends over, and summons a bunch of demon things and medieval, satanic midgets that cause mischief. These folks either get possessed or killed by low budget monsters. Allllrighty then. 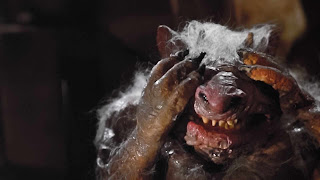 The movie is cut in such a way that I thought the main character and the guy necromancing were two different people. They weren't, I eventually found out. But you do get to see him shirtless. Which, mee-yow, this guy has the body of a 14 year-old and the face of someone in their mid 50s. He isn't some like marathon runner or anything, lest you get the wrong idea. He is tall, sort of muscular in a genetic never worked out way with no pecs, tiny nipples, and no body hair. A great look, for sure.

Only scene that is really worth watching is when the ghoulies crash the group's dinner party from the inside of the food, like one eats it's way out of the roast, while everyone just shoots the  shit and doesn't notice dick. That scene is like 10 seconds long. The rest of the movie is demon seances, there are bordering on double digits which the characters just sort of scream through for the most part, and masturbatory bullshit.

Did have a kill that was pretty fucking funny though. In this one one of the idiot frat bro type dudes in the movie walks into a room where he thinks someone he knows (I guess) is smoking a joint. This is all out of nowhere, mind you, and he says something like, "hey, don't bogart that joint!" as smoke sort of rises up around this figure with its back to us. It turns around and it's the two midgets stacked up with a cat ghoulie in his arms which he throws at the dude and it starts eating his face.

No good quotes. No good kills. No one won the movie. This was not a good flick. I could barely finish it. The sequels can't be any worse. Don't waste your time. I'm telling you, this is legit the worst of the worst.