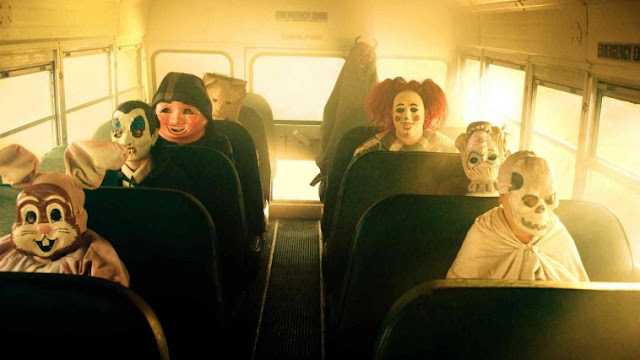 Trick 'r Treat. Catching up on a couple Halloween movies I didn't have the heart to write last week with being depressed about my dog's passing and all. Heart hasn't been in it, I guess you could say. So here is this, later than it should be. Night of the Demons 2 coming soon. So, yeah, Trick 'r Treat. Watch it every Halloween with a pumpkin beer in hand. This is sort of my It's a Wonderful Life. Winner of a bunch of niche genre awards, this beats out Creepshow and Tales from the Hood as the best anthology of all time, at least IMO. Is held in decently high esteem by critics, who generally aren't kind to horror, boasting an 83% fresh rating on Rotten Tomatoes when it was harder to get such things and has something of a cult status among genre enthusiasts. It's sort of a travesty that it didn't get a theatrical release which has been the stuff of mystery since its straight to DVD release in October of 2009. I bought this right when it came out without knowing anything about it and was completely blown away. You don't see a lot of new movies with big names which include an Academy Award winner, Anna Paquin, attached to them as well as such a well regarded producer/director in Bryan Singer (he's probably most known as the director of the good X-Men movies [in which Paquin played Rogue]) that get relegated to the bargain bin right off the bat. As such I've always been pretty curious about the film's history and why it took so long to come out and never actually hit theaters. Best I've heard is that it was supposed to come out October 2007 but distributer Warner Bros. pulled it with no explanation, sitting on it until it finally got the old we-don't-give-a-fuck-about-this-movie treatment. Speculation has that they didn't want to compete against the fucking garbage Saw IV and that this was sort of backlash from disappointing box office numbers from Superman Returns, a movie Singer produced (his production company Bad Hat Harry [a reference to Jaws] produced Trick 'r Treat), directed, and wrote with this film's director, Michael Dougherty, from the previous year. But here it is with a premier in my living room. This shit is a gem, though I'm not sure it would have actually made all that much money.  Regardless. Greatest movie of all time. 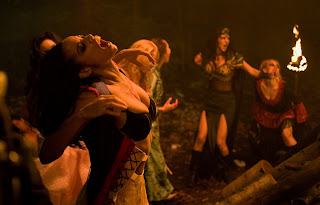 Pros: Probably the best Pulp Fiction type segmented movie that isn't Pulp Fiction. Each segment is about the perfect length. Even the weakest of them is solid and pays off later. Cast is a solid A with an  honest to god Oscar winner who is also a pretty lady. Has something for every type of horror aficionado. Looks great. Has great atmosphere. You can't watch this and not be stoked for Halloween. No shit, this is my go-to movie of the season.

Cons: Movie is basically perfect although the serial killer principal story is sort of weak.

Gist here is pretty straight forward. Spoilers below if you want to watch it. (I recommend reading this and watching it anyway).  We have five interwoven Halloween tales, so of told in a Pulp Fiction type style--a couple where the dude is a holiday fanatic and the wife not so much who is punished by this little pumpkin creature for taking down the decorations too early (which sort of serves as the intro for the movie and is by far the shortest skit), a werewolf (Paquin) making her first kill (they play it like she is a virgin who has decided to give into her friends' peer pressure and have her first fling), a serial killer school principal (who ends up being a werewolf entree later in the flick) who is raising his son in an unconventional manner, a group of kids who play a prank on a semi-autistic girl and are punished by the murdered zombies who were too once outcasts when they were students, and an old bastard who steals kids' candy (and we find out was paid to kill the outcasts who come back as zombies from the earlier skit) who has to fend off this miniature, pumpkin-headed monster/demon intruder--all taking place in a medium sized Ohio city known for it's holiday celebration. Present in all of these stories is this little pumpkin headed demon thing, which is pretty cute and looks sort of like my little doggy Lu, that enforces Halloween traditions. Those who break these made up norms suffer his wrath. 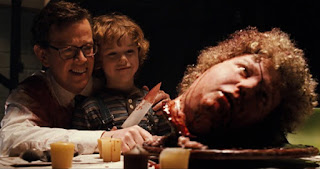 Staring in the film are Dylan Baker (he was the pedo in that movie Happiness that don't recommend anyone watch) as the serial killer, Leslie Bibb who was Ricky Bobby's wife in Talladega Nights, Brian Cox as the old man, some kids and other randos from Dead Like Me, Paquin as the werewoof, Thurman Murman as this kid who gets killed, and mostly unknowns. There has been talk for at least five years about a sequel but that shit ain't never gonna happen.

Best line of the movie was "Charlie Brown is an asshole." As a crazy Peanuts fanatic, I feel you kid. Snoopy is my guy. As a writerly sort, I identify as that little pup.

The best of the segments, IMO, is the one featuring the kids who go out collecting jack-o-lanterns for this ritual involving the dead special needs kids. They have to collect one for every kid that died and this will summon them or something. It all ends up being this mean spirited prank on this girl that the kids call "Rhonda the Retard" who seems to have a mild case of Asperger's where the others dress up like zombie kids and come after her after she descends to the bottom of the quarry via this lift thing. When they do this she goes nuts and falls and hits her head, crying somewhat hysterically. As she makes her way over to the lift, the zombie kids really do come to life. She then gets on the lift, locks the door, and goes up as her tormentors are ripped apart just below. Don't fuck with this chick (or any chick or kid for that matter).

Favorite kill and MVP both involve Brian Cox, the original Hannibal Lecter, among other things. We are sort of introduced to this character early on during the principal bit with Dylan Baker (who is also dope). He sort of creeps up on the principal as he is trying to shut up Thurman Murman whom he is burying in his back yard. We also, at one point, see him, Cox, yelling for help from his window and getting attacked. He obviously has some shit going on. Once we get to his bit, spoilers here by the by, we see this little demon kid, Sam whom is in all the skits, killing folk who break the Halloween rules and what not, who sets his sights on Cox for stealing kids candy. The way he does it is a pretty good gag, really, sort of subverting who gets the trick. He outfits his little doggy with a costume where all the kids see are these glowing eyes that make it look like a monster. So Sam comes to take his treat, basically. First he dongs and dashes him a couple of times, the last time planting a shit ton of jack-o-lanterns on his porch. Then, when he goes back in the house, Sam makes a bunch of noise and shit so that Cox knows someone is in there with him. At that point the dog runs up stairs, where the noise is coming from, we hear a yelp from the dog and then once Cox goes upstairs, "trick 'r treat" and various other incarnations of that are scrawled in blood on the walls. So it is implied that he kills the dog, which you know, hated it, but maybe not. I choose to think not. Anyway, the little Sam monster and Cox tussle for a while before finally Cox shoots it in the head with a shotgun. Instead of brain and shit blowing out the back of his cute little pumpkin monster head, we get pumpkin goo which is fucking cool. It doesn't actually kill Sam, we see as he comes back and attacks Cox before Cox finally gives him a piece of candy, saving his life. This reprieve, however, is short lived as we find out that Cox was the bus driver in the dead kids section. So when Cox goes and answers the door for the last time of the night, he is visited by the children that he murdered so many years before, ready to get their revenge. Fucking sick.

All of that is to say that Cox really sells the shit out of a scared old man with a life-long mean streak in him, not to mention justifiable paranoia. For this performance, he gets the MVP. Love that guy. And that was one of two of my Halloween movies this year. This one, of course, is an every year watch, much to my female companion's irritation. The other one, Night of the Demons 2, I'll get to soon.