Motel Hell is the worst movie of all time 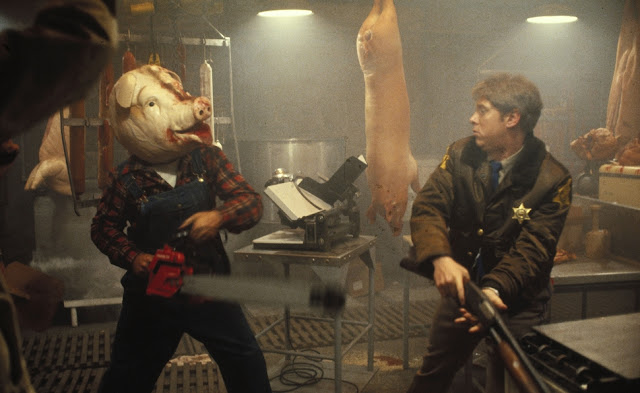 Motel Hell. For Thanksgiving I am starting this thing where I watch movies involving cannibalism. This is the first. In it we get a guy that sells human meat to the public who can't get enough. This happens in many of these types of movies. Like all of them, I imagine, there is this obligatory scene where the guy doing the killing and selling the meat is all like, "it's the quality of the meat! Everyone loves this meat! The best kinda meat there is. Everyone sure can't get enough of it! It's the meat!" Yeah, pretty sure I wouldn't eat whatever someone who talks like this is selling even when I did eat dead animals. But yeah, I couldn't imagine a movie I dislike more than this. It is in no way enjoyable. Horribly made with a nonsense story and is also very disturbing. A trifecta of shit. Worst movie of all time. (However, after some time, now that I am sitting down to write it and I'm thinking about it and all, I remember it being pretty funny).

Pros: Hell of a chainsaw dual. The way the killer gets it is pretty solid. Like that kids wander into the slaughterhouse and are forever mortified. More kids need to know how the sausage gets made.

Cons: Tone is way off for the subject matter. It is intentionally campy but also tries to be scary. It sometimes works, like with another movie that is basically this exact movie only better (The Texas Chainsaw Massacre 2), but not for me, not here. The plot hinges on the survivor chick being really stupid, basically. Can't believe this shit is Fresh on Rotten Tomatoes. 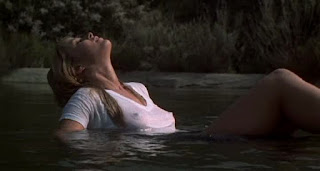 Gist of the film is Farmer Vincent's meat sticks drive everyone crazy with how delicious they are. People come far and wide to stay at his hotel and munch on his sausage. Everyone seems to think the world of him even though he kills animals for a living and freely talks about eating dog and shit. One day this chick and her biker boyfriend wreck near the farm (I think Vincent caused this but am not entirely sure). Well the biker either dies there or Vincent kills him, also unclear, and claims he buried him on his property. The girl comes to eventually and freaks. They bring in the sheriff, a relative of Vincent's who is also cool with eating dog but we find is unaware of the human entrees, is upset that Vincent didn't call him but explains to the chick that burring her boyfriend is indeed legal in that county. The next day Vincent goes and talks to this chick, giving her the most basic religion talk and because she is fucking stupid she is all, "I guess that makes sense," and decides to stay. From there she and the sheriff seem to sort of have something going on at first, he takes her to the drive-in while Vincent kidnaps people, severs their vocal cords, and buries them up to their necks in his garden. He then slaughters these folk and turns them into sausage. Dude is charming, I guess, in a "aw, shucks," sort of way, and, improbably, wins the heart of the much younger girl that he saved earlier. However, when the girl finds out that he is using long-pig as mystery meat she gets all revolted and his hotel/sausage empire comes crumbling down.

Directed by one Kevin Connor whom I've never heard of, it stars one Rory Calhoun whose name sounds familiar and face is def familiar (he has 126 acting credits but none of them are think I've seen before), the late Nancy Parsons who is most remembered as Balbricker from Porky's which I've never seen, Nina Axelrod is the reasonably attractive one, and Paul Linke is the sheriff. We also get small roles from John Ratzenberger who was Cliff Clavin in Cheers who plays one of the people that gets planted and turned into sausage, and Wolfman Jack who plays the role of Reverend Billy.

Ok. So first, let's discuss this dog eating bit. Great way to turn me off. Slaughtering animals, especially dog. During the picnic scene with the girl, his sister or whatever, and the sheriff, he talks about how grandma loved that dog and so forth and when she got sick told him to take care of it when it was barking. "And boy did I take care of it... She loved that dog but when I told her what I done, she still ate it and thought it was delicious." They all think this is fucking hilarious. What the fuck, man? "Meat's meat," he says. That it is. All fucking morally wrong, I say. They take the opposite approach. Most people live in a gray area. 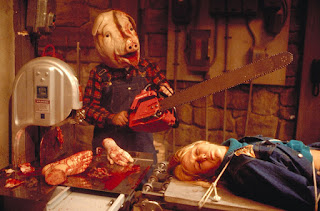 Anyway, best scene has to be the chainsaw dual, been seeing a lot of these lately (strangely). This is the big fight at the end. It features Calhoun wearing a pig head, which thankful looks fake as fuck, and him and his cop nephew really going at it. It's pretty impressive for this time and considering how old the dudes going at it are and all. Plus one is wearing a pig head. 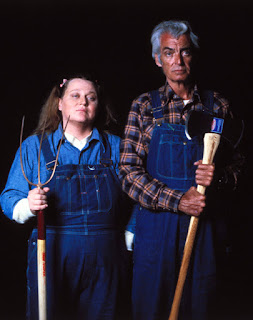 Favorite kill is Nancy Parsons's character mostly because she sucks. You fucking hate this bitch so much that you are really rooting for the "stock", the people that were going to get eaten, when they break loose and rip her apart with their bare hands, possibly eating her. Also, at one point, when the old sausage king is trying to sell his pretty, young lady on human consumption, he tells her that he treats his stock "better than most farmers treat their animals." Jesus, that ain't saying much. Also, this is how basically every farmer justifies killing anything. So yeah... Don't eat meat people.

Best line of the movie needs some context and comes at the end here. So dude is constantly hyping up his meats and shit. Quality of it and so forth. We know it is human and all that. He would lay on the quality think and always tack on "no preservatives" at the end. You don't really give a shit about the "no preservatives" bit because, you know, long pig and all. But he keeps harping on it. Then at the end, with his dying breath, the old guy says, "I'm the biggest hypocrite of them all. My meats... I used preservatives." Pretty fucking funny.

The MVP for this movie has to be Rory Calhoun. Has a couple of solid lines and really just goes over the top with his performance. I like how he seems pretty genuine about all this insane shit that he is saying and then the next minute is pretty much Leatherface. Quite a balancing act this guy has going. Apparently the movie was going to be way fucking brutal with bestiality and shit but they apparently didn't have the money to make any of that shit look real so they went the other way with it and Calhoun was more than happy to just yuck it up. So that was Motel Hell. After writing about it, I'm pretty sure I liked it but it's still trash and that whole dog eating bit left a bad taste in my mouth.