The Ritual is the greatest movie of all time 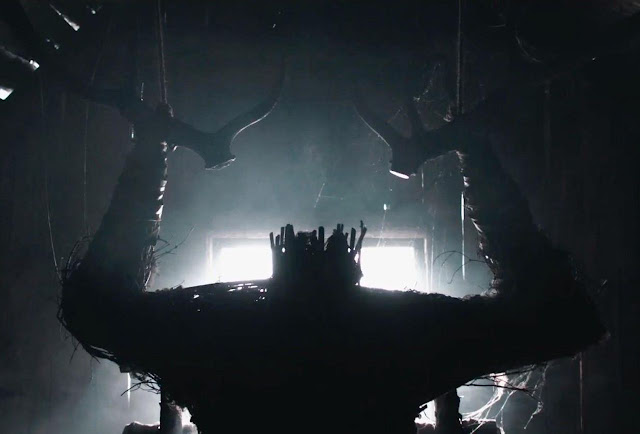 The Ritual. Netflix original. Brittish film. Based on a book of the same name. Imagine it works pretty well as a book. But who the fuck has time for that. Genuinely pretty scary in a slow burn sort of way at first and then in a completely different way at the end. In more of an awed "oh shit" way at the end. So completely different levels; both work equally well in this flick. We get isolation, witchcraft, cults, a terrifying creature. Plus it's a pretty good fucked up male friendship movie. A lot like Deliverance and The Blair Witch Project with a bigger budget and better effects. Great little flick, this movie. Greatest film of all time even.

Rotten Tomato Consensus: Director David Bruckner makes evocative use of the Scandinavian setting and a dedicated cast to deliver a handsome -- if familiar -- horror story. 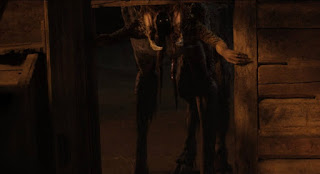 Pros: Pretty solid tension. A lot going on but it all comes together and makes sense in the end. Does a good job of putting us there with the group by presenting various mysteries and such that we figure out with the hikers. The creature at the end is dope AF and completely original/unexpected.

Cons: I've read some pretty polarizing takes on the end. I thought it was solid minus the way they creature treats the survivor dude which I'll get to below. Have a little weirdness in there for what feels like it's own sake that they don't explain at all.

Gist of the thing... Also, since this is newer, spoilers. Four buddies (with what appears to be no hiking experience) get together for a multiple day hike in backwoods Sweden after the fifth among them, Robert (Paul Reid) was killed in a robbery gone bad. One of them, Luke played by Rafe Spall (he was the guy that got his arm broke by the worm in Prometheus and was Yann Martel in Life of Pi [shout out to my cat, Richard Parker]), was present for the killing and there are lot of bad vibes among them based on the guy not doing more, both from the group and his own guilt. Whilst on the trip they discover some unsettling shit that should have sent them right back from whence they came before spending the night in a creepy house with some obvious cult stuff going on in it. From there they are stalked by some sort of forest creature and picked off one by one until two of them, Luke and Dom played by Sam Troughton whom no idea, survive. Those two end up in a rural community that worships the creature that ends up being part Norse deity. 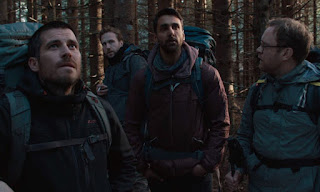 Staring in the film are Spall and Troughton as Luke and Dom (who is the biggest bitch I've ever seen) respectively, with Arsher Ali (who was one of the main tourists, Hassan, in Four Lions) as Phil and Robert James-Collier (who looks like a sexy Jaime Lannister that was in Downton Abbey, which I hear is popular) as Hutch rounding out the last of the group. The was directed by a seemingly up and coming director in David Bruckner who previously worked on segments for the anthology films Southbound and V/H/S and previously directed a film called SiREN which I haven't seen but is supposed to be solid.

All the kills are more or less the same. Only difference is that in some of them we see the creature and in others we don't. Best of these, I'd say, is probably the one we see full frontal at the end when the village is burning down. Luke, having escaped and set fire to everything, including these little human avatar things in the attic that are unexplained and creepy as shit, watches it from afar. This lady bows down to worship the god, an act that usually saves them, but in this case the demigod lifts the her up with his little arms and gently impales her on a tree and we see it. All it's terrifying and awful glory.

Favorite scene of the movie is at the very end when survivor dude Luke is out in the woods with the monster. The monster, actually half Norse god, is keeps trying to force Luke to worship him which is a bit petty for a god but whatever. It keeps forcing him down on his hands and knees but Luke keeps getting up and fighting it which is pretty much suicidal. This keeps happening until Luke gets a weapon, an ax, and attacks the thing, pissing it off. But it buys him enough time to separate himself from the god and gets to the outskirt of the forest which the god cannot cross into. Luke, triumphant after just besting a fucking god, is fucking amped. Screaming at it all like fuck yeah. After all the shit he has been through it is pretty satisfying, intense scene. 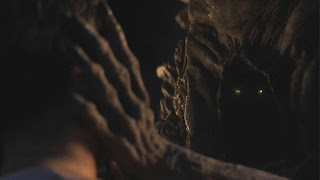 MVP is 100%, as stated, the monster which is not a monster at all but the child of Norse mythological's Loki. First decent look we get at the thing is when the insufferable Dom is tied up, on a stake as an offering to the demigod, and he has a vision that his wife has come up to the camp looking for him. He is all, "what the hell" and she is sweet to him and stuff. But then, suddenly, it's not the wife but this truly horrifying thing (we don't get 100% clean shot here yet). And it does the thing and that's the end of Dom. It is creepy as shit, Dom is tied up on the little stake thing, thinking he is fucked with all the village people down in a prayer type position. He is simultaneously incredulous and terrified when suddenly his wife shows up. He relaxes and is like, "what are you doing here?" She grabs his face and acts sort of sweet to him when he sees that this is actually the monster or whatever and starts screaming. It is fucked and terrifying. It then picks him up and kills him. Picking him up and impaling him on a tree. And we still don't know what the fuck.

If you want a solid explanation of the mythology behind the demigod, this Forbes article is pretty thorough. Below is probably the most pertinent section:

Characters in Norse mythology tend to shapeshift with alarming frequency, and the only defining trait of the jötunn seems to be that they are enemies of the gods. But not always.

Either way, the beast is also described as the spawn of Loki, which is interesting in itself, as the Loki in Norse mythology is way more intense than Tom Hiddleston. The real Loki is completely chaotic - a malicious, mischievous, shape-shifting trickster who sometimes plays the hero, often the villain, and usually, is just messing with the nature of reality.

Loki fathered a menagerie of nightmarish creatures - his children include Fenrir, the monstrous wolf that is destined to devour Odin during the apocalyptic battle of Ragnarok, Hel, the half-rotting goddess of the Underworld, and Jormungand, the Midgard Serpent, which is long enough to wrap itself around the world and bite its own tail.