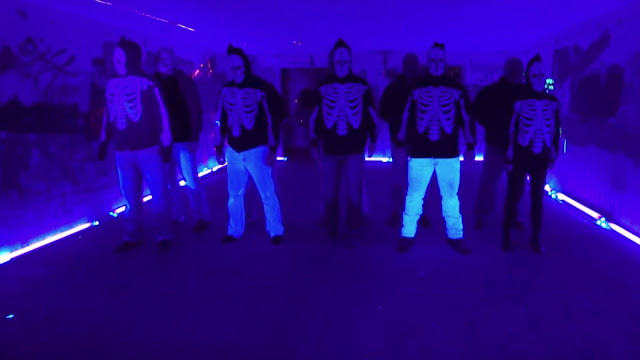 The Houses October Built 2. Trash. Like the first one which I watched last year, the idea is interesting--check out and show us some cool haunts from around the country, go to one that ends up being too extreme, so forth--but ends up being sort of boring and lame. Like watching someone else play a video game, I don't really get into watching other people do something I'd rather be doing. I want to go to a haunted house, one way less extreme than The Blue Skeleton or anagram Find Hellbent from this one, I don't really want to see someone else do it. That is sort of related to why I think it is sort of trash as it's barely a movie. More just showing people go to these things and then loosely tying it to a plot. This one is way less ambiguous than the first which is something that flick had going for it. First it tells us what happened at the end of the first one, they all survived, then the ending of this one it is obvious that they all live and the extreme haunt isn't out to do them any physical harm (they they may have killed off the friendship). Not really all that crazy, really. Sort of just a meh documentary that's fake. It's whatever, I guess. But hey. They made a movie. Better than the one I did in college. But it's still trash and the worst movie of all time.

Pros: Sort of inspiring for the Halloween season. Gets you in that mood and what not.

Cons: Basically the same movie as the first one only more boring. Not much happens. Less intriguing of an ending than the first as well. The ending is weak. The stakes are obviously much lower than in the first one since we find out nothing happened to anyone at the end of the first one. The one lame doll chick is back now only taller. She is wearing a mask so why not use a different child? IDK.

Gist of the alleged film... Getting over being buried alive by a called "The Blue Skeleton" in the first film, a group of 30 somethings that are into extreme haunts go around the country going to more haunted houses, this time with something of a celebrity status from after going viral because of their nearly getting killed for their love of haunts. They go to haunted hayrides and meh haunted houses before doing another "extreme haunt", this one titled "Find Hellbent" which later we see is an anagram for "The Blue Skeleton" which is stupid. This time the extreme haunt is more focused on the dudes of the bunch as we find out that they set up the lone chick in the first one. But where they psychologically scared her, they made the dudes feel uncomfortable for like an afternoon. Yeah. They need her to do the haunts with them as she went most viral or whatever and she is an attractive lady and they are all gross dudes. I thought for sure she was going to freak out and kill someone at the end and then they would reveal it was fake but that did not happen. I thought this, in part, because of this newscast that is supposed to be the last thing to happen chronologically that stays vague but says there was a huge tragedy this time around. I have no idea what that was referring to or what that possibly could have been. 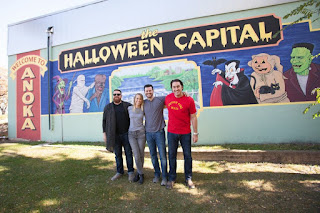 To be clear, this film is much worse than the previous one which was also a Worst Movie of All Time but that one was a close call. It was directed by one Bobby Roe who plays the role of Bobby and produced by Zack Andrews who plays the role of Zack. The other three actors that roll around in the motor-home going from haunt to haunt, all playing the characters with their real first names, are Jeff Larson, Mikey Roe, and Brandy Schaefer as the chick. 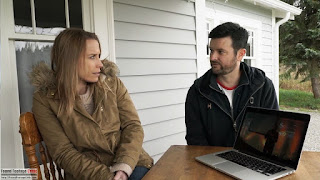 No deaths so that shit is easy. Though they twice coming pretty damn close. The first is when the Blue Skeleton or whatever pumps in sleeping gas to the RV. If you are old enough to remember the Moscow theater hostage crisis from back in 2002 or the 2003 documentary Terror In Moscow, then you know that shit doesn't always end well. So yeah. Lucky to not have died here. Then there is a scene where Brandy fakes her own death by putting a gun in her mouth, it firing a blank, and then a blood pack or squib or whatever going off in the back of her head to make it look like she had blown her brains out. There was a shitty high school mystery novel I read as a child that I somehow remember vividly about a high school stage production where a murder goes down with blanks in the gun because the hot wax or whatever is in there can actually shoot out and what not. I'm just going to assume that is bullshit though as I've only heard that that one time from this book whose name I don't recall. She is still putting a lot of trust in this group that buried her alive the previous year. They could have put a real bullet in there and, boom, you've a dead chick that appears to have committed suicide. I sure as shit wouldn't have done that shit.

As far as the scenes go, I'll focus on the haunts and how bad they made me want to go to some similar shit. Of the haunts they go to the coolest one looked to be the zombie escape room where they had to find a cure before getting turned. The zombie 5K also looked fucking sick and is definitely something I want to do. The haunted hayride was pretty whatever but I do love hayride even though they are traditionally weak. Though the owner jokes about burying them alive which I'm sure was hilarious for Brandy. The big zombie party in Minneapolis looked sweet too. World's largest zombie pub crawl or some such shit. They also participate in a brain taco eating contest against the great competitive eater Kobayashi. This sounds like a great way to get a prion disease and have a horrible death. Kobayashi destroys them, BTW, and they, as amateurs who can't eat for shit, spill the groceries on camera. On a related note, may have to go to there for Halloween some time. 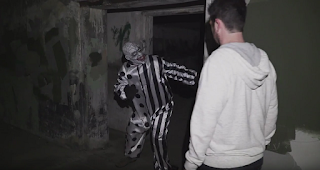 Only line that stuck for me was something an actor at a haunted house said when trying to scare them. It was "You smell different when you are awake," which is pretty freaky. By the way, several people, just random haunt actors, talk about the haunted house network which I'm pretty sure isn't really a thing. I worked at a haunted and know someone who owns a pretty decent one. Never have I heard of this which they act like is last great American union or something.

MVP is I guess Halloween. While this movie wasn't all that great, it did inspire me to go out and do some holiday related shit (once I get time). Likely that weekend before Halloween and the days leading up as I'm taking vacation time to enjoy the holiday. Why watch this trash when you can go to a haunted house yourself though my success rate with them are one in four or so are worth a shit. Plus I didn't know how dope Minneapolis looked or how fun a zombie 5K would be before seeing this shit. So yeah, Halloween celebrations are the real MVP, yo, in this POS, the worst movie of all time.