Re-Animator is the greatest film of all time 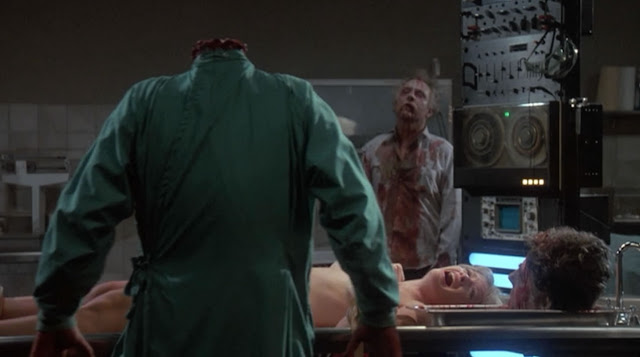 Re-Animator. Remember seeing bits of it as a very small child but didn't know what it was for close to a decade. Remember the headless guy wearing a fake plastic head (why wouldn't he just put his real head back on if he was going to go through all the trouble?) and the scene where the body puts the head between the chick's legs to commit a sex crime. This highly disturbed me but I remembered it though had no idea what the name of the movie was. That was until 1999 when American Beauty came out and sex offender Kevin Spacey talks about that scene with another character. "Oh yeah, that's the name of that movie," I thought. Years went by before I finally watched it all the way through. That came in 2007 when I was in grad school living with a bunch of weird kids in a home like the one the two main characters share in the flick. Only it was the international house, no idea how I ended up there, and there were like eight of us. And no one was banging the Dean's daughter, at least in our house, to my knowledge. But I related to these adult students out there doing their research while on financial aid and all that. Special Edition of the movie had just been released. Bought it on a whim with money I didn't have. Needed to see that shit. Came with a glowing highlighter that looked like a syringe. Came in handy as I was in grad school and all. Humble brag. But I an awful student. Complain-a-brag. Although it disturbed me even more as an adult with that sex crime and all. But overall it was weirder and better than I expected. In fact, greatest film of all time. 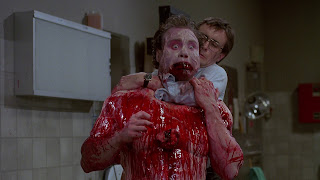 Pros: Totally groundbreaking in terms of gore. Jeffrey Combs is over-the-top and makes the film with his odd hilarity. Barbara Crampton is a pretty lady (unfortunately, bad sexual things happen to her). The zombies and kills are pretty solid. As are the performances. Started the whole HP Lovecraft renaissance (I don't know enough about him to say this for sure but I'm pretty sure he was an antisemite and without him we wouldn't have Scientology so maybe not such a good thing... But Cthulhu!).

Here's the gist... Medical student Herbert West, played expertly by Jeffrey Combs, creates a serum that reanimates dead brain tissue. His roommate, one Dan Cain played by Bruce Abbott, and his roommate's girlfriend, the daughter of the Dean, Megan played by the lovely Barbara Crampton, eventually discover that West has killed and is experimenting on Cain's dead cat, bringing it back to life. Impressed, Cain goes to the Dean with the research which gets his student loan revoked and West kicked out of school resulting in them sneaking into the morgue to bring a corpse back to life. Once the corpse kills the Dean, their medical professor, Dr. Carl Hill played by David Gale, who is jealous of West and Cain , West for his invention and Cain because he wants to bone Crampton, tries to steal the serum which gets him killed. For some reason West decides to bring Hill back which results in him immediately attacking West and creating his own undead army, resulting in some wild ass shit.

Directed by Stuart Gordon who did go on to do some other shit, most notably Castle Freak, he hasn't directed a film in over a decade, which is fucking bananas. Regardless, "creator of Re-Animator" will surely be on his tombstone, which sure as shit is nothing to be ashamed of. Loosely based on the 1922 Lovecraft novelette Herbert West–Reanimator, it was originally supposed to a theatrical stage production which all the actors rehearsed for, knowing their roles extremely well that totally shows through in their various performances, but was revised as a television pilot before getting retooled into a feature film at the last minute.

Some shit I'm not about in this movie is that cat that is dead in the fridge is a real dead cat. Way too much for my sensitive ass. I'm hopeful it died naturally and what have you. But still. No like. I love little kitties, especially my Richard Parker. West, who did the killing, is just like "what are you doing in my room" when they catch him. They are all "what the fuck, bro, you killed my cat" but don't really flip out like they should, sort of buying his story about her getting her head stuck in a jar and suffocating. I'd probably be throwing him out of the house forcibly if I were in said situation. 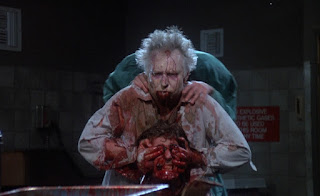 Several candidates for the best line. One comes when Hill is going on about how humans are "dead" after the brain has been depleted of oxygen for 11 minutes or whatever and West is getting all pissed, which would be weird. As Hill goes on, West keeps snapping pencils, pissing Hill off and breaking his concentration every time he does it. Finally, raging, screams out, "Mr. West, I suggest you get yourself a pen!" Or when West finally kills Hill and tells Cain "I had to kill him." Cain: "He's dead?" West: "Not anymore." But my fave is when the disembodied head of Hill is talking shit to West about how he is going to win the Nobel Prize by stealing West's invention. West has two killer lines here. They are: "Who is going to believe a talking head? Get a job in a sideshow." Burn.

Best kill, for me, is not only the most gruesome, it's also the most satisfying. It's the one at the endish when the Dean, a crazed reanimated corpse himself, smashes Hill's head with his bare hands, ripping it apart at the eye sockets, and then throws it against the wall for good measure. The one with Arnold
Schwarzenegger’s real stunt double, the beast they turn in the morgue played by one Peter Kent, is also pretty solid. After he kills the Dean, Combs takes one of those surgery buzz saw things and puts it through his chest.

Best scene is not the most memorable. Most memorable you know before I even mention it. It's the one where Hill's decapitated head goes down on a screaming Crampton. It's a hard scene to watch. First, the Dean, her father, now undead, plops her onto a gurney and removes her clothing so that that could happen. Then it does and she is fucking screaming as he licks his way down from her breasts to her vagina before it finally stops. It is fucked. If you listen to the audio commentary for the movie everyone--the one I listened to featured stars Abbott, Combs, Crampton, Robert Sampson who plays the Dean, and producer Brian Yuzna. In it Sampson said that Gale "felt spiritually bereft" after the scene and expressed how awful the whole thing made him feel. His wife, however, didn't think he felt bad enough according to Yuzna who said "after the first screening she split on him" and never came home after seeing the film. That, IMO, though, is not the best scene. That would be when West, Cain, and Megan think they have the upper hand on Hill and are about to put an end to his out of control murder spree and what not when Hill reveals that he has reanimated all the corpses in the morgue and lobotomized them to better control their minds. All hell breaks loose here. Shit gets cray with gore and chaos everywhere. Easily my favorite scene in the movie. And though it is something you know is going to happen, it still comes as sort of a surprise with the way they set it up. Spoiler. But I shan't give away how it concludes which you can probably figure out.

Combs is the obvious choice for MVP though Gale gives him a run for his money. Also Crampton, like Combs, has some real horror chops and is great in this, but she is no Combs. Honestly, I think everyone is great in this as Abbott is pretty much perfect too. But it is Combs that delivers all the great one-liners and is so fucking believably weird and neurotic. Perfect creep, this guy, and has been used as such in every film he's been in ever since. Just saw him do his dog and pony show in the show Stan Against Evil which I highly recommend. It's a show about these a retired New Hampshire sheriff, played by John C. McGinley who was Dr. Cox on Scrubs, who teams up with his replacement, a lovely actress I've never seen before named Janet Varney, to battle evil in their tiny New England town. Made me love it even more that they bring in people like Combs and other guest stars from cult horror flicks. Love that guy. Also, this movie.