Halloween: Resurrection is the worst movie of all time 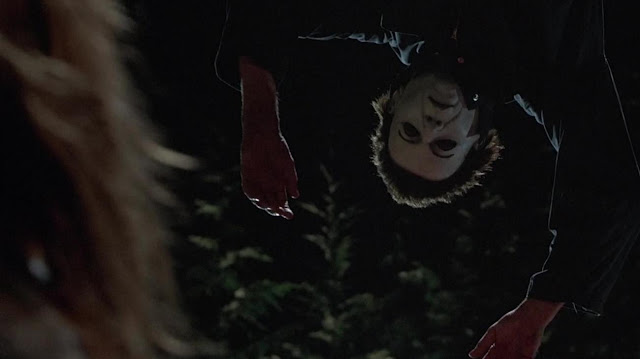 Halloween: Resurrection. Trick or treat, mother fuckers! Direct sequel to Halloween H20. The stuff of myth. Was it as bad as everyone says? Yeah. It was. Probably not as legendarily awful as I was led to believe. It was in no way good but it was on occasionally entertaining and technically sound. I'm pretty sure it was supposed to be campy so some of it was sort of humorous but never what I'd call funny. When looking at where the franchise has gone, from one of the greatest horror movies of all time in the original Halloween to this POS, it is easy to see all the outrage. Looking at the franchise as a whole, which I'm going to officially do after the new Halloween comes out, I'd put this at the bottom with Halloween 5: The Revenge of Michael Myers. Maybe below it. It is trash and is the worst movie of all time...

This was actually my first viewing of the movie. When it came out my parents tried to get me to watch it but I was pretty good with the way they ended H20and wasn't interested. I assumed, wrongly, that Myers indeed was dead and this was his ghost or whatever coming to kill folk. Sort of a Michael Myers tulpa. But no. He managed to outsmart Laurie, we see that she actually killed an EMT that Myers choked out and changed clothes with. Fucking dumb. But here I am. Finishing up the franchise. No more Halloween until the new one. Thank fuck. Thinking I'll do the universally hated Rob Zombie remakes next year. Watched that by my lonesome in grad school. Snuck into it after 3:10 to Yuma, another remake. Little secrete for ya. Actually liked it. Though I thought the second one sucked. 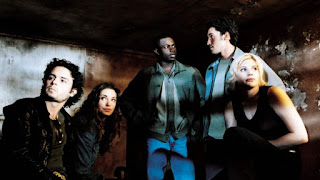 Rotten Tomato Consensus: The only thing this tired slasher flick may resurrect is nostalgia for when the genre was still fresh and scary.

Pros: Slightly funner than I want to admit. Decent body count but the kills are generally terrible.  Myers looks cool. Like the mask and the way he moves. That's about it.

Cons: The way they kill off the iconic Laurie Strode is offensive. So many why-is-this-happening and no-one-would-ever-do that moments. The technology aspect is insane. People at a party stopping to watch a live stream of ghost hunters at the Myers's house. The dude calling 911 convinced, rightly, that it is real. Because he is right it doesn't seem that stupid but it totally is. What else. Many of the characters are irritating. Busta Rhymes's character is pretty awful. Tyra's is the worst.

The gist, if you will... Starting in an insane asylum, Michael Myers finally kills his sister, Laurie Strode played by Jamie Lee Curtis, before going back home where a documentary film crew has set up shop and plans on doing a reality show with teams trying to find (planted) clues and spend the night for cash while their exploits are broadcast live on the internet. He comes back to the house, which we see he has been living in in this secret tunnel for the last 23 years, and is all, WTF, and does him some stand your grounding, killing a bunch of old ass and irritating college kids as well as people working on the documentary including Tyra Banks who is like co-owner of "Dangertainment" along with Busta Rhymes.

Directed by Rick Rosenthal who also directed Halloween II but pretty much nothing else that anyone has seen. Besides the three aforementioned, the movie stars the following who play the various archetypes: Bianca Kajlich as survivor girl Sara, Luke Kirby as the dark artist dude Jim, Daisy McCrackin as the I guess sort of slutty chick Donna, Thomas Ian Nicholas who is the loser Kevin in the American Pie films as hornball Bill, Katee Sackhoff as irritating blonde Jen who is sort of the clown of the bunch, Sean Patrick Thomas from Save the Last Dance as black dude Rudy, and Brad Loree as Myers. Quick fact about McCrackin, the one who gets neked and plays redheaded Donna. She and buddy/actor Joseph Capone were kidnapped out of her home by three psychopaths in 2017. Capone seemed to have gotten the worst of it as he was pistol-whipped, stripped naked, and tied up and thrown in the bathtub for 30 hours while the assailants drove McCrackin around demanding she withdraw $10,000 for them to release her friend. She ended up writing them a check, eventually, and once they dropped her off at her home, she went to the police. Capone was saved and the kidnappers caught. Here are some of the details as told by Capone if you are interested. Most of the articles sort of imply that McCrackin might have been involved, which is fucked and shite journalism.

Best line of the movie has to be "trick or treat, mother fucker" uttered by Busta Rhymes. The dialogue in this movie is pretty awful. Looking back over some of the memorable quotes, they are indeed garbage. Especially the shit that Busta Rhymes says. Three random examples include "Looking a little crispy over there, Mikey. Like some chicken-fried motherfucker. Well, may he never, ever rest in peace." after electrocuting Myers; and "Hey Mikey, happy fucking Halloween!"; and "Let the dangertainment begin up in this motherfucker!" That isn't even getting into the part where he berates Myers for like three minutes when he thinks he is his employee. Side note, I really wouldn't want to work for Busta Rhymes. Which brings me to the shit of which the berating is a part.

There is indeed a decent amount of shit in this movie. First, there is this unexplained freshmen in college duo that shows up at the beginning. They are going to a Halloween party later where one of them ends up posting up in someone's dad's office where he watches the live stream. He says his online girl friend is going to be on the show. Total catfish situation but she ends up being the survivor girl and he sends texts to her palm pilot telling her where Myers. Occasionally someone will walk into the room this kid is hunkered down in and will be like, "what the fuck are you doing?" He will say something like, "watching Dangertainment," and the person will be "cool" and then start watching said horseshit. When people start dying he is convinced it is real which is the dumbest fucking shit I have ever heard. This kid shouldn't be allowed to watch TV. There is also this infuriating scene where the camera guy is setting shit up in the Myers's House and Tyra is talking to him and what not. The camera is on and she can see everything that is going on. Except when Myers shows up and kills the guy she dances around her trailer making coffee. "What the fuck is happening?" is all I can say. Then there is the scene where Busta kung fus Myers and then shocks his balls in the final fight at the end. It was almost funny, and sort of is remembering it, but at the time I watched it, it was just infuriating.

Best kill is the kid from American Pie. He was trying to get laid by the annoying crazy blonde girl who later gets decapitated in front of everyone when they think this is still a goof. She previously screamed in a crying wolf situation which is fucking cliche and fucking stupid to get everyone's attention I guess and pisses everyone off (though it doesn't come back to bite her in the end or anything) and then sort of acts like she is into American Pie dude and that she is going to show him some tit. She pulls her shirt up a little and then laughs like an idiot. American Pie dude goes to the bathroom to bitch in front of the mirror when out of nowhere Myers busts through, scaring the piss out of me, and stabbing dude. It is a legit scare.

MVP, god, IDK. Probably JLC. She is a fucking pro and all and does fine for the little she is in the movie and what she has to work with. She catches Myers in one of those snare traps that loops around your leg and hangs you upside down. So there he is swinging and what have you when she remembers that other guy she killed. She goes to rip his mask off to be sure when he grabs and stabs her. She kisses him and falls to her death. Ladies and gents, the death of Laurie Strode. The movie is a huge piece of shit but she is fine. Also, the guy that plays Myers, Brad Loree, does a pretty serviceable job. People that were not awesome include everyone else. Especially Tyra. Jesus fuck, man, is she worthless.

Overall, the movie is so bad that they had to reboot. I'd just ignore this film altogether. Even if you are a completist, you'll still better off leaving this out and treating H20 as the true ending of the film which this completely undoes, making the guy Laurie kills some dipshit EMT. And we are done with the Halloween francise until the new one comes out here in a couple of weeks and then next year when I rewatch the Rob Zombie movies.