The Happytime Murders is the worst movie of all time

The Happytime Murders. Fucking train wreck. Worse than the previous Melissa McCarthy movie I saw this year that was also a fucking train wreck. That one was Life of the Party which I'll probably never write about at this point. Didn't do a write up on it because I was trying to stay positive back when. Now that I have given that shit up, here is a huge piece of shit for you to read about, if that is what you want to do. Easily the worst movie I've seen this year, this was the worst film of all time.

Rotten Tomato Consensus: The Happytime Murders wastes its intriguingly transgressive premise on a witless comedy that blindly pushes buttons instead of attempting to tell an entertaining story. 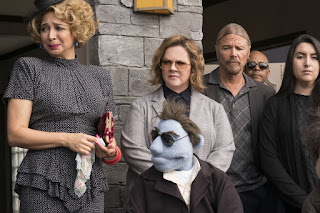 Pros: Maya Rudolph is great, as always. Elizabeth Banks is a pretty

Gist... Puppets from a 1990s children's show, Happytime, start getting killed off by a mysterious killer. One of the victims has brother who is a disgraced LAPD detective now working as a private eye that also once dated the human lead, played by Banks, and looks like Kevin Nealon takes the case to find who is killing off these Sesame Street rejects. Along the way his former captain, who eventually likes him for the killings, reinstates him as a consultant and pairs him up with his old partner, played by McCarthy, who hates his guts. Premise had potential but again, shit ain't funny. Don't go watch it. 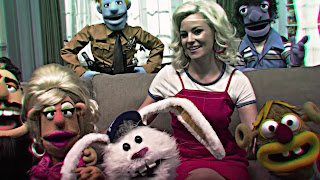 Here is some weirdness... The movie was directed by one Brian Henson, chairman of The Jim Henson Company, who is Jim Henson's son, which is insane. He even directed two Muppet movies one of which was 1992's The Muppet Christmas Carol which is easily my favorite Muppet movie and Christmas Carol movie. So this was not only endorsed by the Jim Henson estate, it was actually made by it. A movie about puppet murder with puppet sex/ejaculation and flashes of puppet vag. All of this was so ill advised that it is un-fucking-believable and I'm willing to bet the last feature film out of that arm of the company.

Anyway, the movie stars McCarthy and this Bill Barretta who plays the puppet PI, Phil Phillips. No Sam Spade, either of them. Also in the movie are the likes of Elizabeth Banks as Jenny the only human on Happytime, Leslie David Baker whom you'll recognize from his role Stanley on The Office as Lt. Banning, Joel McHale as Agent Campbell of the FBI, and Maya Rudolph as Phillips's secretary Bubbles.

The kills, for their part, were pretty solid with multiple candidates for best of the movie. Probably my personal favorite, and the only time in the movie where I genuinely chuckled, was the protagonist's brother who got ripped apart by dogs, which is a constant threat with these guys. They rip them up like typical dogs would a chew toy with stuffing all over the place. They catch the culprit and it is a tiny little Boston Terrier. So cute. Looks, and acts, just like my little Lu. Honorable mention was the quadruple homicide in the porn shop when everyone in there gets plugged with a shotgun and their heads explode with a puff of stuffing. 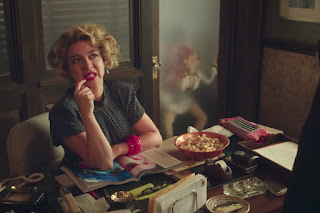 On the other hand, not a lot of good one-liners nor scenes that really impressed. For best line, the one I'm going with is "He's a blue loser puppet with a tiny felt cock." It's just meh, like the whole movie. That also applies to the best scene which I'd say is likely the Basic Instinct allusion where the little red-headed puppet flashes her vagina, made of velvet, we learn, and we get a view of an insane amount of purple puppet hair. It is gross and insane and sort of funny but not really. The red-head, by the way, is a bizarre twist on the Femme Fatale if you are familiar with noir trope where the PI is setup by a sexpot which becomes his undoing.

MVP is an easy one in Maya Rudolph. She really brought it. The only moments of the film I enjoyed were the ones with her and McCarthy together, much like Life of the Party. She was sort of funny and I enjoyed when she was on screen though I thought they under utilized her. She is a real gem, this chick. But yeah, don't see this movie. Totally not worth your time. I know. Sounds like a solid premise. Trust me. You'll regret it.